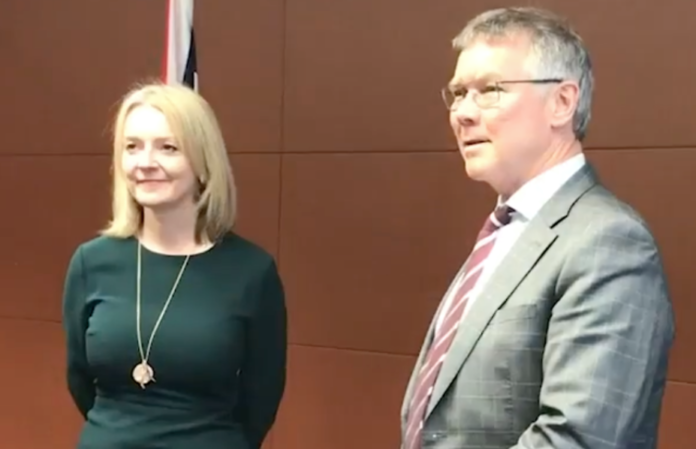 RNZ this morning reports Ms Truss as saying.
” It’s one of the first free trade deals we expect to strike.”

In the great scheme of things we are a small economy. What makes us suddenly so important to the UK?

The answer, I suggest, is the CPTPP- the revised 11 member former Trans Pacific Partnership Agreement created when Trump pulled out of it.

Yes I know that Britain’s shores are washed by the Atlantic Ocean and not the Pacific, but Japanese Prime Minister Shinzo Abe has already stated that, post-Brexit, the UK would be welcomed into the agreement “with open arms”.

When it comes down to what Big Money wants to do geography is not important.

So, my guess is that the current British government considers New Zealand an easy prey economy – a pawn in an endgame strategy of gaining access to 10 other,much larger, economies.

And why should we be concerned about that?

Because neoliberal economics has become embedded in these “trade” agreements and because a major export of the UK is what are euphemistically called “financial services” – which is another way of saying money making money out of money.

In 2018, the financial services sector contributed £132 billion to the UK economy roughly 50% of the which was generated out of the City of London and of course Brexit allows them to expand their operations.

A couple of years ago I made a documentary with the title “Who Owns New Zealand Now?”

You can find it here –

Given that our Labour led givernment has not given up neoliberalism you will understand why I am eyeing the wheeler -dealers of The City of London and asking the question I think we should all be posing ourselves:

In a post Brexit world… Who could end up owning New Zealand tomorrow?