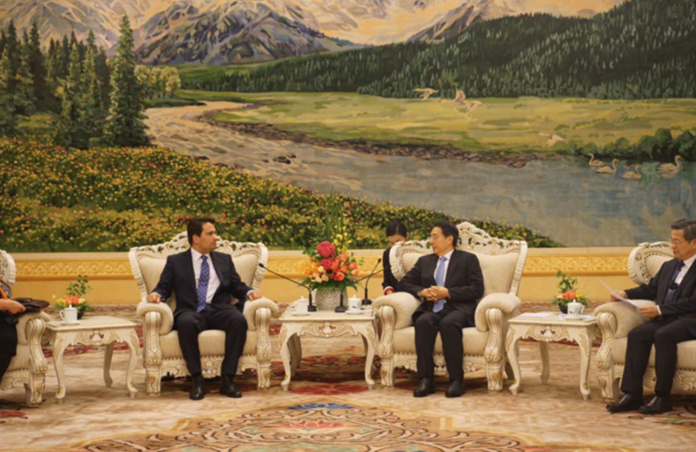 it would be difficult to find a time since the Tiananmen Square massacre when China is being more abusive towards human rights.

So National’s visit to China would be difficult enough as it is with those issues, but because of National’s unique subservience to China, where so many National MPs have private business relationships with Chinese interests, the trip is even more alarming.

Watching Simon Bridges meet with the Head of China’s Secret Police alongside Gerry Brownlee who is the NZSIS spokesperson and chaperoned by Dr Jiang Yang who is accused of being a Chinese spy should be raising alarm bells within the mainstream media, but the media are too busy focusing on a failed Block auction, MAFS scandals and Labour Party scandals.

Bridges astounding praise of China on Chinese State media looks less like an interview and more like a hostage video.

“But to run the woke line that some of you love so much on Twitter that that somehow means we shouldn’t be visiting and we shouldn’t be having a relationship with a superpower that we trade with more than any other country in the world, I think is pretty irresponsible.”

…Bridges has understood what Brexit, Trump & ScoMo knows – politics via social media is about enraging the perpetually offended who amplify their subjective fury to a wider electorate who recoil from that anger and push them towards him.

Simon Bridges has launched an extraordinary attack on attempts to curb terrorist content online in the wake of the Christchurch attack.

Jacinda Ardern is working with social media bosses to prevent the spread of extreme content, but Bridges claims it’s a waste of time and that New Zealanders don’t care.

The Prime Minister met with Jack Dorsey of Twitter on Monday to discuss the issue.

…Bridges gets that the Dark Art of politics now is not in the proposal and debate of ideas, it is the promotion of anger as policy which is communicated to potential voters via social media based on the outrage it generates amongst identifiable tribal protagonists.

The more the woke scream at Simon, the more those alienated by the Woke side with Simon.

National’s acquiesce to China is concerning enough, Simon’s mastery of the lessons from Trump, Brexit and ScoMo is down right frightening.

Don’t write him or National off for the 2020 election.