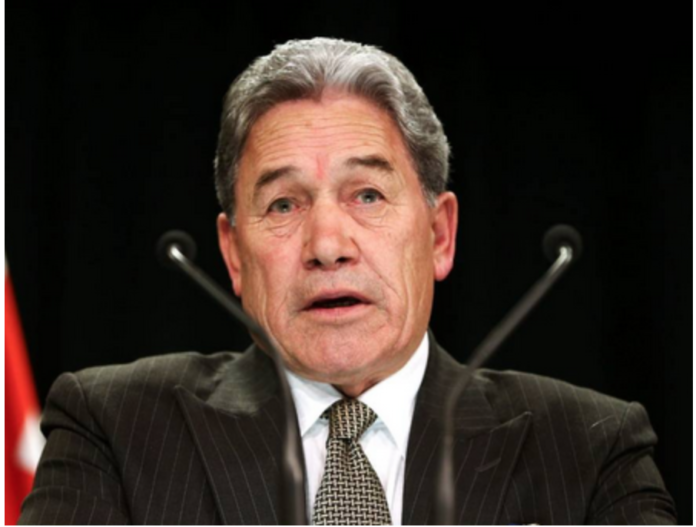 On 25 August we sent an email to the NZ Minister of Foreign Affairs, Winston Peters, essentially similar to those already emailed to Jacinda Ardern and Ron Mark, concerning the Ministry of Defence proposal to purchase $9 million-worth of military equipment from Israel, and asking that the order be cancelled. The responses from Jacinda Ardern’s Office and Ron Mark can be seen in previous blogs.

Our emails closed with a summary requesting that they clarify the New Zealand Government’s position regarding:

■ The proposal that New Zealand should contribute, through trade, to the profitability of the Israeli military

■ In view of the evidence presented [in our emails] and in greater detail online, is the NZ Government willing to declare it unequivocal support for international law with regard to the security and human rights of the Palestinian people living under alien military Occupation?

In October 2017, The Jerusalem Post welcomed the appointment of Winston Peters as New Zealand‘s Foreign Affairs Minister because he was critical of this country’s sponsorship of UN Security Council Resolution 2334, which the online newspaper described as “an anti-settlement UN resolution that set back ties between the two countries.” The Jerusalem Post also quoted a comment by Politik NZ, the news and analysis website, saying that “the argument about the process has become a proxy for opposing the resolution altogether” with the conclusion that “Labour’s concession to Peters amounts to an indirect acknowledgment that the resolution was wrong.”

In accordance with the universally-accepted provisions of the Fourth Geneva Convention, United Nations Security Council Resolution 2334 simply reaffirmed that the establishment by Israel of settlements on militarily-occupied Palestinian territory “has no legal validity and constitutes a flagrant violation under international law.” In passing Resolution 2334, the Security Council reiterated its demand that Israel immediately and completely cease all settlement activities in the Occupied Palestinian territory, including East Jerusalem, and that it fully respect all of its legal obligations in this regard. The Security Council also called for immediate steps to prevent all acts of violence against civilians. With no votes against the Resolution, the Security Council Chamber greeted the result with applause. The then Foreign Minister, Murray McCully, welcomed the adoption of Resolution 2334, saying “New Zealand voted for and co-sponsored the resolution because it was consistent with long-held New Zealand policy positions on the Palestinian question”.

Speaking after the vote, New Zealand’s Permanent Representative, Gerard van Bohemen, told the Security Council “every settlement creates false hope for the settlers that the land will one day be part of a greater Israel.” The imposition of Israeli settlements on belligerently-Occupied Palestinian land also constitute a war crime under the provisions of the Rome Statute of the International Criminal Court. In addition, they violate a number of conventions, including United Nations Security Resolutions 446 (1979), 452 (1979), 465 (1980) and, most recently, 2334 (2016). Opposition to Resolution 2334 therefore means siding with Israel against international norms.

The illegal Israeli Occupation and settlement of Palestinian territory is demonstrably malevolent, and purposeful. One glaringly obvious aspect of this is dealt with in a UN report on the Israeli Occupation’s repressive diversion, depletion and control of Palestinian water resources. The end goal is to make life so unbearable for Palestinians that they will be forced to leave their land. The report notes the failure of the international community to protect Palestinian water resources. Here are recent accounts of the suffering and injustice suffered by just two Jordan Valley communities in the villages of al-Hadidya and Bardala.

The Israel Institute of New Zealand informs us that our Defence Minster, Ron Mark is a member of the NZ-Israel Parliamentary Friends Group, the group’s chairman is National MP Alfred Ngaro and the Israeli Ambassador, Dr Itzhak Gerberg, was a welcome guest at the group’s official launch.

There are, of course, voices in Israel poles apart from the Zionist regime that the Israeli Ambassador represents. For example, there is B’tselem, which “strives to end the Occupation” as “the only way forward to a future in which human rights, democracy, liberty and equality are ensured to all people, both Palestinian and Israeli, living between the Jordan River and the Mediterranean Sea.”

Another organisation, close the Israeli military, is Breaking the Silence, “an organisation of veteran combatants who have . . . taken it upon themselves to expose the Israeli public to the reality of everyday life in the Occupied Territories.” Breaking the Silence provides video evidence and personal testimony that reveal the “reality in which young soldiers face a civilian population . . . and are engaged in the control of that population’s everyday life. Our work aims to bring an end to the occupation.” Then there is ICAHD, the Israeli Committee Against House Demolitions. ICAHD is a non-violent group “dedicated to ending the Israeli Occupation and achieving a just peace between Israelis and Palestinians.” They focus on “Israel’s policy of demolishing Palestinian homes (close to 50,000 in the OPT since 1967)” as well as “the need to hold Israel accountable” and “the human cost of occupation.”

There is a universe of difference between Judaism and the racist European Zionist ideology that invaded the Middle East and attempts to lobby its will over Western democracies. Rabbis for Human Rights describes itself as the only rabbinic voice in Israel that is explicitly dedicated to human rights. Representing different streams of Judaism, Rabbis for Human Rights bases itself on Jewish tradition and the Universal Declaration of Human Rights. The rabbis work closely with persecuted Palestinians, particularly in helping them to protect their agriculture and precious resources, such as water.

All these organisations have one thing in common, and that is outspokenness for justice, based upon irrefutable example and argument. Compare them with the guarded rhetoric of some. Try as we may, it is likewise impossible to get a clear and specific declaration of policy from groups such as NZ Friends of Israel, or even the NZ First Party, when it comes to Israel and its human rights abuses. The Jerusalem Post and others may draw reasonable conjecture regarding our Foreign Affairs and Defence Ministers’ ideological leanings and loyalties but the Ministers themselves remain quiet. Winston Peters may express criticism of this country’s sponsorship of UN Security Council Resolution 2334 but he cannot, or will not, challenge one iota of the principles of international law upon which the Resolution is based.

On 26 October 2017, the Secretary of Foreign Affairs and Trade, Brook Barrington, gave a briefing for the incoming Minister of Foreign Affairs, reminding him that besides projecting New Zealand’s values, a primary role is to “support the Prime Minister’s leadership diplomacy role. The Prime Minister’s role is central to New Zealand’s . . . projection on the world stage. You also provide strategic advice to the Prime Minister . . . in her foreign policy role.” Power and influence indeed! The Ministry of Defence enthusiasm for the purchase of $9 million-worth of military equipment from Israel speaks volumes. It is sad that Peters and Mark are allowed to serve Israel’s strategic and material interests with so little debate or justification. We must keep calling them to account. The more they hedge and evade, the clearer it will become that there exists a hidden agenda.

Netanyahu “we will stay here forever”

So far, we have yet to receive a response to our emails from Winston Peters. Meanwhile, Israel continues its implacable rule over Occupied Palestine, convinced that its immunity will be maintained by inaction and silence on the part of Western-aligned governments and their politicians.

Meanwhile, on 4 September, Israeli Prime Minister Benjamin Netanyahu visited Hebron and took his contempt for international law a step forward. He made an uncompromising speech in front of the Ibrahimi Mosque, declaring “we will stay here forever”, adding “the people of Israel are deeply entrenched in Hebron. From our very beginning, we belonged here.” The gathering was a commemoration of the 1929 ‘Buraq Uprising’ in which 133 Jews and 116 Palestinians lost their lives. Most of the Palestinian victims were killed by British colonial forces, while some were killed during Jewish attacks on Arab communities.

The Times of Israel reported Knesset Speaker Yuli Edelstein and Culture Minister Miri Regev speaking at the meeting and calling for an extension of Israeli sovereignty to Hebron. Edelstein asserted that ”the time has come for the Jewish settlement in Hebron to grow to thousands of residents”. Miri Regev reminded Netanyahu of his commitment to extend Israeli sovereignty to settlements in the West Bank, saying: “There is no better place to start bringing that pledge into fruition than Hebron”. She went further, asserting that, “If there’s no Hebron there’s no Tel Aviv.”

The Zionist regime employs thousands of soldiers and more than 20 military checkpoints to deny freedom of movement for Palestinian residents of the Old City of Hebron. While more than 30,000 Palestinians there are subjected to a strict permit regime, 800 extremist foreign settlers not only enjoy freedom of movement but also treat their Palestinian neighbours with contempt and violence. It is time the international community shouldered its responsibility to protect the UNESCO World Heritage Sites of Hebron Old City and the Ibrahimi Mosque, as well as their people.

Winston Peters no doubt believes that, by keeping silent, people will lose interest thus enabling himself and Ron Mark to continue to serve Israel’s interests. Don’t let them get away with it! Keep on at them until they declare their hand. It’s time Jacinda Ardern took them in hand. If they are opposed to UNSCR 2334, let them state clearly why they reject the fundamental provisions of international law that sustain it. The weakness of their position is that their silence can be taken as an admission that they have no argument. Demand answers!