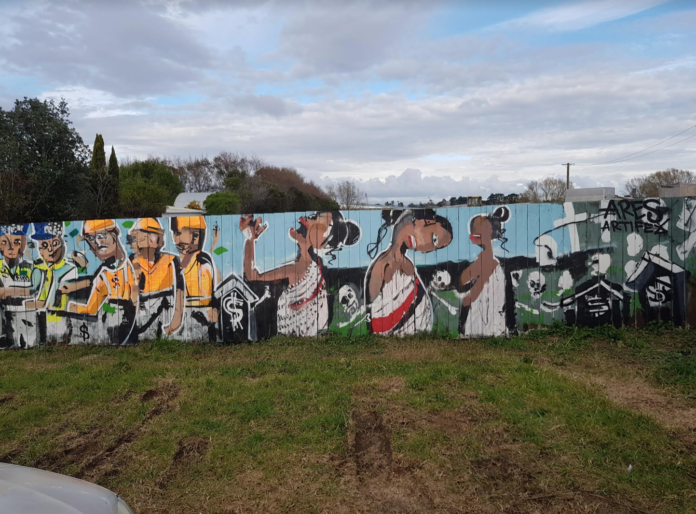 There was no police presence there on Friday afternoon, when I, my colleague Grant, and my injured leg (it has its own presence at the moment) set off across the enforced cordon sanitaire to visit with those staying on the land.

The presence was in the absence, as the long (from my leg’s perspective) walk along the country lane was imposed by the police.  Why they did this (either to act as a barrier to supporters coming in, or as a deliberate ‘distancing’ of the protest from the outer world), I do not know.

But, actually, it was a good thing.  That walk allows the peace of the area to fall upon you.  The beauty is enhanced by the quiet solitude. The water glistens in the near distance, the green hills roll around you, history is close to the surface. Just over the rise is the Stone Fields, where Māori engaged in creative farming practices to feed their people.

And frankly, the thought of four hundred houses being built on such beautiful land, in a city where ‘harbour view’ now means ‘expensive house prices’ rather than ‘a place to commune with the extraordinary natural beauty of Aotearoa’, is hard to swallow.

It is time once again to question our values.  That the effects of raupatu – land confiscation – are still with us.  That we are no better than our northern hemisphere mates in allowing over-building and the elimination of beauty in the name of profit (it is just that we have come later to this).  That our values are destroying much that is of beauty in this land. That the colonising values are still with us, 250 years after Cook arrived in Aotearoa and proceeded to demonstrate the so-called superior navigation skills of white people, making himself look very stupid in the process.

But Jacinda is no ordinary Prime Minister.  She is the recipient of international adulation for standing up for the people, for peace and for unity in the wake of the Christchurch bombings.  From my conversations with the people at Ihumātao, they are looking for the same treatment. They want Jacinda Ardern to stand beside them, to say we are all one together (kotahitanga) and to show that she understands the plight of the tangata whenua and their land.

She should also see for herself the beauty and peacefulness of the land, although I doubt she would be required to walk through the cordon sanitaire herself, even though she should.

Now that is a lot of shoulds.  And I know that people will be screaming in her ears that it is not safe, it is not politically wise, it is not sensible to go there now. They would do so to any politician.

Yet, internationally, many people have seen in Jacinda a person who will stand with the harmed, the oppressed, the powerless and the needy.  A Gandhi, if you like, a person who walks with the oppressed. In some senses this quality is over and above her role of Prime Minister, although it is the combination of her empathy and her good leadership that has made her so treasured among my international friends.

So, against all the security advice and conventional political wisdom, and as a person who sees immense value in our leader, I think Jacinda should visit that place as soon as possible.  It should be low key, not flanked by a huge posse of Ministers and advisors. And she should stand with those beautiful and gentle people who I met on Friday, and talk to them, and look and learn and hug and hongi.

To heal the harm and take a step on the long road towards a decolonised future.