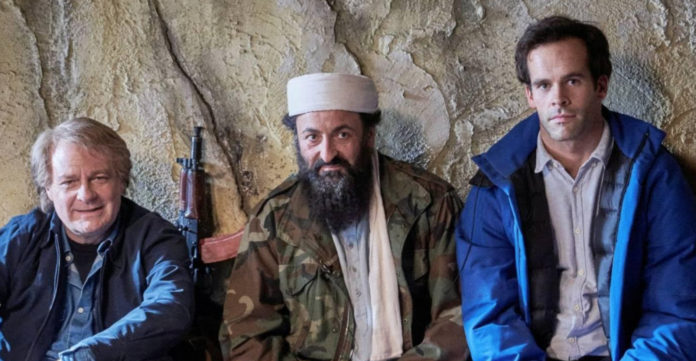 John Laing, a director and old friend, rang me three or four years ago and asked was I interested in writing a TV feature about CNN journalist Peter Arnett finding and interviewing Osama bin Laden in the 1990s.

An Auckland producer, James Heyward, had had the idea for it. It was to be aimed at a slot on TVNZ 1’s popular Sunday night seasons of dramatised local real-life stories.

Sure, Bin Laden wasn’t exactly from New Zealand—though he’d worked on his family dairy farm—but Peter Arnett was from Southland. It would make a change from the usual real-life tales of sport and crime.

Then John added those magic words about the producer which instantly animates all writers: “I’ve found James pretty good at raising a budget.”

It was ages since I’d had TV work. I’d been making programme submissions to local production companies down the years but this was more like some sort of annual religious observation one goes through before returning to real life.

The last thing I’d written for TV was years ago, a feature, a dramatised doco about Jim Edwards and the Auckland unemployed riots of 1932. Ian Mune had directed it, doing a brilliant job full of flourishes that matched the surreality of the period. It was ordered cut back from 90 minutes to 75 by a horrified TVNZ, shown on its Sunday night slot and got the lowest viewer ratings in the history of local New Zealand television drama.

I checked out the Peter Arnett story.

Osama bin Laden, fresh from defeating the atheist Russians in Afghanistan in the 1980s (with American-supplied weapons), had turned his sights on Washington. He had declared war on the infidel United States.

He was in exile from Saudi Arabia and this was causing him grief. Saudi Arabia was his homeland, the land of the Prophet, and totally in the pocket of the Americans.

In the mid to late 1990s he was hiding out round Tora Bora in Afghanistan, hosted by the Taliban. He was constantly thinking and writing about the way Russia’s invasion of Afghanistan had unified Islam and led to the downfall of the Soviet empire. Since then Islam had fractured. It had returned to being a little people. How, then, to unify Islam once more and make it great?

He had his own army, al Qaeda. They were one of a number of Muslim fundamentalist groups that had spokespeople placed in London.

In fact London was becoming known as Londonistan.

On the CNN payroll at the time was New Zealander Peter “Live from Baghdad” Arnett. He decided, here was a good story.

He visited the al Qaeda HQ in Dollis Hill and got the okay to interview bin Laden who was looking for international attention.

Arnett then had to get into Afghanistan, which had its borders closed to foreigners. At the main crossover point from Pakistan, the trees were festooned with camera film that had been unreeled and draped about as a warning to photographers and camera operators.

One of Arnett’s fears was he and his small crew might be followed by CIA operatives and become collateral damage in a missile attack on bin Laden, whose whereabouts was much sought after but still unknown to the Americans.

Finally he met with bin Laden and did his interview.

And here was my major problem. Major, major.

The whole show hinged upon this interview. Like Frost/Nixon.

As a piece of drama, the interview was a dud—apart from the last thrilling question-and-answer:

“What do you have in store for us next, Mr bin Laden?” “You will have to wait and see, but you will read about it in the media.”

No drama there whatsoever.

But the show was such an opportunity! The 20th century had ended with the fall of Soviet communism. What would start off the 21st century? This wasn’t a backyard kick-around, this was a big story. With central Otago standing in for Tora Bora. Fab-u-lous!

I thought about the stolid interview and figured the only thing to do was write my own. While the camera operator is setting up his gear, polite small talk between New Yorker Arnett and mountain-dweller bin Laden flames into a full-on row about the strengths or otherwise of Western culture and the nature of American foreign policy.

Which would be very satisfying to write. I don’t think America has had a decent foreign policy since the Normandy landings, while at the same time I’m with those who reckon the final word on Islam is its total inability to produce anything like the Marx Brothers or Cole Porter.

So I did the job.

For a bit of local colour and light relief, I had Arnett leaning upon my own dire attempts in the past to get a drink in Muslim states.

Somewhere in Syria I was chased from a convenience store by an owner irate at my desperate entreaties for a bottle of red.

In Tunisia I was shown to a doubtful curtained-off back-room in a supermarket. It was like those areas where X-rated videos used to be kept at Video-Ezy stores.

In Denizli, a diesel town in Turkey, I ended up in a low, evil basement dwelling, below street level,  the refuge of fallen Muslims downing liquor, the very image of that Chestnut Tree Café dispensing gin in Nineteen Eighty-Four: “Under the spreading chestnut tree / I sold you and you sold me…”

I don’t think these even made it off the script to the editing floor.

But the row between Arnett and bin Laden remains intact. I’ve viewed it once. It’s compelling.

Dean Parker is an Auckland writer