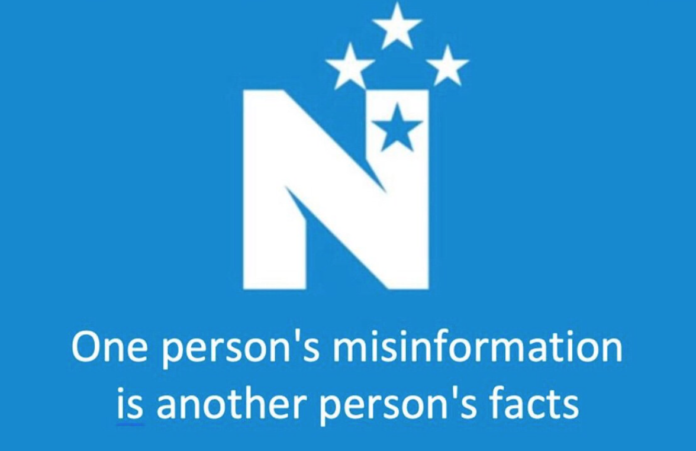 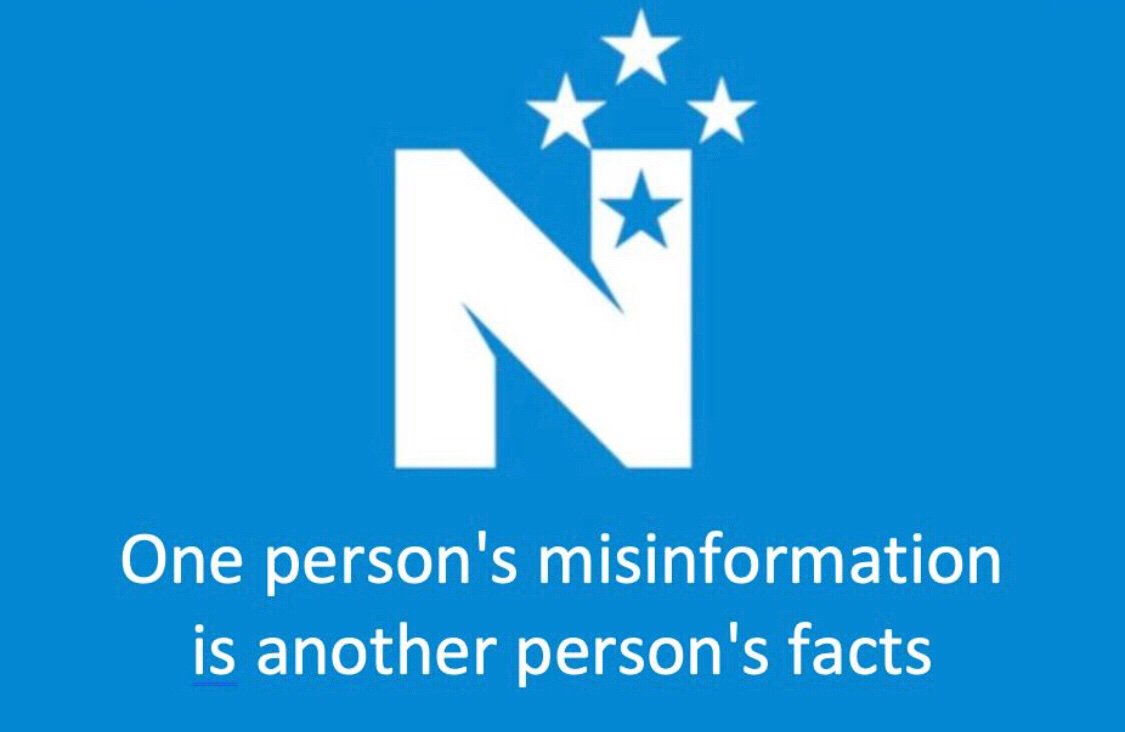 Former Police, Corrections, and Justice Minister in the previous John Key government, Judith Collins, has been ridiculed on social media after posting a comment on Twitter that was patently untrue;

Wrong!! National did not remove Prisoners’ ability to vote. Parliament voted through a Private Member’s Bill not a Govt Bill. Note where NZF voted. Restoring prisoners’ right to vote still not a priority – Andrew Little | Newshub 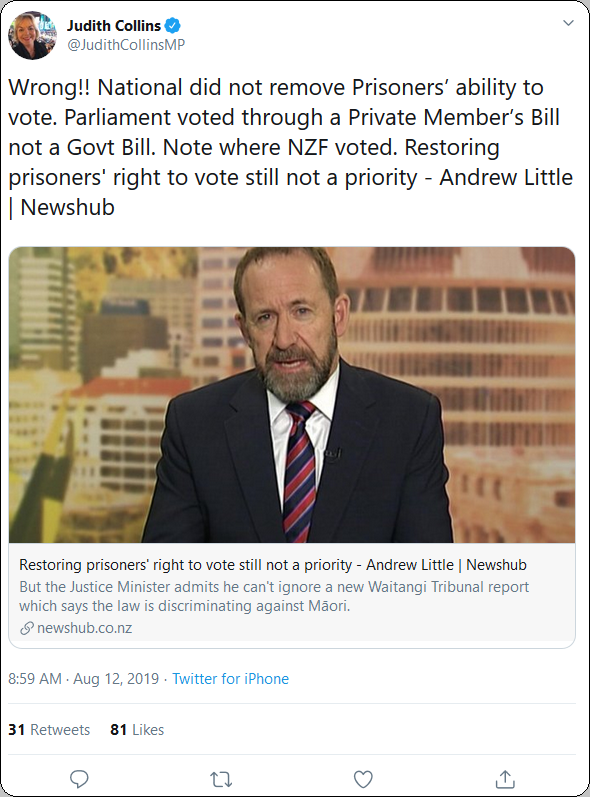 Ms Collins stated-as-fact “National did not remove Prisoners’ ability to vote. Parliament voted through a Private Member’s Bill not a Govt Bill. Note where NZF voted“.

Twitter posters were quick to point out that the Electoral (Disqualification of Sentenced Prisoners) Amendment Act 2010 was indeed a National government Bill. The Bill was introduced by then-National MP, Paul Quinn, on 10 February 2010. 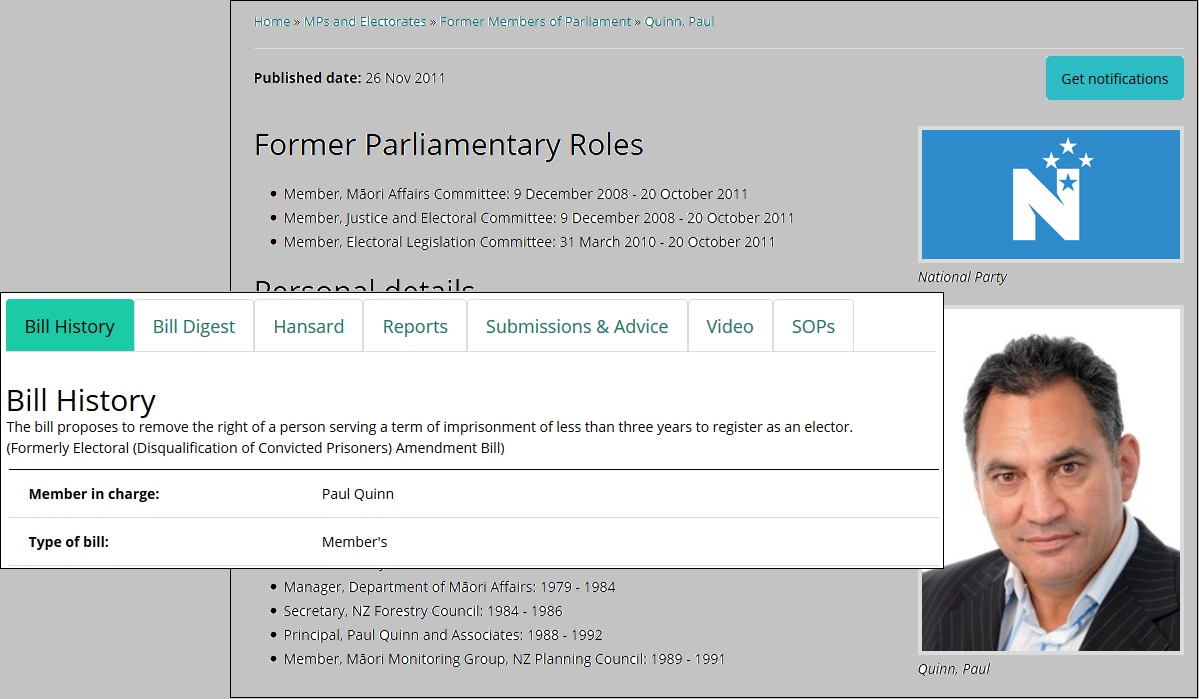 Labour, the Greens, the Māori Party, Jim Anderton (as the Progressive Party), and Peter Dunne (as the United Future)  voted against the Bill. Contrary to Ms Collins advising people to “note where NZF voted” – New Zealand First was not even present in Parliament at the time.

Ms Collins was wrong in almost every respect in her August 12, 2019  Twitter post: the law was National’s from beginning to end.

Her blunder (or wilful misrepresentation) was compounded when her Leader, Simon Bridges, publicly confirmed Ms Collins’ “tweet” as mis-information; 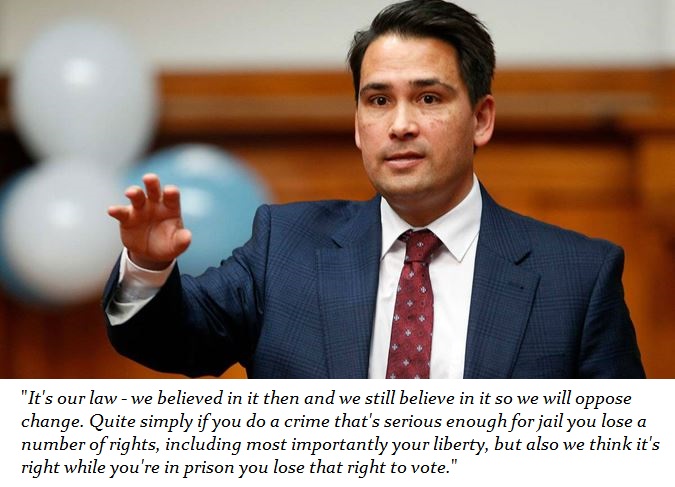 “It’s our law – we believed in it then and we still believe in it so we will oppose change. Quite simply if you do a crime that’s serious enough for jail you lose a number of rights, including most importantly your liberty, but also we think it’s right while you’re in prison you lose that right to vote.”

Simon Bridges’ statement owning the 2010 law change made Judith Collins look like a complete fool. She was lucky that her Twitter post did not gain wider media and public traction. (Those two really need to talk more often.)

This is not the first time Ms Collins has publicly mis-represented an issue. In August last year, Ms Collins used social media to promote a bogus ‘story’ from a fake news site;

The mainstream media coverage was brutal in condemnation; 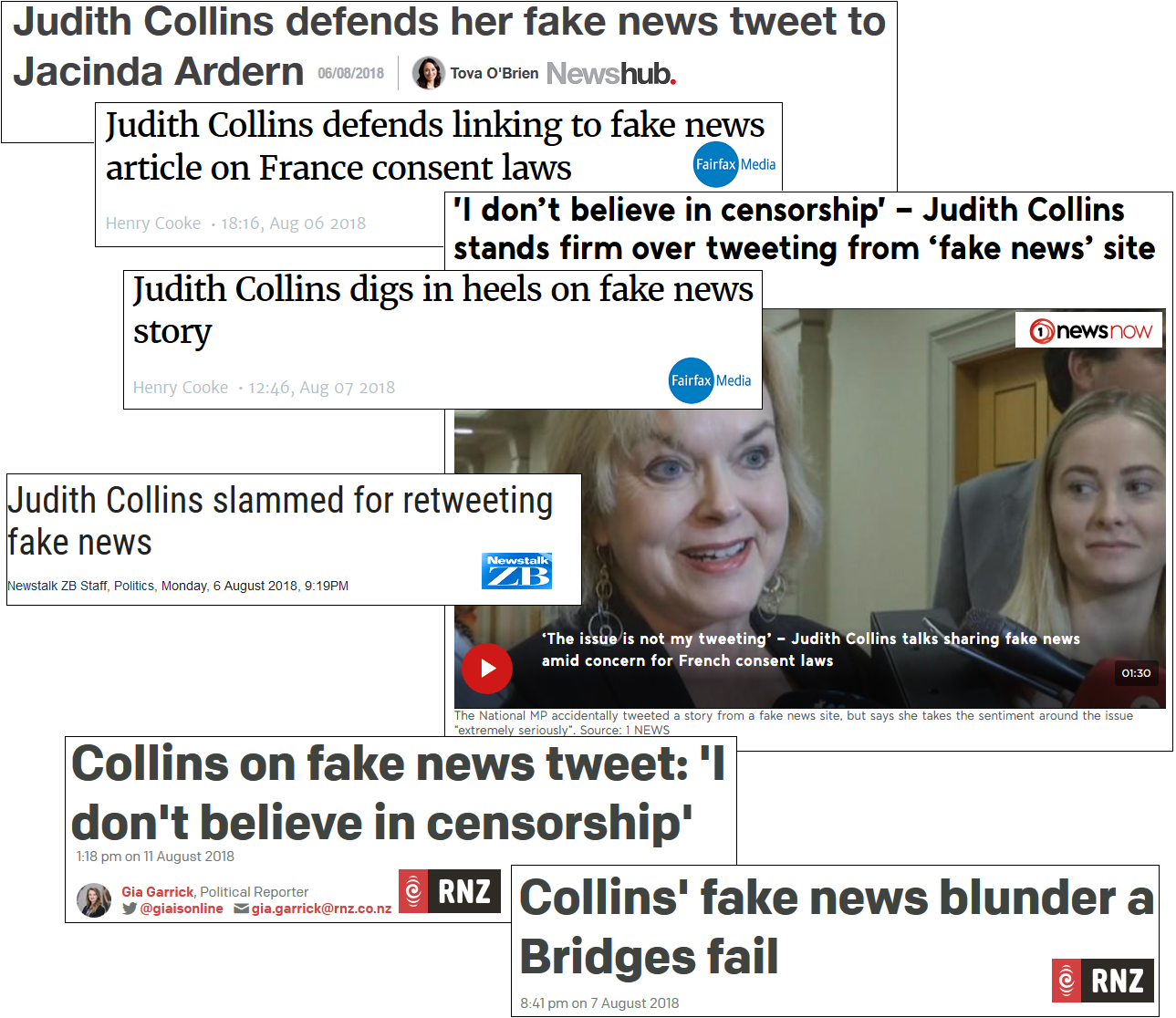 Ms Collins was unrepentant, resorting to verbal gymnastics to defend her ‘right’ to spread lies;

“I still share them because, actually, I don’t believe in censorship on people’s ideas.”

National’s current Leader, Simon Bridges, made no attempt to reprimand his MP, saying;

“I’ve liked things before, actually genuinely accidentally. I think when you’re scrolling through things, you know that’s created its own little controversy. I think in this case Judith Collins feels strongly about the issue, that’s legitimate. But it is a wrong source, she acknowledges that, and we should in general try and get them right.”

The reason that Mr Bridges failed to tell Ms Collins to remove her fake news post was simple and had little to do with fearing a challenge from his errant MP.

Ms Collins, along with every other National MP and Party apparatchik are presently engaged in a Trumpesque campaign to win next year’s election. Whether this involves half-truths or shonky data, or outright spread of lies – National will do whatever it takes to win.

“And so it begins, the National Party’s simultaneous descent and ascent. Downwards, into the dark territory of “whatever it takes”. Upwards, into the glare of electoral victory. It’s happening because the party’s present leader has convinced himself that it is only the first movement which makes possible the second.

That is no small matter. Once truth and propaganda become fused in the minds of one’s followers, debate and discussion become redundant. If one’s opponents are all outrageous liars, then engaging with them in any way is pointless. Rather than waste its time, a political party should, instead, target all its messages at those who have yet to grasp the full mendacity of the other side. Tell these “persuadables” the truth – your truth – before the other parties tell them theirs.”

Whether Ms Collins knew that her comments regarding the Electoral (Disqualification of Sentenced Prisoners) Amendment Act 2010 was true or not is utterly irrelevant.

National has entered into a propaganda blitz. They will use half-truths, exaggeration, out-of-context material, distortions, and outright fabrications to win next years’ election.

They will use dog-whistles; throw ‘red-meat’ to bigots; demonise every group that their conservative base despises.

Thus is the style of election campaign strategy set from now till Election Day: Whatever it takes.

With an under-resourced mainstream media, it will be a Herculean task for journalists to keep track of National Party propaganda. It may take a day to fact-check assertions from National MPs – and by then, party apparatchiks will have moved on to the next part of their diabolical strategy. (Though on 29 July, on Radio NZ’s “Morning Report“ Gyles Beckford challenged National leader Simon Bridges with dogged determination we rarely hear these days. )

Fortunately, they will still fail. New Zealanders, for the most part, don’t take kindly to Trumpian-style politics. And Simon Bridges is certainly no flamboyant Trump.

The only certainty is that Simon Bridges will not be leading the National Party in 2021. 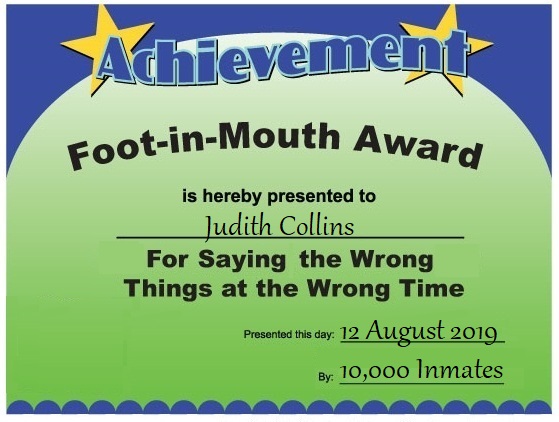 The Daily Blog: Chris Trotter – Simon Bridges Leads National Down Into The Dark

The Green Blog: Prisoner voting disqualification and the Bill of Rights Act

The Standard: Is Judith Collins willing to denounce the use of fake news?

The Standard: Of course Judith should #DeleteTheTweet 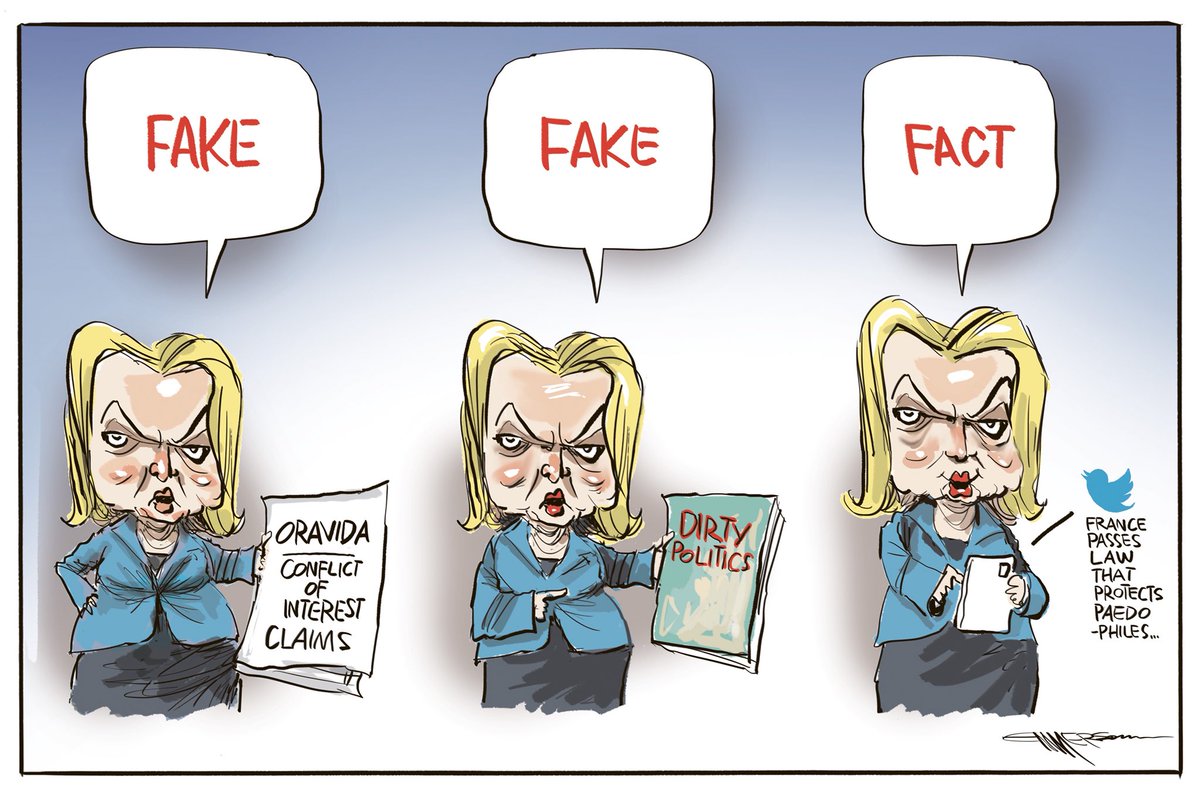