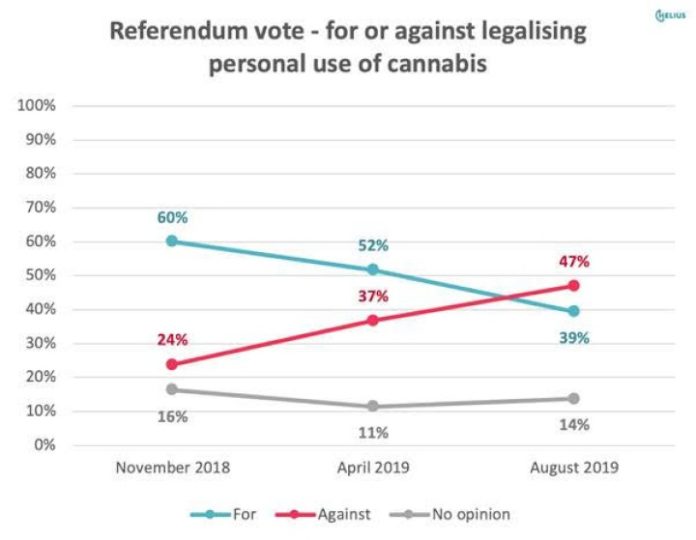 The prospect of ending wider cannabis prohibition looks increasingly unlikely. Over the last nine months, the percentage of New Zealanders who would vote for legalising the personal use of cannabis has declined at a near linear rate of around 10% per quarter. Support is now well below a majority, at 39%.

That’s according to New Zealand’s most significant series of independent surveys, tracking nationwide opinion on cannabis law reform, ahead of the Government’s 2020 binding referendum on whether the personal use of cannabis should be legalised.

“On the current trajectory, the referendum is heading for certain defeat. The numbers all point to the non-medical use of cannabis remaining in a gang-controlled black market. Unless there’s a public information campaign to help Kiwis make a more informed choice around the pros and cons of legalisation, organised crime is set to be the only referendum winner,” says Paul Manning, Executive Director of Helius Therapeutics

The latest survey of over 1,000 New Zealanders conducted at the start of this month, shows support has fallen from a clear majority, at 60% in November, to 52% in April, to just 39% now.

At the same time, 47% of adult New Zealanders are against legalising the personal use of cannabis – up 10% from April (37%) and nearly double the number in November (24%). Those with no opinion sit at 14%, which has remained relatively steady.

Mr Manning is not surprised much of middle New Zealand is turning against the prospect of legalisation, saying key messages from cannabis proponents are not getting through.

“A vacuum of information in recent months has been filled by fear. This is the first set of comparable independent surveys, conducted by the same research company, and the downward trend is staggering. Those pushing for liberalisation will be particularly alarmed to see the substantial drop off in support, particularly from Green Party voters and younger Kiwis,” he says.

At the same time National Party supporters against legalising cannabis for personal use have risen from less than half to nearly two-thirds. In November 48% of National voters were against, rising to 60% in April, and 64% now.

For all age groups under 65, support has fallen. In fact, for younger and middle-aged New Zealanders, support has dropped off quite significantly since April.

Support remains relatively split between men and women, with 39% of men now in favour and 40% of women, albeit a higher proportion of females were in favour in April at 55% compared to 48% of males then.

Mr Manning says that without a co-ordinated, nationwide campaign to deliver balanced messaging around personal cannabis use, efforts for wider reform have been impeded.

“Proper funding for an advocacy campaign is difficult because no individual, business or organisation really knows what the commercial sector would look like in New Zealand.”

He says wherever Kiwis sit on the personal use of cannabis, there’s merit in regulation that should be considered, and that case needs to be put forward sooner rather than later.

“Rather than waiting until next year to tell Kiwis how cannabis reform could benefit New Zealand, the time for more balanced education is now.”

“Legalisation isn’t just about recreational products. It could, for example, enable the creation of a wider variety of over-the-counter cannabis-based wellness products. These could include non-prescription health supplements and cosmetics.”

In a broader sense, he says, although full legalisation may present some challenges, it would generate significant tax revenue, create employment opportunities, and control quality standards. Legalisation would also mean over 320,000 New Zealanders were no longer committing a crime every day, purchasing products in a market controlled by gangs.

Commissioned by Helius Therapeutics and carried out independently by Horizon Research, the results are from of a series of nationwide online surveys of adults representing the 18+ population, accurate at the last census. The most recent survey of 1,003 respondents was conducted on 3 to 4 August 2019. Respondents were members of a third-party nationwide research panel. Results are weighted by age, gender and party voted for at the 2017 general election. At a 95% confidence level, the maximum margin of error is ±3.1%.

At this time, do you think you will vote for or against legalising cannabis for personal use in New Zealand?
All respondents:
• 39% for
• 47% against
• 14% have no opinion