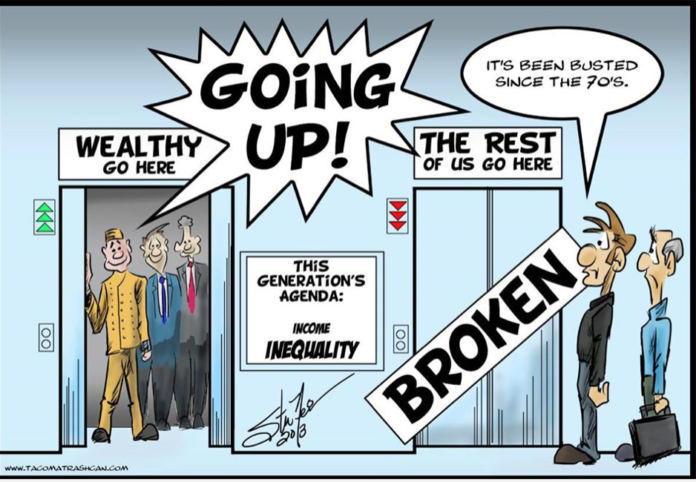 We may live at the bottom of the world but the vast Pacific Ocean no longer insulates us from what happens in other countries far to our North East and West.

Incredible developments in technology, especially in the late 20th Century and the first 19 years of our current century have shrunk our planet so that Wall Street is now just around the virtual corner from Queen Street and decisions made in capitals such as Washington and London impact on our daily lives as rapidly as those made in Wellington.

Right now in America and the UK we are witnessing the purveyors of the politics of selfishness (my name for neoliberalism) using the tactic of division to maintain their grip on power so that the few can continue to garner great wealth at the expense of the many.

Donald Trump and Boris Johnstone are two of kind. Rather than compromise they are prepared to tear their countries apart. It’s not a story that will end well because history tells us that putting your own party before the wellbeing of your country and your fellow citizens is a formula for revolution.

Trump’s trade war with China and Johnstone’s willingness to forge ahead with a no deal Brexit, are matters which will impact on our trade and our economy.

While our government will ,I am sure, want to put a positive spin on these events by pointing out ,for example, that a post- Brexit Britain will want to do a new trade deal with us, the fact is that if both the USA and the UK continue in their current economic and foreign policy directions then there is going to be a major recession in those two countries . Given the significant domestic money worries both of those nations will experience you can expect both of them to cut back on imports- and that’s going to affect us.

Why ? Because it has concerns about global trade and is therefore forecasting tougher economic times for us ahead.

The idea of lowering rates is that it will encourage people to spend more – on the principle that one person’s spending is another person’s income. If we all cut back on our spending then our whole economy will slow down.

The trouble is that neoliberal economics has turned us into a low wage gig economy where many of us have to have more than one job and still struggle to make ends meet, and so we simply have no money for extra spending no matter how much you tempt us.

It’s time Finance Minister Grant Robertson tore up the “fiscal responsibility “ agreement he has with James Shaw of the Greens because that document commits him to austerity economics and perpetuation of the status quo on untaxed wealth creation.

That’s why I call it a “ social irresponsibility” agreement . It perpetuates the neoliberal economics and politics of selfishness and increases the gap between the haves and have nots. So, again, it’s divisive .

As I say, this is a story that will not end well.