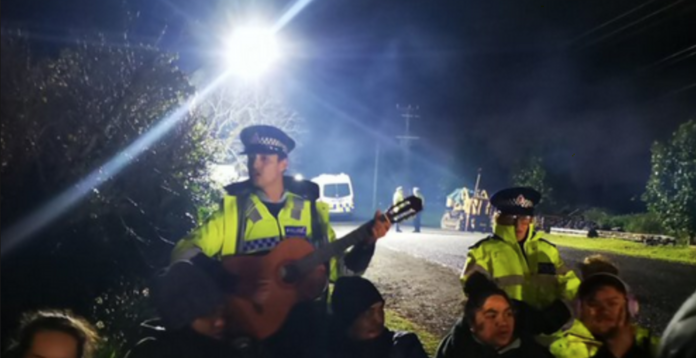 Watching the course of developments around Ihumatao over the past few months, it is hard to escape the sensation that something extraordinary has happened. What would, some decades ago, perhaps have been written off as a “Maori” issue by much of New Zealand – and consequentially, disparaged, denied, and turned into a pit of talkback-radio excoriation – has in fact managed to attain broad support from across the community.

The fact that John Roughan was prepared to pen a piece in the Herald a few days ago speaking about his own evolving perspective upon the situation – and attempting to cast it as a more justified cause to support than Bastion Point – would seem to confirm that there’s been some critical shift out there in the tumulous [not to mention tumescent] body politik. John Key’s literal biographer, and a man who not a month beforehand was speaking wistfully about the rulership of Auckland by “Remuera Patricians”, being on-side for Ihumatao being protected is a most interesting barometer, indeed.

But if the necessity of the protection of Ihumatao has now managed to draw in support from ‘unexpected’ quarters like Roughan and his ilk, it has also succeeded in conjuring self-appointed championship from much less surprising specimines. And, I would argue, not necessarily to the Cause’s overarching favour.

The video which has been doing the rounds, of a protester at Ihumatao verbally castigating a police officer and demanding that he decamp from his lawful duty to the state “back to your own country”, is merely the tip of the iceberg. At the risk of regurgitating NZ Police press statements upon the subject, it really does seem like the Police deployed on that watch-line have displayed stoic professionalism in the face of being spat at, insulted, taunted, and – especially in the case of Maori police officers on site, as well as others – racially abused.

Once upon a time, particularly some four decades or more ago at the height of the 1980s’ epoch of ‘robust encounters’ between Police and Protesters, the happenings and their outcomes would no doubt have been severely different. And it is not at all to seek to excuse the Police from some of their previous (or, indeed, present) areas of misconduct, to say that the restraint they have exercised in recent times at Ihumatao as well as elsewhere has been to their credit. [Indeed, due to the significant quotient of new cops about the place these days, it’s absolutely no exception to state that much of what’s egregious even in the relatively recent record of the NZ Police, may have occurred well beyond they joined the force, were anywhere near it, or in some cases, had even actually been born.]

Yet in every war, there is an inveterate temptation when going into it to attempt to simply re-fight the last one rather than engaging with the actual fact-situation that unfurls con-current, infront of one.

This perhaps explains why some either at or around Ihumatao are seemingly focused upon re-litigating any number of previous skirmishes or outright conflagrations with the Police in particular, the Crown in general, or even overseas instances over which the Government of New Zealand has little, if any, connection let alone control.

And you know what? Leaving aside the ‘optics’ of the situation, that’s not entirely un-understandable. When you feel that you are bearing the weight of decades, centuries worth of marginalization, oppression, and the exact, axiomatic opposite of fair treatment by colonial authorities or post-colonial or settler states, there is not just a temptation to view everything through a kind of overarching-writ-large metanarrative of ‘us versus them’ taking place upon every corner of our nation’s history, and thence from there through much of the globe. There is an actual factual basis to it, as applies the fact that it’s often the debris of globe-spanning empires and significant coterminities of experience [and, for that matter, sodality, solidarity] that we are dealing with here.

But at the same time, it does need to be said that those who would hijack this particular cause in pursuit of a far broader agenda (especially that which can be basically summed up as F*#& the Police), run the significant risk of harming the otherwise enviably positive rapport which the Ihumatao preservation motive has built up within the wider NZ public.

It becomes a distraction; it becomes a degradation; it becomes even a vector – as we can see here with that video – of perpetuating *further* iniquities against those not exactly morally blameful for the actually-objectionable circumstances being protested against. Such as the verbal attack against that nondescriptively brown police officer on Monday night, who may have been born here or elsewhere – or may even have been of Maori descent himself. Who knows. I doubt anybody thought to check before shooting mouth off and into foot with reckless abandon.

In any case, my point is a simple one.

The Government is yet to remove digit and do something productive over the whole issue; and perhaps there are solutions which do *not* require the Prime Minister personally wading in, or remarks to that effect eventuating.

But, not just because the matter is ‘in train’ and public opinion appears to be swinging over to the pro-Ihumatao side .. but also because it’s the morally correct thing to do – it is *certainly* possible to keep pushing for the protection of the site in question *without* attempting to turn the whole thing into an anti-police conflagration.

Let us hope that cooler heads on the protest side prevail.