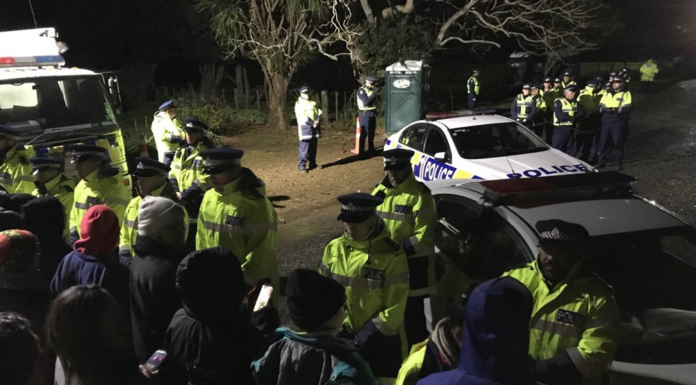 There were frantic phone calls occurring late last night as Government Ministers were suddenly asked, ‘what the hell is happening’ as news quickly spread on social media that the cops had dumped the agreed de-escalation at Ihumātao and were ramping up an attempted forced removal of the protectors.

Police arrived on mass, knocked over leader Pania Newton, kettled the activists, denied blankets and food, started threatening mass arrests and most troubling, were implementing phone blockers to stop the activists telling the rest of NZ what the hell was going on.

It was only after late night social media stepped up and protesters begun flooding to the site that the Police realised they were rapidly losing control of the situation. Police claimed they had suddenly ratcheted this up out of a desire to protect order and safety but it was their fucking presence that was creating the disorder and danger!

This joke statement by Cops had all the delusion of China declaring that they must violently send the Peoples Army into Hong Kong to preserve harmony and prosperity.

There were frantic phone calls from the Labour Party to the Police last night demanding an explanation and despite Jacinda’s clear direction that there was to be no escalation and no building while dialogue between impacted parties occurred, the Police very formally informed those queries that THEY make operational decisions and effectively told everyone asking questions about what they were doing to  ‘RESPECT MY AUTHORITY’.

I understand the stunned silence by that response lasted a few seconds before the fucking riot act was read to the Police and made clear to them that such direct refusal to accept the agreed parameters of this dispute amounted to insubordination of the highest level and that if it turns out that there was some political influence to go beyond the agreed de-escalation all hell was going to erupt and careers ended very suddenly.

Political interference like Shane Jones extraordinary statements on Q+A recorded hours earlier but played as the Police attempted to move in. Jones attacked the protestors and attacked their rights to be at Ihumātao and one really has to question if the Police had been privately promised political cover if they attempted to forcibly remove occupiers.

This morning there is still confusion as to how the hell the Police managed to misread the very clear directions Jacinda had given to NOT escalate this.

Simon Lusk is rumoured to be advising NZ First and this reeks of his septic strategy.

Winston Peters had better put a leash on Shane Jones.