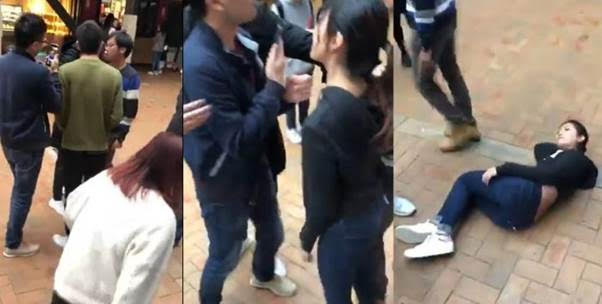 THE VIOLENT REACTION by mainland Chinese university students to on-campus expressions of solidarity with Hong Kong’s democratic activists is perplexing. The general presumption is that, both here in New Zealand and across the Tasman, these violent pro-Beijing counter-demonstrators are backed by the Chinese authorities. If this is true, and the published correspondence between the Chinese Consul and the Vice-Chancellor of AUT over a proposed, but subsequently cancelled, Tiananmen Square exhibition only encourages people to believe that it is, then the Chinese Government is behaving very foolishly.

Nothing is more calculated to stir-up anti-Chinese feeling than images of young Chinese males, guests of the New Zealand state, thuggishly assaulting a young female citizen exercising her right to free speech on the Auckland campus. The New Zealand Ministry of Foreign Affairs and Trade (MFAT) and its front-organisation, the Asia Foundation, may be tireless pourers-of-oil over troubled diplomatic waters behind the scenes, but they cannot afford to be seen publicly down-playing such a blatant violation of New Zealand’s political norms.

The same applies to the Vice-Chancellors of New Zealand’s universities. No matter how furious the University authorities may be with the pro-Hong Kong activists (for endangering the tertiary education sector’s business model) the behaviour of their pro-Beijing antagonists has forced them to publicly reiterate the universities’ statutory obligation to act as the “conscience and critic” of New Zealand society. Any further outbursts from pro-Beijing Chinese students will only increase the pressure on the nation’s vice-chancellors. Calls are already being made for the expulsion of the individual/s responsible for the assault on the young Auckland student. These will become irresistible if such attacks are repeated.

It is this obvious diplomatic downside which argues against these pro-Beijing demonstrations being officially sanctioned. The Chinese Embassy and its Auckland Consulate prefer to exert pressure quietly, and well out of the public gaze. If a New Zealand politician speaks out openly against Chinese policy – in regard to the South China Sea, for example – then an official rebuke will be forthcoming. It is, however, most unusual for the Chinese to court public condemnation deliberately.

That is why it makes more sense to cast about for an alternative explanation.

The most obvious would have to be the exaggerated patriotic sensitivities of students from the Peoples Republic. The ability to study abroad, especially in English-speaking countries like Australia and New Zealand, is a privilege to which only the sons and daughters of the most influential mainland Chinese families can aspire. Conscious of their privilege: an uncomfortable awareness in a society still officially committed to socialist principles; these young men and women undoubtedly feel a heightened obligation to defend the honour and dignity of their homeland from all manner of insults and injuries.

Add to this awareness a lifetime’s worth of education about the imperialist perfidy of the Western Powers – Great Britain in particular – and the Hong Kong protests can only present themselves to the ultra-patriotic eyes young Chinese abroad as the work of treacherous reactionaries. The mainlanders are fearful that the ultimate goal of the protesters is to nullify the 1997 Handover Agreement, by which the United Kingdom accepted the inevitability of Hong Kong’s eventual reabsorption into the Chinese motherland. Like the Beijing Government, itself, Chinese students studying abroad are incensed by the idea that the Hong Kong protesters are intentionally raising the possibility of the Special Administrative Region breaking away to become another Taiwan.

The violent reaction of pro-Beijing Chinese students to the merest suggestion of an “independent” Hong Kong thus requires no official orchestration. The sons and daughters of high-ranking Communist Party officials know exactly what is required of them – as do their less exalted student compatriots. These latter are also acutely aware that as soon as they have completed their studies they must return to their homeland. Their prospects of a successful career will not be enhanced by secret reports detailing their sympathy for pro-democracy protests in Hong Kong. Such is the overwhelming power of the Chinese state, past as well as present, that the chill of its shadow is almost always as persuasive as the weight of its fist.

If anything, then, it will have become the urgent priority of the Auckland Consulate and the Wellington Embassy to restrain the enthusiasm of the Peoples Republic’s patriotic youth overseas. Beijing has enough on its plate at the moment: the Uighur Muslims in Xinjiang Province; American accusations of 5G espionage; maintaining the momentum of One Belt, One Road; without the best and brightest of its defenders on Australian and New Zealand campuses behaving like triad thugs.