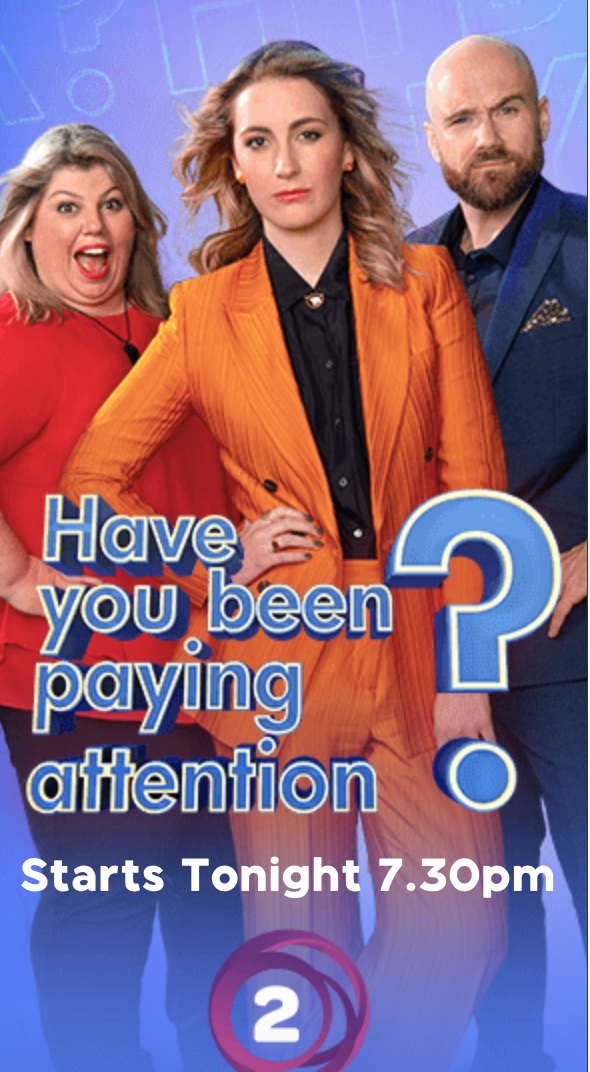 Another sad and shallow hack at current affairs as entertainment has brain-farted onto our screens last night with TV2s awful ‘Have you been paying attention‘.

Just like ‘The Project‘ on TV3, ‘Have you been paying attention‘ is a watered down and vastly more dumber version of a clever Australian show. Wouldn’t it be nice for once to have the confidence to do something local that is smart and subversive rather than an Australian knock off?

Unfortunately this is TVNZ, the network who infamously turned down the Flight if the Conchords because they didn’t ‘get it’.

To be honest I didn’t have much hope for the show when I saw the adverts.

Maybe it’s the orange suit pants of the host (she’s off the Edge Radio station isn’t she?), maybe it’s the bland comedic commercial radio talents of the guy (he’s off ZM isn’t he?) or maybe it’s Urzila Carlson’s South African accent which has all the charm of feral possums on meth making love on top of a tin roof with an orchestra of finger nails on blackboards, I couldn’t pin point where my depressed foresight originated, but the combination of all three on the night seemed to be even more soul destroying than I had initially considered possible.

The other contestants sadly all managed to drown as well. One trick pony Tom Sainsbury didn’t have his Paula Bennett trick, some other women off a commercial radio station??? (I’m guessing she’s off a radio station, I don’t know and didn’t care enough to even bother doing a google search) and some stand up comedian who needed the money all desperately tried to make this commercial half hour less painful, but couldn’t manage to deliver.

The hack pre-produced jokes fell flat, the laughter was fake and the entertainment value non-existent.

Look, I get that as someone with an education over 16 with basic reading skills, I am not the target audience for this slop, but TVNZ managed to fill a room with a cheering audience who all looked like they had drunk their body weight in Red Bull, so maybe lowest common denominator lite entertainment is the glorious new future of public television?

All I know is that I ended up feeling more stupid than when I started, so the same experience when you listen to ZM and The Edge both at once.

One good outcome from Have you been paying attention was that it justified my Sky TV subscription this month.