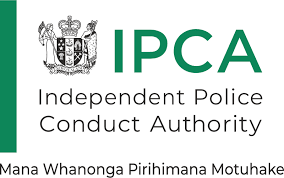 The Independent Police Conduct Authority has found that two officers used excessive force during an arrest in Ramarama, South Auckland on 26 October 2016.

Police received a 111 call from a man, whose Ute had just been stolen from Bombay, South Auckland. Police located the Ute with the assistance of the Police helicopter, Eagle. The man who had stolen the Ute did not stop when Police signalled for him to do so.

Police pursued the Ute through countryside for approximately 15 minutes, during which time the fleeing driver rammed the pursuing Police car.

• Eventually the man surrendered to Police on a private farm. He stopped the Ute and got out with his hands in the air. He then lay face down on the ground with his hands behind his back. Several officers assisted in arresting and handcuffing him.

• During the arrest, an officer deliberately kneed the man twice in the head, causing facial injuries. While the man was lying on the ground handcuffed, a second officer intentionally stepped on his leg.

The Authority found that both officers unlawfully applied force to the man.

Authority Chair, Judge Colin Doherty said: “The officers used intentional and gratuitous force against the man when he was in a vulnerable position, restrained on the ground. Their actions were an abuse of power.”

Police charged the first officer with wounding with reckless disregard. The officer pleaded guilty and was discharged without conviction by a District Court Judge. He resigned from Police following this incident.

The second officer was sanctioned by Police following an employment investigation.

The Authority also raised with the Commissioner of Police a number of shortcomings it identified in the conduct of the Police investigation into this matter.

The release of the Authority’s public report was delayed until the conclusion of related court proceedings in July 2019.

West Papua: Sad plight of the Nduga internally displaced children
Hidden women of history: Australian undercover journalist in hospitals
Textbooks should highlight Marcos dictatorship atrocities, says Robredo
Media academic warns shutting key TV channel would be step to ‘dictatorship’
Ampatuan massacre justice aftermath with more fear of warlords, corruption
We found the world’s oldest asteroid strike in Western Australia. It might have triggered a global thaw
Juries need to be told how they’re allowed to use the internet to ensure fair trials
I’m taking antibiotics – how do I know I’ve been prescribed the right ones?
Scientists hate to say ‘I told you so’. But Australia, you were warned
Bushfire education is too abstract. We need to get children into the real world