Three men who grew up in the same country town find themselves at the heart of a national crisis. One a gang member. One a cop. One an MP.

An incident involving the MP, prostitutes, gangs and ultimately police intervention, sours the former friendship of the schoolmates.

A decade later, poised to deliver testimony of corruption against his former school friend the Minister of Maori Affairs, detective inspector Erwin Olsen is whisked away from a parliamentary enquiry to take charge of a terrorist attack on the Auckland Harbour Bridge – unbeknown at the time to have been committed by the other childhood mate.

Seconded onto Olsen’s squad to deal with the terrorist attack, sergeant Brenda Mathieson embraces the ruthlessness of the detective inspector, exposing a culture within the police of racism, corporate bullying and blatant disregard for the rule of law.

Within the corridors of parliament, political corruption is exposed as a Chinese conglomerate battles pressure to prevent extension of their Silk Road, to NZ.

As the tragedy of young men in gang life unfolds, Brenda, who joined the police in search of vengeance, uncovers a hidden truth.  This throws light on the darkness of the police culture she has embraced and the role she is to play.

Her epiphany takes a quantum leap when she goes to the aid of an officer in line to be the first Maori Commissioner, but suspended on serious allegations.

A nation in crisis hangs in the balance.

‘In Out of the Inferno, Meurant proves there’s only one way to tell the unvarnished truth about the country he loves – write fiction.’                      Christ Trotter: political commentator & editor. 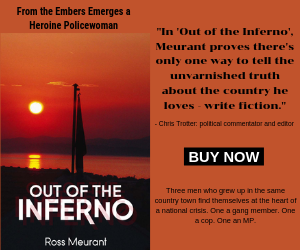