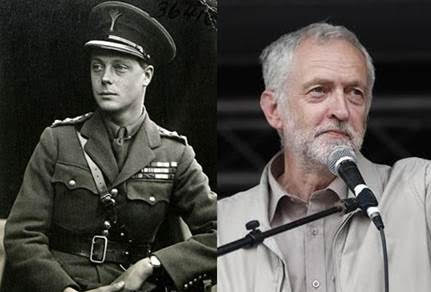 THOSE SHOCKED TO DISCOVER that unnamed British civil servants have briefed The Times on Jeremy Corbyn’ “mental and physical frailty”, shouldn’t be. Corbyn is merely the Leader of the Opposition. In 1936, the British civil service, instructed to spy on their own sovereign, King Edward VIII, did not refuse. The explanation for civil servants’ willingness to intercept the telephone calls of the reigning monarch is the same as for their willingness to brief against the Opposition leader to the Murdoch press. In both cases, the targeted individuals were considered “unfit for office”.

In the period between Edward VIII’s ascension to the British throne on 20 January 1936, and his abdication on 11 December that same year, the Conservative Government of Stanley Baldwin, advised by the civil service mandarins of Whitehall, were gravely concerned that the King’s infatuation with Wallis Simpson, and his determination to over-ride their objections and make her Queen, might lead him throw in his lot with Oswald Mosely and the British Union of Fascists (BUF) – thereby staging what might be described as a “Royal Coup”.

Had King Victor Emmanuel III of Italy not done something very similar in 1922? When confronted with the fascist “March on Rome” did he not, acting without the sanction of the country’s elected government, appoint Benito Mussolini Prime Minister? Making Mrs Simpson Queen-Empress of the British Empire might strike Mosely as a very modest quid-pro-quo for the keys to No. 10 Downing Street.

Baldwin and his fanatically anti-communist Home Secretary, Sir John Simon, were only too aware of Mosely’s radical economic plans for fighting the Great Depression and putting the millions of unemployed back in work. The BUF leader had begun his career as a young and visionary Labour MP, leaving the party only after its hidebound leaders rejected his proto-Keynesian economic programme. Rejected by the Left, Mosely attempted (unsuccessfully) to get what he called “The New Party” off the ground. It was Hitler’s extraordinary success at restoring Germany to full employment that finally led him into the arms of the fascists.

The British Establishment’s deep concerns about the Heir Apparent were manifested in Edward’s father, King George V’s, decision to wiretap the phones at ‘Fort Belvedere’, the Prince of Wales’ private residence. The King and Baldwin were of one mind when it came to Mrs Simpson. Any stepping-back from the Church of England’s position on divorced persons, would signal the end of the moral order which justified the core institutions of the British Empire and underpinned its fearsomely unequal and class-ridden societies.

And, it wasn’t just the Prince of Wales’ “modern” morals the Establishment feared, it was equally concerned about his “modern” politics. Had he not declared, following a royal visit to an impoverished mining community and its abandoned colliery, that “something must be done”? Wasn’t he popular with working-class people for his easy familiarity with all his subjects? Long before Diana, the “People’s Princess”, Edward threatened to become the “People’s Prince”. The Prime Minister’s dismay upon being informed, in the months following Edward’s father’s death, that the new King had asked for, and participated in, a lengthy private discussion with Mosely at the house of a mutual friend, is easily imagined.

Such were the considerations that persuaded Baldwin and Simon, acting through the Cabinet Secretary, Sir Horace Wilson, to contact the General Post Office and order a wiretap to be placed on the King’s telephone conversations.

In the words of the “Most Secret” memo, kept hidden in the Cabinet Office vaults for 80 years, and only made public in 2013:

“The Home Secretary asks me to confirm the information conveyed to you orally, with his authority by, by Sir Horace Wilson that you will arrange for the interception of telephone communications between Fort Belvedere and Buckingham Palace on the one hand and the Continent of Europe on the other.”

There can be little doubt that a more ambitious, and less louche, monarch than Edward VIII, could have caused a lot of trouble had he a mind to do so. That the new King failed to make the slightest use of the powerful political weapons that lay ready to hand in those fraught months between 20 January and 11 December 1936, preferring, in the end, to abdicate in favour of his brother, confirms – albeit in a very different way – the British Establishment’s assessment that he was “unfit for office” and in urgent need of replacement.

That senior members of the British civil service share a similar assessment of Jeremy Corbyn is in no way surprising. Corbyn and his allies are much more determined to change British society than Edward VIII ever was. Small wonder, then, that they are briefing against him to Rupert Murdoch’s most prestigious British newspaper, The Times. Planting the seeds early that, with careful nurturing, they clearly intend to harvest at the exact moment it becomes clear that Corbyn intends to be as good as his socialist word.

“Mr Corbyn is mentally and physically frail”, they will announce (with suitably doleful countenances) “He has, over the past month, been displaying increasing signs of dementia. That is why, with great reluctance, the civil service chiefs have advised Her Majesty that, in their professional opinion, the Prime Minister is unfit for office. The Queen is now considering that advice. Pending her decision, a State of Emergency has been declared and will remain in force for the next 30 days.”