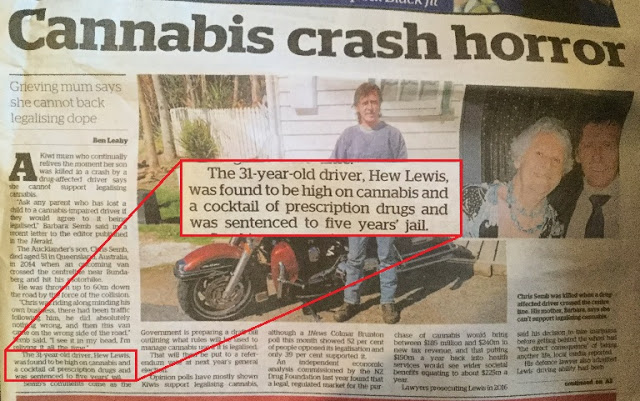 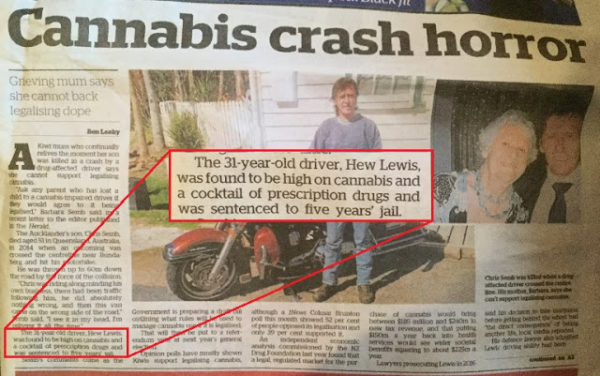 You ever get the feeling that your news media’s attempting to push a particular narrative that’s … not really all that concerned with the truth?

I mean, seriously. Take a look at this story, from the front-page of yesterday’s NZ Herald. Now, going off that headline … and pretty much everything else in the article … you’d be forgiven for thinking that cannabis was the *only* factor [or, indeed *a* substantive, salient factor] in the accident that occurred. Because it’s repeated – over and over and over again, for two pages.

Yet you look a little closer, and there – nestled in a small sentence that would be altogether too easy to just gloss over if you’re reading swiftly – is the actual reality of the situation.

Now, it doesn’t specify just which “prescription drugs” are being talked about. Wouldn’t go very well with the ‘corporate line’! Especially if it turned out the guy was legitimately prescribed them!

But I would hazard a guess – and let me be clear about this, this is my uninformed, speculative opinion – that if they were being recreationally used, they were likely the sort of anti-anxiety or other meds which would stereotypically come with a “DO NOT OPERATE HEAVY MACHINERY WHILST UNDER THE INFLUENCE OF” disclaimer.

Or, in other words, the sort of meds you *really* shouldn’t be driving upon … and which would, odds on, be far more – even *exponentially* more – likely to have *actually* had a salient, significant role in the causation of this regrettable accident.

I’m not even going to get into the actual science around the impact of cannabis upon driving, here; although I *will* note that the addition of multiple drugs to an individual, in simultaneous use, can have ‘quadratic’ rather than mere ‘additional’ effects.

The fact is, that somebody, somewhere, doesn’t want cannabis legalized via referendum.

And in order to deliberately frustrate this particular democratic outcome, they’re going to pull out all the stops in order to do so.

No tragedy is going to be too great, no detail too small, for them to distort out of all proportion. They’ll find the dirt to throw and the mud to sling – whether it exists there or not.

Now, we can tell from various developments over the past few years, that they’ve narrowed in on an ‘attack angle’ around ‘drug driving’.

This has partially been driven by the previous National-led Government presiding over some popularization of the concept via some rather odd televised ads; and various attempts to look into bringing Australian-style roadside testing here.

It’s also a tangential development to the legitimate expression of horror at our ever-high and lamentably lingering road toll. People want it to come down, so in desperation, will look in all manner of directions in order to try and do something about an escalating human tragedy. That’s understandable. And when you’re trying to make sense of a tragedy, it’s only human nature to go for what seem like the ‘easily preventable’ “BUT WHY” factors in its (narrative) causation.

So going off the steadily increasing saliency of these “but why would we want to legalize cannabis, when our road toll is already so high??” talking-points all across talkback, social media, and letters to the editor … it seems pretty clear that whomever, whatever’s directing this agenda, has identified a strategy that works.

This kind of broad-based anti-PR snowjob offensive is rather like playing a game of Battleship. You fire out your volleys, and when you see the plume of smoke from having scored a hit on something …. you zero in and bombard that particular point with everything you’ve got, in the hopes of taking the whole thing down once having hit the magazine via repeated fusillades.

The National Party, as well, has chosen to capitalize directly upon this avenue of attack – bringing in several strikes at the present Government (including the Speaker of the House) as allegedly being “soft on drugs”; inviting victims and family of victims of crashes caused by, inter alia, *synthetic cannabinoids* [and let’s remember – the comparison between consuming cannabis and consuming synthetic cannabinoids … is perhaps akin to that between drinking alcohol, and drinking methylated spirits, while on meth] to come along to Parliament to add to the human pathos of the whole thing; introducing a private member’s bill; and both getting themselves kicked out of the Debating Chamber and riddling the Minister for Police with questions upon the apparently epidemic crisis of “drug driving” here in New Zealand.

The goal of such things is quite clear, and – as always – at least as two-fold as it is reprehensibly two-faced. First and foremost, to make the Government of the day look bad, duplicitous, morally and otherwise. Like it’s too limp-wristed to care about ordinary Kiwis’ voices and vehicular safety.

And second, to keep trying to drive public opinion *away* from what’s previously been pretty full-throated support for cannabis law reform, in any meaningful variety. [Which also helps to hammer the government – because apparently, giving ordinary New Zealanders their fair say on cannabis legalization makes everybody even tangentially proximate to the Cabinet of the day a raging pot-head]

You keep saying something often enough, repeatedly enough, and with sufficient permutations upon the same basic theme … people start to believe it’s this absolutely huge, overweening issue that’s at crisis-epidemic-insurgency levels. And therefore, that Something, anything, Must Be Done to stop it. Somehow.

So over the next twelve to fourteen months, expect more of these stories, once again blown out of *any* semblance of reality, to be broadcast and shouted from the rooftops in superliminal propagandtastic efforts, with increasing frequency, right up until Polling Day for our cannabis legalization referendum.

Because the only “mind altering substances” THEY want you to have access to – are alcohol, newspapers, and National Party electoral leaflet material. Perhaps that’s in ascending order of social destructiveness.