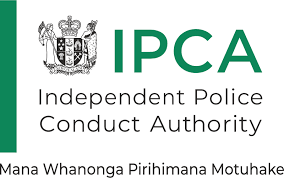 The Independent Police Conduct Authority has found that an off-duty officer unnecessarily involved himself in a dispute between his friend, Mr V, and the friend’s former partner, Ms S, in Christchurch in November 2015. When the dispute escalated, the officer used excessive force against Ms S.

This incident occurred after Ms S broke into Mr V’s apartment and took two dogs whose ownership had been disputed. Ms S texted Mr V and told him what she had done.

Mr V was socialising with his friends, including Officer A, when he received the text. Officer A drove Mr V around Christchurch, visiting various addresses to find the dogs. When the dogs were found, there was a confrontation between Mr V, Ms S, Ms S’s ex-husband, and Officer A. The Authority found that during this confrontation Officer A used excessive force against Ms S by grabbing her by the hair and pushing her to the ground.

Following a criminal investigation, Police found there was insufficient evidence to prosecute any person involved in the confrontation.

The Authority found there were deficiencies in this investigation and that there were potential lines of enquiry that Police should have followed up.

However, the Authority is satisfied that the subsequent Code of Conduct investigation into Officer A’s actions on the night was carried out thoroughly and impartially, and notes that he received a disciplinary outcome.

“Officer A’s actions showed poor judgement. He should have waited for on-duty officers to arrive rather than involving himself in a physical confrontation. Once he became involved in that confrontation, he used excessive and unjustified force against Ms S.”

Excessive use of force by off-duty officer in Christchurch(PDF 477 KB)
[Scoop copy:18_JUNE_2019_IPCA_PUBLIC_REPORT__Excessive_use_of_force_by_offduty_officer_in_Christchurch.