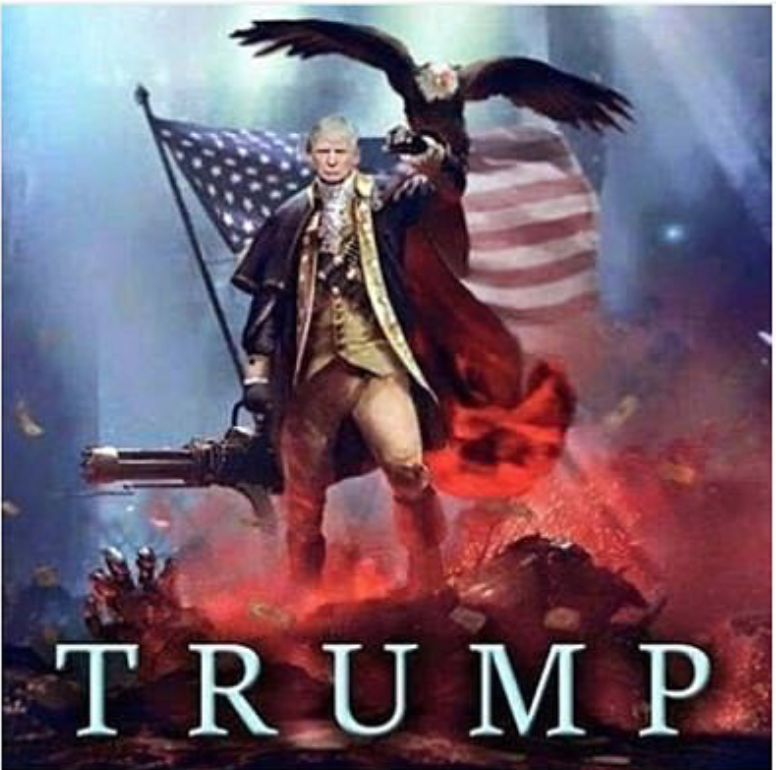 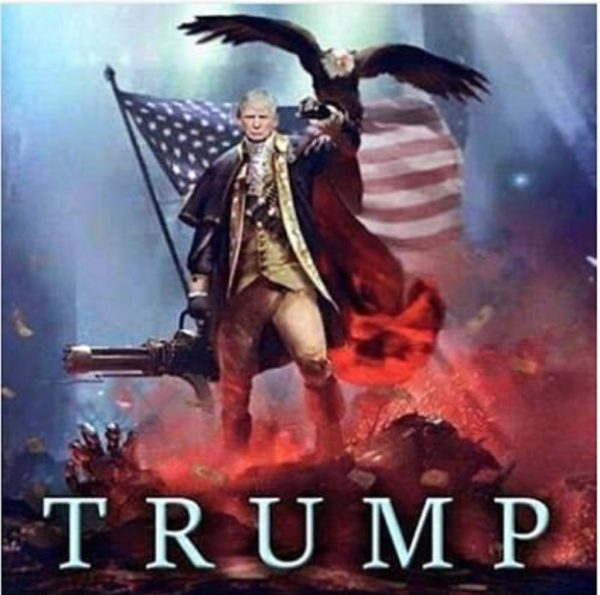 To date, Trump’s nationalism has had an isolationist feel about it when it comes to his foreign affairs agenda. 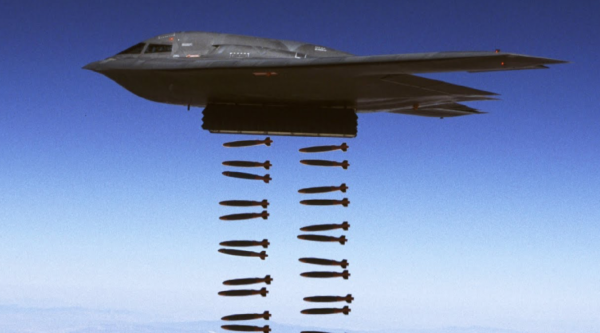 …Trump sees a waste of money… 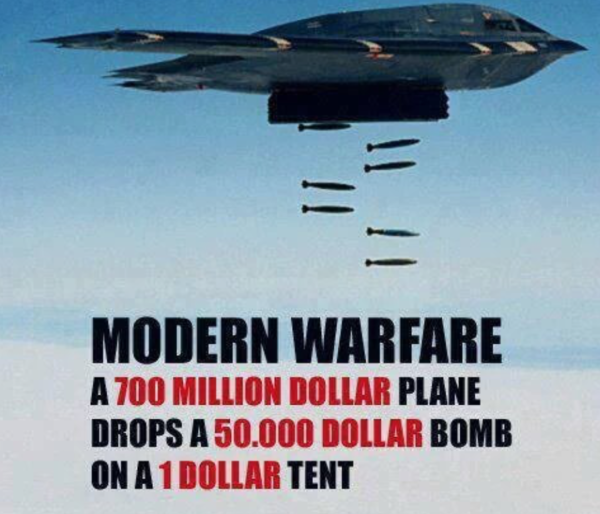 …the alt-Right universe Trump inhabits believes the Deep State is the real enemy of the people and while Trump yearns for the tough man military aesthetic, his paranoia of the Military Industrial Complex is as righteous as Dwight Eisenhower’s was.

Like with everything else for Trump, the Military are there to make him look good, he doesn’t trust anything that doesn’t satisfy his immediate need to lash out. There have been stories told by insiders that Trump has demanded immediate military action against those he is angry with, only to later forget he asked.

I’m someone who no longer sees Trump as anything more than a gut instinct dog that chases every car and who has a feral rat cunning mixed with a toxic narcissism. His improbable rise and dominance of politics is because he understands resentment as a political tool better than any other living politician on the planet. Unfortunately this makes him far more dangerous, not because he is a Machiavellian mastermind, but because he is an ignorant bully who is far weaker than he knows.

He has weaponised envy  for those Americans who feel culturally alienated by the sneers and smug assuredness of Gen Y cosmopolitanism and Gen X cynicism. Those Americans whose economic pain has been the cost of globalised liberalism and whose misplaced cultural angst is at having to share space with voices, genders and ethnic identities that make them feel like the outsider.

Trump is the unprivileged who were accused of privilege striking back with naked blind fury the way an angry drunk explodes with wanton addiction.

Trump is the feral yawning chasm of loneliness and isolation that gnaws away at the consumer culture American psyche.

Trump’s gut is to push the rest of the world away and hide behind his wall,  no top brass military leader would want to embark upon conflict with such an irrational leader as Commander in Chief. The possibility of miscalculated escalation is simply too high to risk prolonged engagement, but those who won’t be tasked with carrying out military action see Trump as the perfect patsy to push their own pet hates and grudges through as foreign policy regardless of the price.

There are 3 gambits being played out externally that could all implode by accident or design. 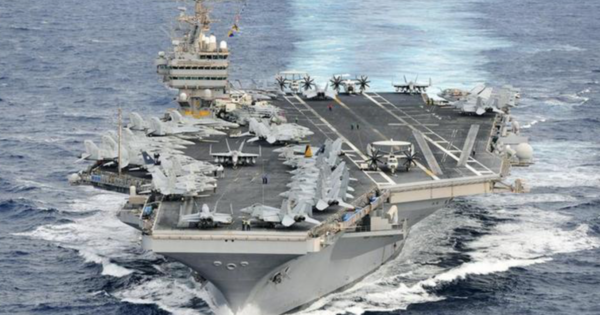 Trump’s advisor John Bolton has wanted a war with Iran for decades so allowing him to move a carrier group into striking distance is like eating in front of a starving man.

You can almost hear Bolton drool in anticipation.

Much of this moronic madness has been shaped by Trump’s total capture by Saudi Arabia. It means Trump’s infantile misreading of the previous arrangement that kept Iran from making nuclear weapons is more venal than stupid.

Which makes it more dangerous.

Trump knows the American resentment voter see cheap petrol as a birth right and he needs Saudi oil to keep that dream alive and if that means adopting a farcical and violent approach to Iran, then so be it.

The fact the intel that Iran was preparing to commit terrorist actions against American interests came from Israel also needs a moment of eye rolling.

Israel would love nothing more than to goad America into a military conflict with Iran, believing intel from them that just happens to align with Israel’s own ambitions is a bit too good to be true isn’t it?

We have every right to be fearful that this is going to explode into war because it ticks every box for Trump’s narcissism. He wants to impress the Saudis and Israelis while striking an enemy very far away.

The miscalculation here of course could be enormous. The theological deformity that is the Iran of today was caused by America interfering once before with a coup and the propping up of an authoritarian regime. Deciding to launch a pre-emptive strike against all of Iran’s nuclear facilities would be dangerous and enflame the entire region in an anti-American backlash the likes of which we would not have ever seen before.

Once in that kind of mess, Trump lacks any strategic capability other then to make things worse and worse.

The chance of some other player tricking Trump into military action is dangerously high.

I’m no apologist for the incompetence of the Venezuelan Government buuuuuuuuuut the role of America in destabilising the economy can’t be ignored. US sanctions on oil has crippled them because 95% of Venezuela’s exports are from oil.

America has intervened in South America with coups and right wing paramilitary death squads to over throw democratically elected Government 41 times, that’s almost one every 28 months!

An attempted coup with US Forces entering the country to support whatever faction will give American Oil companies a favourable slice of the oil industry is too risky because large parts of the Venezuelan Army won’t roll over and Trump doesn’t have the patience. That’s not to say he couldn’t be goaded or conned into some type of military strike using missiles against Government military targets if the Venezuelan Government commit an atrocity at a public rally or march.

Such turmoil would also trigger a vast wave of migrants fleeing the conflict. America would have every reason to build that wall then.

Watch for any oil companies setting up the ‘Venezuelan Freedom Committee’.

If you look around those who advise Trump on China policy coupled with Trump’s own limited understanding of what a trade deficit means and you appreciate the insanity at play here.

Trump fears a long drawn out war with anyone because he doesn’t have the capacity to think long enough about anything other than himself so if he can dominate in a way that doesn’t;t require much personal effort, he’ll take that.

Those who advise him on China see China as an existential threat to Pax Americana, they also believe China is far weaker economically than China pretend to be. Trump doesn’t want a deal with China, he wants a trade war with them because beating them economically is safer than fighting an actual physical war.

Trump keeps erratically changing the goal posts with China because he wants to rumble and hurt them enough to force them into containment.

The problem is that this also clips the wings of those US Corporations who have used China as a lowest cost labour source, problem for them is that Trump hates them too. He sees them keeping their factories offshore as a major problem so doesn’t;t mind burning them a bit as well.

The miscalculation here is that China will simply accept this attempt at containment and by repeatedly and publicly slapping the country in the face, back them into a corner from which they will not be able to do anything but become militarily aggressive.