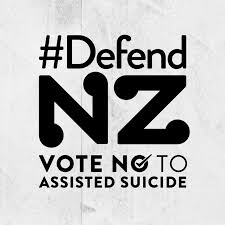 #DefendNZ – a grassroots movement opposed to the End of Life Choice Bill – has listed their Top 5 Reasons why MPs should vote “no” at its Second Reading.

1. The case has not been made that the current laws prohibiting assisted suicide and culpable homicide need to be changed.
2. Jurisdictions the world over are saying “no” to assisted suicide and euthanasia legislation.
3. The conversation about euthanasia doesn’t end if you vote “yes” to the End of Life Choice Bill at Second Reading – it gets bigger.
4. If you don’t want to see euthanasia for children or for people with disabilities, chronic conditions, mental illness, or dementia, you have to defeat this Bill.
5. The End of Life Choice Bill will never be safe, no matter how many changes are made to it.

The End of Life Choice Bill, should it pass, would put vulnerable people in danger of being coerced into requesting death, and of turning to death as a release from feelings of depression, anxiety, loneliness, or of concern about being a burden on loved ones.

Over the past month #DefendNZ has shared the stories of people who could be eligible for euthanasia or assisted suicide under this Bill: the realities of their contexts and struggles, and their concerns with this Bill and how it would affect them.

As a nation we value the safety and well-being of our most vulnerable citizens. Putting them at risk is not who we are. Local and international experts tell us euthanasia laws aren’t safe.