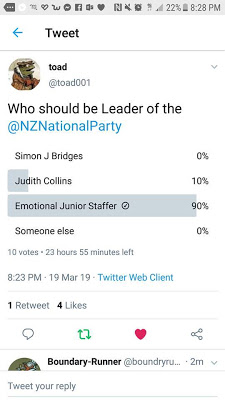 Now, in terms of my own thoughts about the above … whatever one thinks about immigration, and from wherever slash of whomever – the National Party’s claimed opposition to the UN Migration Pact has always rung so hollow, you could creatively refer to it as having achieved Nirvana [ok, well .. Sunyata; but there’s definitely no lights on inside, i’ll put it that way].

This is a party which, after all, presided over back-to-back-to-back record high immigration figures, while consciously tamping down proposals even from within its own membership to lower them [c.f. Bill English announcing such a policy .. and then walking it back a short while afterwards due to opposition from some farmers and employers] … and which had such a lackadaisical approach to the “protection of national sovereignty” and lawmaking ability which it *claimed* were core parts of its reasoning for opposing the UN Migration Pact – that it thought the ISDS provisions in the *original* #TPPA were a *good idea*. [They’re *still* not a good idea in the revised CPTPP agreement, but that is another story for another time, as best told by Professor Jane Kelsey].

Or, in other words, the Nats do not and have never really cared about the issues they purported to raise by pushing that petition.

They were doing it for mere “populist points”. Because apparently, the party which militantly blocked its own ears against the Voice of the People on, say, asset sales in the course of *that* referendum campaign … was all of a sudden going to be the People’s Microphone on a rather obscure piece of intergovernmental values-statement of little actual legal effect.

Or, to phrase it another way – this wasn’t really about “listening to New Zealanders”. it was about putting out a “YOU SHOULD BE REALLY CONCERNED ABOUT THIS” line into the polis, and then using that to try and make the Government of the day look scary, unrepresentative, and even more incredibly Globalist than the Nats themselves were for the previous nine years.

However, the risk with putting out emotive political content into the electorate … is that occasionally it comes back to bite you in the hand and/or posterior.

Now I’m NOT saying that National’s stance on the Migration Pact had much, if anything, to do with Friday’s atrocity. Because it probably didn’t. The terrorist in question claimed he had a thousand years or more of history to Wikipedia his way through and/or visit in person during his European jaunt to (mis)inform his views – with the obvious implication that no help from any New Zealand politician was required.

Had National *not* attempted to oppose the Migration Pact, I cannot see how anything would have really changed.

Yet someone in National was plainly aware that the ‘optics’ of the matter … were not going to look particularly good, in the blood-tinged aftermath of our worst-ever terrorist attack. And so – whether motivated by a sense of compassion (or, as Bridges put it today, the result of being both “emotional” and possibly also “junior”), or simply a desire to limit the potential finger-pointing post-facto from a PR perspective … somebody chose to remove the petition from public view.

Now, I’m not sure quite what to make of National’s changing story on the matter. It is at least possible that the conflicting statements are simply the result of an ‘evolving informational picture’. That is to say, somebody at National HQ not understanding that “unlisted” and “not viewable to the public” are not actually the same thing. It happens.

Yet it was Bridges’ response to a question asked earlier today, as to whether actually removing the petition was the right thing to do (you know, making reality finally accord with what National thought had been the case for a few weeks now, apparently – per their earlier statement, anyway… ) – “I think the reality is we’re not going to be critical of it because, as I say it’s a junior staff member, [who was] very emotional” – that caused me to wonder if this were really the case.

That implies that otherwise, they *would* be critical of it. But also states that they *aren’t* critical of it. It is, so to speak, a bob each way – with an emphasis upon “Emotionally affected Kiwis” getting a bit of slack given recent events.

And that, I think, is very, very deliberate play from National.

They’re as-yet uncertain which way both a) public opinion in general, but also b) the rather more specific sectors of opinion in various parts of the electorate which they either claim to represent or really want to win off at least one party in particular (you know, the one you would have *thought* would perhaps be opposing said UN Migration Pact were *it* not in Government) … which way those are going to go over the coming weeks and months as we head towards the next Election Year.

They *don’t* want to make it suddenly seem like they’re bowing to “PC”, or that they’ve suddenly stopped faux-caring about national sovereignty or immigration policy settings. That’d lose them the Talkback Brigade, and suchlike.

But they’re *also* acutely conscious that, for a pretty appreciably broad swathe of “Middle New Zealand” [often, but not always, where elections are actually won and lost – in those instances wherein they aren’t won by tactically nuking NZ First and/or other support parties] – Friday’s events represent something of a watershed in which the previously not-entirely-un-acceptable approach to speaking with perhaps outright concern about “Islam” , may now wind up being looked at with very different eyes, indeed.

About the only thing that *everybody* can agree upon, is that Friday’s literally atrocious events, have represented a considerable shock and emotive impact to both the collective and individual psyches of New Zealanders.

So any ‘inconsistency’ on National’s part .. well, “we’ll just chalk it up to that, then.”

In a curious bit of irony, that’s probably the closest thing we’re likely to see to empathy from Simon Bridges in a press conference, during the entirety of his (remaining) run as National Party Leader.

The point, I suppose, is that we have known for a long time now that National (and, to be fair, other parties too, especially when consigned to the relative discomforting boredom of Opposition), have long ago ceased in believing in acting as a genuine conveyor of polis opinion unto the corridors of power. Instead, they’ve “outsourced” that, to PR companies, lobbyists, and focus-groups. Which is rather like presuming that an elevator-muzak or cellphone ringtone version of a great opera is much the same thing, at best.

And often, instead, seems to be exactly the other way around to “representing public opinion”; rather becoming far more actively interested in “representing [often pre-formed] elite opinion to the public”.

Hence why you need the PR companies involved. And the lobbyists, to make sure you know just *which* ‘elites’ you should be listening to the loudest.

Now, there’s no “script” for what’s going on at the moment in New Zealand politics. Not really. I mean, there’s general platitudes, and there’s an array of foreign case-studies that are being cited about the place [the Howard Government in Australia pushing through firearms controls being Exhibit A upon everybody’s lips, it would seem] …. but just four days after the Atrocity in question, it’s *far* too soon to tell how things are likely to unfold.

Hell, there hasn’t even been time to start focus-grouping or whatever it is that the Nats do when they’re trying to figure out which way to arc a long-term policy/political trajectory on something potentially divisive. Or what colour ties Simon Bridges should wear. Or how long Judith Collins should spend outside of Cabinet following a corruption-tinged teacup-milk-scandal. Or the precise differential value of an Indian MP versus a Chinese MP for the sake of donation soliciting purposes. Etc. ETc. Etc.

So in the absence of anything hard or reliable [inasmuch as political opinion about anything ever actually is] to go upon, they’ve instead adopted a creative non-stance that *might look like* something else, in at least two directions. And which endeavours to hit the mid-point of the intersecting Venn Diagram with an ’emotive’ impact, regardless.

Very clever, in its own way. I wonder who wrote that for ’em.

As applies National actually deciding which way it’s going to go upon this, and quite a number of other somewhat related issues … I suspect we’re going to be left wondering for awhile yet. The dust takes time to clear on these things, which is what is required in order to perceive the best “optics” for the situation.

The National party are not, by instinct, these days “leaders” – they are “managers”.

Which is, one could argue, exactly the wrong set of priorities and proclivities, for an emergent and paradigm-reshaping [at least here in NZ politics] event such as this.