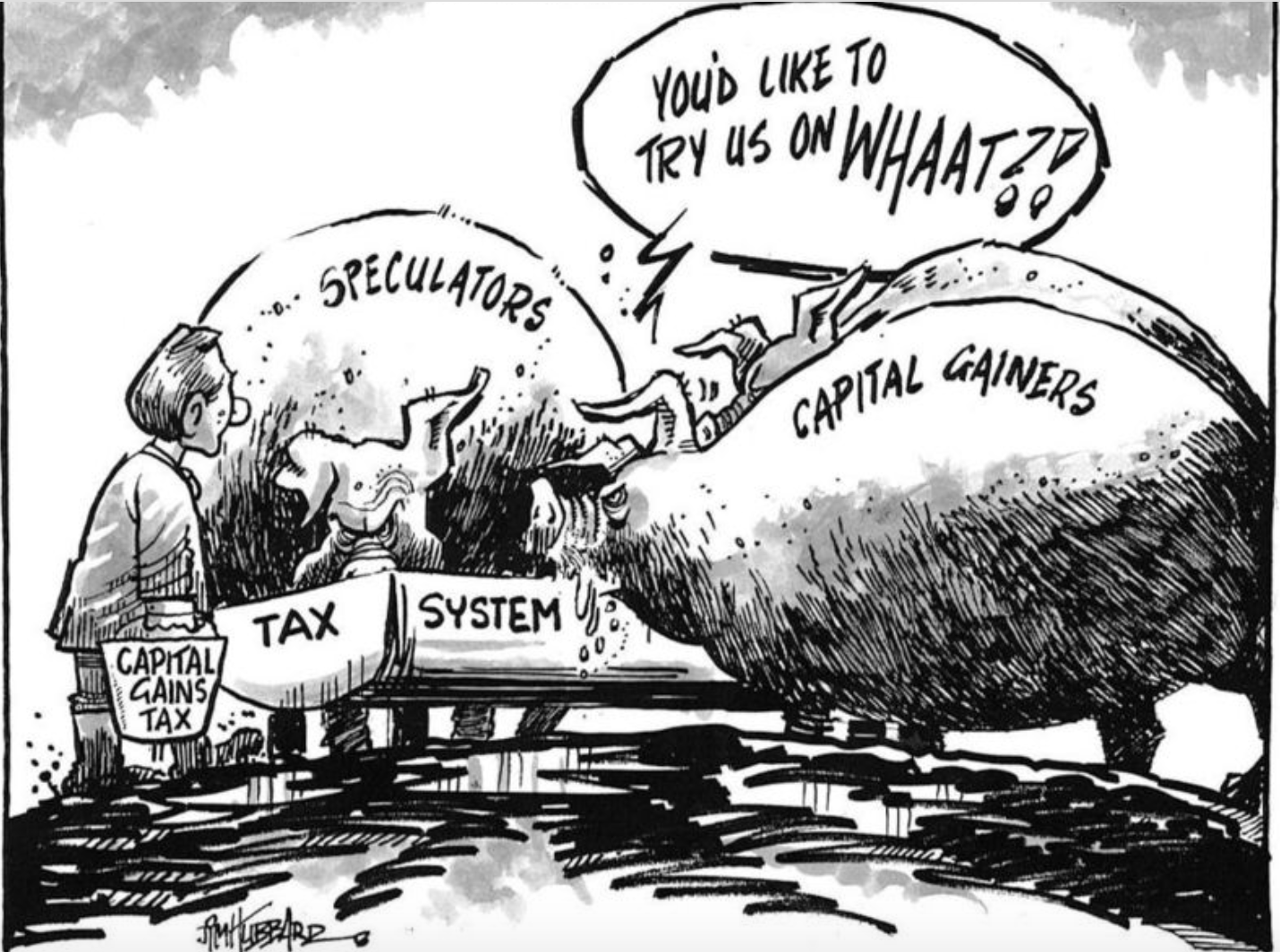 As property investors/speculators; assorted financiers; and their  political-wing, the National Party,  ramp up their opposition to a capital gains tax to a stridency approaching hysteria, current party leader, Simon Bridges, has used the mainstream media to push his highly propagandised (and highly emotive and misleading) messages;

“What the Kiwi way of life is is a recognition that New Zealanders aspire, they understand that people who work hard, who save, who invest, who take risks deserve the fruits of their labour and there is nothing fair about a capital gains tax that fundamentally gets in the way of that.”

He makes it sound as if property investment in New Zealand is akin to carving out and building a railway through the Himalayas.

On social media, Mr Bridges has used blitzed Twitter and Facebook with isolated examples of supposedly “contradictory cases” where CGT might or might not apply and has even taken to mis-representing aspects of how such a tax might apply (though he was quickly called out by other social media users).

Anyone would think that the Four Harleyriders Of The Apocalypse are bearing down upon us.

But Bridges miscalculated badly when one particular message posted on Twitter caught the eye of several users;

New Zealanders aspire & want to get ahead for themselves & their families. How is it right that an $8m home in Auckland won’t face a CGT but a couple scrimping and saving for a bach or crib for their family will get slammed with the top tax rate? That’s not the Kiwi way.

Homeless people living in garages and vans; families crammed into over-crowded houses; and even the home-seeking kids of the middle-class who cannot afford their own first homes would hardly be “The Kiwi Way“.

They would hardly be sympathetic to property owners lamenting having to “scrimp and save for a bach or crib“. Not many tears would be shed over “a bach or crib“.

Especially when many, if not most, if these “baches” and “cribs” are now substantial constructions and no longer the rustic cottages we once knew as kids.

As several Twitter-users pointed out;

“Because a primary home is a necessity; a beach house is a luxuary.”

“Babes if you don’t understand how CGT works maybe don’t get into it. And your mate’s kids might be “scrimping and saving” for a Bach but most of nz are just struggling to get a house deposit together thanks to the mess which is the property market xox”

“If you are scrimping perhaps a holiday home should not be a priority?”

“I don’t know anyone scrimping and saving for a batch. Just to get by each week yes. You are so out of touch bro.”

There were other criticisms made, with many pointing out to Mr Bridges that a capital gains tax would apply only to any profit made at the end of selling a bach/crib – not saving for it;

“It’s not profit unless you realise it by selling the asset, you mean”

But it speaks loudly that Mr Bridges is openly appealing to the propertied middle class – those who already hold assets.

He does not appear to be even remotely concerned at the homeless nor frustrated young home-seekers who have been forced out of the property market, and destined to forever rent. National could not even admit that a home ownership problem existed.

To do so would have been a tacit admission of failure.

The term “Generation Renters” exists for good reason, as economist Shamubeel Eaqub explained in 2015 (when National was strenuously  rejecting any suggestion of a housing crisis);

The facts, however, speak more clearly and truthfully than any rhetoric from the current leader of the National Party, desperate to shore up his waning support and struggling to remain relevent.  If Mr Bridges loses the CGT debate it will be another nail in his political coffin.

The data, however, is hard to dismiss:

Last year’s census results are not yet available according to Statistics NZ, but they are hardly likely to show any improvement.

The numbers show the dire state of our plummetting home ownership rates. If Mr Bridges was truly concerned for the “ordinary Kiwi battler”, he would be focused on those locked out of owning their own home instead of those already owning property and ‘aspiring’ to buy holiday homes on top of their bricks-and-mortar assets.

Instead, Mr Bridges’ comments about “a couple scrimping and saving for a bach or crib” indicates how utterly divorced he and his National Party fellow MPs are from mainstream, non-propertied New Zealand. The fact that most of them own investment properties should not be lost on us. They epitomise privilege.

National was certainly not reluctant to raise GST, prescription charges, family court fees, and a whole raft of other charges in 2010. Where was Mr Bridges then, championing those who “scrimp and save”, only to be hit by increased GST, medicine costs, and government charges?!

Mr Bridges and his privileged colleagues appear clearly wedded to protecting the interests of those for whom property investments has created mostly tax-free wealth. If ever there was a party for entrenched privilege, it is National.

It is also clear that those wanting to “get onto the first rung of the property ladder” need look elsewhere than the National Party. “Aspirational” for  the homeless and first home-owners means something completely different to National.

When a party leader unashamedly declares that he backs existing owners of property; wanting more property; without paying their fair share of tax on unearned gain on property – then those without property should look elsewhere.

The real question is not whether Mr Bridges and National are on the side of the property-owners or home-seekers. That question has well and truly been answered by Mr Bridges’ revealing ‘tweet’ above.

No, the real question now is, which side does NZ First want to be on?

What will be Winston Peters’ legacy? Aspirational home seekers or paper-wealthy property owners looking to increase their assets?

I know which one I’d want to be remembered for.

Note: This blog author is currently away from his main computer, so reference-links may not be as comprehensive as they normally are.

Radio NZ: Capital gains proposal – ‘What we’ve got here is a tax on a tax’ – Simon Bridges

The Daily Blog: ’The laughable myth of the ‘Kiwi way of life’

The Standard: Spare a thought for our poor impoverished landlords 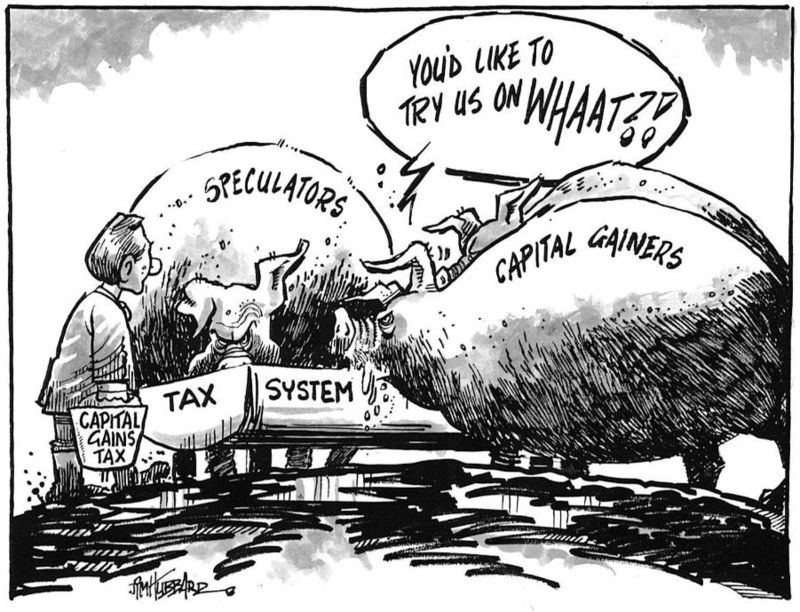