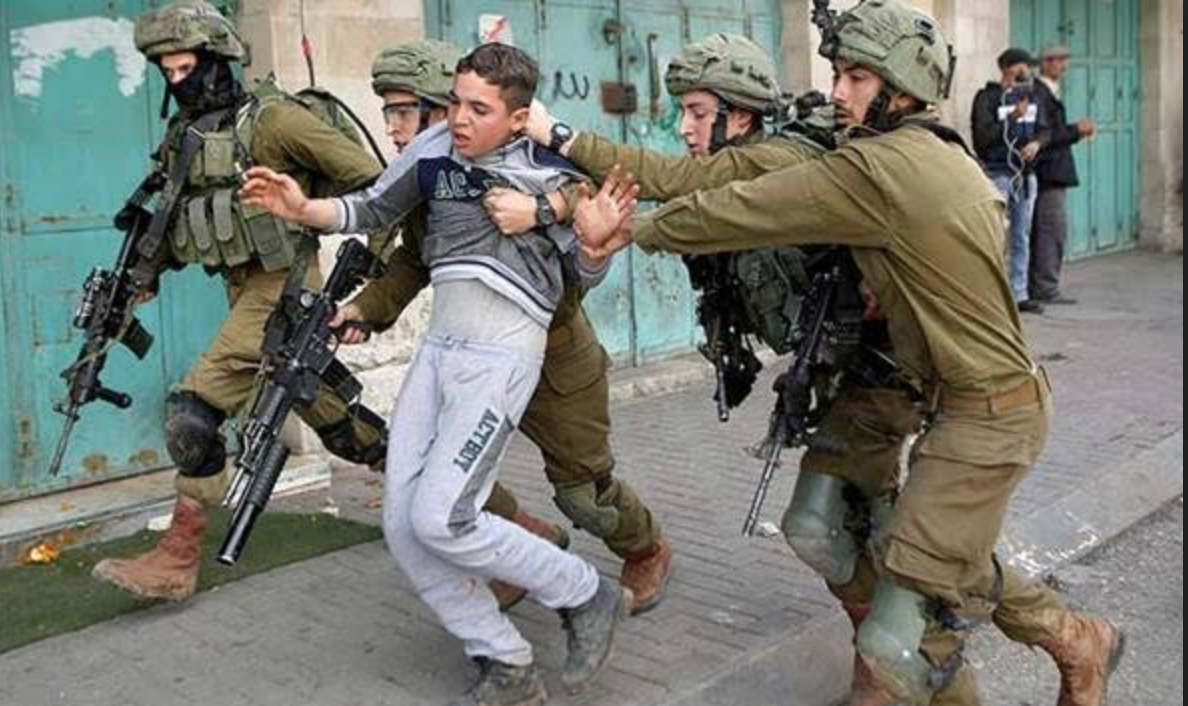 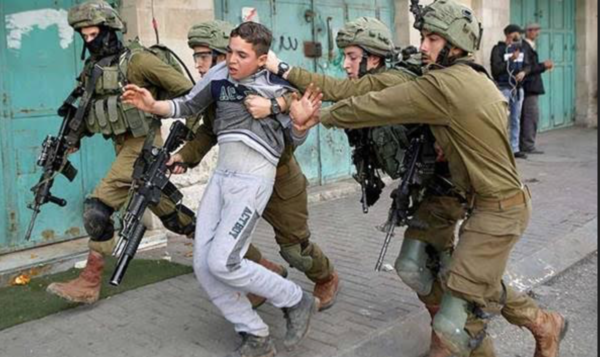 A former Israeli Prime Minister, Golda Meir, told the world: “We can forgive the Arabs for killing our children. We cannot forgive them for forcing us to kill their children. We will only have peace with the Arabs when they love their children more than they hate us.” Golda Meir’s twisted excuse for Zionist war crimes speaks volumes – as does the photo [see above] of four, heavily armed and protected Israeli soldiers, terrorising a defenceless young Palestinian boy in the Occupied West Bank. The soldiers’ fearlessness in seizing the boy is reinforced by their ability to outnumber him; all four can be seen manhandling him. The Israeli Army is aided in its provision of more than ample manpower through the generosity of US taxpayers. In 2016, the US Government guaranteed US$68 billion in economic and military aid to Israel over a ten-year period.

On 9 February this year, the Israeli musician, Jonathan Ofir, wrote: “We torture and terrorise the hell out of Palestinians in order to deter them and make their lives so miserable so they will want to leave – or to revenge, which will justify our next blow.” Referring to the Zionist pretence of making “the desert bloom”, Ofir comments: “And as this desert ‘blooms’ with yet another settlement, another fictitious ‘military zone’, another ‘expansion’ – the people who are there, the “others”, are gradually removed, encircled, or killed.”

US generosity towards Israel is countered by its meanness towards Palestinians. Since taking office, President Trump has reduced US aid to Palestinians by about US$500 million. Trump also withdrew all funding for the UN Relief and Works Agency (UNRWA), which needs to care for around five million Palestinian refugees. UNRWA schools and health clinics are now under threat of closure. In January, the US funding cuts forced the the World Food Programme (WFP), providing assistance to Palestinians in both Gaza and the West Bank, to announce severe aid reductions and even suspensions.

In 2018, Israeli forces killed 56 Palestinian children (more than one a week) mostly by gunfire but also with missiles launched by tanks and drones. Israel’s military Occupation of the West Bank and obsession with population control has an especially severe impact on Palestinian children. They can never feel safe, not even at night in their homes.

If anyone doubts that the Israeli Army is not filled with hatred and contempt for Palestinian children, they should watch this video of Israeli soldiers firing stun grenades and tear gas canisters as they attack three schools in a heavily built-up area. The absolute quiet is interrupted by the blast of Israeli Army stun grenades and growing numbers of tear gas canisters. With the children in their classrooms, attempting to study, three stun grenades are lobbed into the grounds of the schools and the noise from mounting tear gas grenade explosions increases. Even as they walk away from the scene, the soldiers stop from time to time, turning and subjecting the area behind them to further tear gas grenade launches. The street, local schools and homes are now filled with tear gas and the street is empty. The soldiers who lobbed the stun grenades over walls into school grounds could not possibly have known who may have been standing where they landed.

The video reveals that there was absolutely no action by any Palestinian child or adult that could have justified the Israeli violence. In addition to the residential buildings there are, in the immediate area, another three schools. Imagine trying to study under such conditions, not knowing if further violence was coming your way as tear gas gradually seeps into the classroom. At the end of January the UN issued a warning call for schoolchildren to be “better-protected from the effects of Israeli occupation”. In 2018, the UN documented 111 different cases of Israeli interference in West Bank education, affecting more than 19,000 children. “Children should never be the target of violence and must not be exposed to any form of violence”, said two senior UN officials, Jamie McGoldrick, UN Humanitarian Co-ordinator for the region and Special Representative, Genevieve Boutin, in a joint statement by UNICEF and UNESCO. Israel’s targeting of young Palestinians is designed to make population control that much easier. Any sign of resistance to military Occupation brings the dire threat of increased violence towards children. At the end of January, for example, the Israeli Army, opening fire with live ammunition, shot four Palestinian schoolchildren.

In February the terror continues

As the month of February passes, it looks as though Palestinian children are going to have to face growing Israeli Army violence. Here follows the toll for the month up until the nineteenth:

Wounding/injury:
A 17-year-old youth, Abdallah Ali Nubani, was wounded when Israeli forces opened fire with rubber-coated steel bullets, stun grenades and tear gas canisters against schoolchildren and other people during a raid on al-Sawiya village. In Jenin, the Israeli Army opened fire on two people riding a motorcycle on their way home from work, killing one and wounding another, Omar Ahmad Hanayna (16). Israeli forces, firing tear gas canisters, raided al-Labban al-Sharqiya village and searched a home, causing a five-year-old child to lose consciousness from tear gas poisoning. In Hebron, an Israeli settler vehicle ran over and hospitalised a 15-year-old boy, Ahmad Wajih.

The youngsters’ names are recorded here because they are not merely statistics. These are children, loved by their families, who have been subjected to brutal and fearful captivity in the name of a racist ideology. The effects of the abuse they suffer are both physical and mental. The world community owes them recognition and protection.

Youngsters terrorised:
In addition to abductions, during home invasions and other such raids, the Israeli military and police also subject Palestinian youngsters to sudden periods of terror and brief captivity, either in the streets or at school. Over the same period, Israeli soldiers in east al-Bireh seized a 17-year-old youth, Hisham Shadi Hisham Shanana, and held him captive for a time. In Jerusalem, the Israeli Occupation issued a house arrest order against a 14-year-old boy, Yusef Sami Dari, a resident of al-Eisawiya, and extorted 5000 NIS (US$1287 as a condition for his release from captivity. In Hebron, Israeli soldiers seized, and held captive for a time, a 16-year-old youth, Baha Ayed Ayed Al-Najjar, near the Al-Ibrahimi Mosque. In al-Bireh, Israeli soldiers seized, and terrorised, two schoolchildren making their way to the Al-Hashimiya School and forced them into the nearby Pesagout Israeli Occupation settlement, where they were held captive for some time.

Children are also terrorised when the Israeli Army forces them and their families out of their homes – on 13 February, the Israeli military forced 50 families from their homes, to make way for Israeli Army exercises in the Khirbeit Ras al-Ahmar al-Malah, al-Maytat and al-Bureij areas in the North Jordan Valley. One morning, Israeli forces, firing stun grenades and tear gas canisters in the street near Tariq Bin Zeid School, caused several tear gas casualties among the children. With Israeli Army complicity, Israel settlers also target Palestinian children.

On 14 February, a gang of Israeli Occupation settlers invaded Orif village farmland and raided a village school, smashing classroom windows. The Israeli Army came to the assistance of the settlers and opened fire with rubber-coated steel bullets, stun grenades and tear gas canisters at people who came to defend the school. Two people, Usayed Daoud Al-Safadi and Ammar Fawzi Shihada, were wounded and another person was taken prisoner. On 19 February, Israeli forces in Bethlehem set up a checkpoint near a boys’ school in Nahalin, seizing and holding captive, for a time, a number of children.

The fusion of ideology and religion

The evolution of the Zionist enterprise has entered another phase. On 13 February Jonathan Cook, a British journalist based in Nazareth since 2001, published an article on the ascendancy of religious fanaticism within the movement and particularly with regard to the Occupation. Cook remarks: “There are many grounds for criticising Israel, including its brutal oppression of Palestinians under occupation and its system of institutionalised segregation and discrimination against the fifth of its population who are not Jewish – its Palestinian minority. But largely ignored by critics have been Israel’s increasing theocratic tendencies.” And yet, as Cook observes: “There is barely a politician in Washington seeking election who has not at some point declared an ‘unbreakable bond‘ between the United States and Israel, or claimed the two uphold ‘shared values’.”

With half of Israel’s military academies now religious, the views of extremist Orthodox rabbis are increasingly indoctrinating Israeli soldiers. Cook tells us that, “In Israel’s 2008-09 ground invasion of Gaza, soldiers were issued with pamphlets by the army rabbinate using Biblical injunctions to persuade them to ‘show no mercy’ to Palestinians.”

In the oppressive Israeli settlement world, hatred of Palestinians is entrenched. The King’s Torah (Torat Hamelech), a book by two residents, Rabbis Yitzhak Shapira and Yosef Elitzur, in the Israeli Occupation Yitzhar settlement, expresses the view that “The prohibition ‘Thou Shalt Not Murder’ applies only ‘to a Jew who kills a Jew’.” Jonathan Cook reveals that the book tells us non-Jews have no compassion and that, as attacks on them help to “curb their evil inclination”, their babies and children may be killed since “it is clear that they will grow to harm us.”

This fanaticism is well established in Israel’s national police force. Cook informs us, “top posts are now in the hands of hardline religious settlers . . .” Another promoter of the book The King’s Torah, is the police force’s chief rabbi, Rahamim Brachyahu. As far back as 2004, a judicial-led commission of inquiry concluded that the Israeli police were “institutionally racist”.

In October last year, Israel’s Education Minister, Naftali Bennett, was reported by the Times of Israel as keen to impose a “shoot-to-kill” policy in Gaza, including against Palestinian children. Bennett made the comment on Israel’s Army Radio after he was asked what he would do differently if he were the defence minister. Bennett replied: “Everything”. Asked if he would instruct the Israeli Army to adopt a shoot-to-kill policy against Palestinian children, he replied: “They are not children — they are terrorists. We are fooling ourselves.”

Amid an unprecedented humanitarian funding crisis, world leaders fail to bring Israel to account and instead pose as caring for the victims by subsidising reparations for the damage caused by Israel. The Fourth Geneva Convention undeniably places responsibility for the consequences of Zionist population control and blockade of Palestine upon the Occupying power itself. The Palestinian people have the right to resist and are appealing to the International Criminal Court. While the Court is undertaking a preliminary examination of human rights violations in the West Bank and Gaza, Palestinians are willing to face inevitable Israeli accusations at The Hague because it is the only way to fairly deal with the evidence and seek justice.

End the silence and help to defend the children by making it clear to Israel that the New Zealand people repudiate Zionism, do not share its values and utterly condemn Israel’s racist war crimes and inhumanities. Our Government must act in recognition of the duty it shares with the international community to uphold the Universal Declaration of Human Rights. Until Israel declares an end to its West Bank military Occupation, Gaza blockade and discrimination against its citizens, New Zealand should cease all co-operation with Israel.