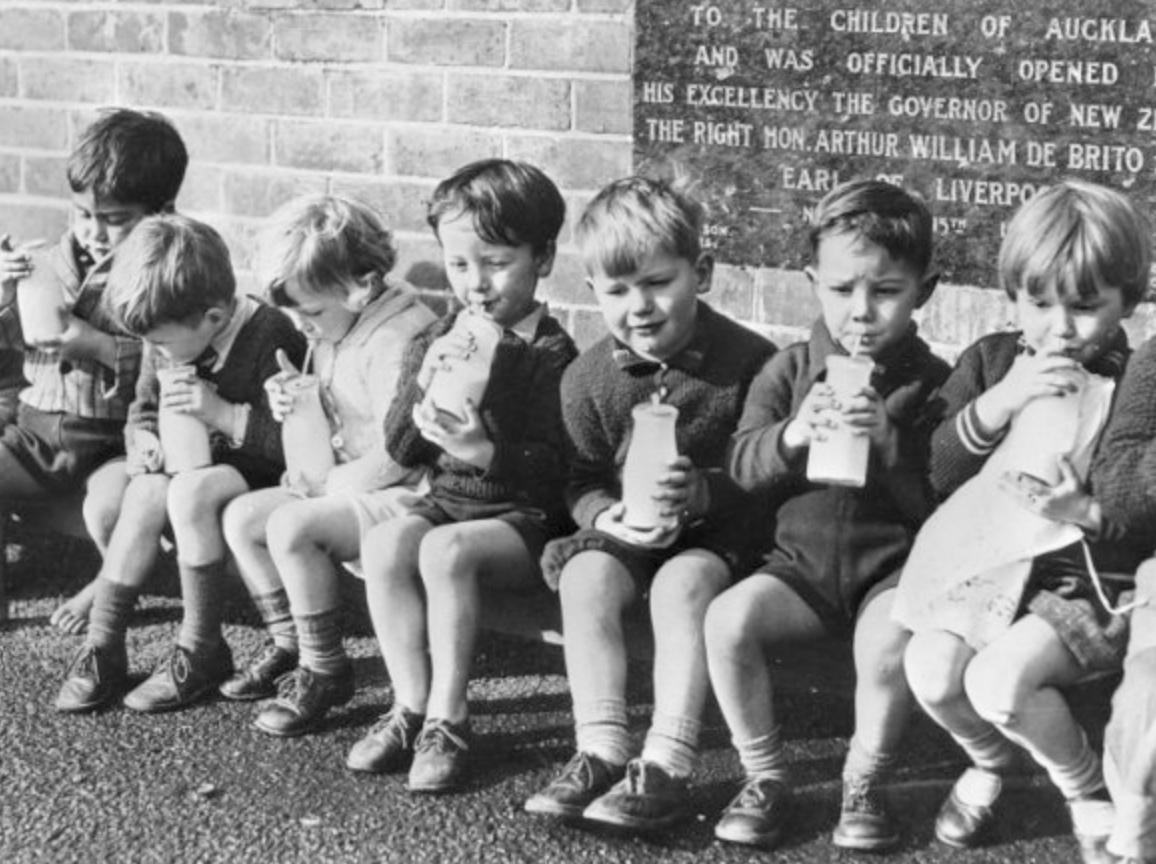 It is a given that most politicians will do whatever it takes to win voters to get elected. It’s pretty much why their reputation is often at the same level as telemarketers and sex-workers (which, fair to say, is a slight on sex workers and telemarketers).

The responsibility for our perceived untrustworthiness of politicians is generally laid directly at their feet, when they often say things that are;

Our previous prime minister, John Key, could be flexible with the truth – and the public knew it.

Usually one of National’s more sensible and mature MPs, she took a swipe at Green Party MP, Gareth Hughes’ call to restrict unhealthy foods sold in schools and instead opt for healthier options;

“Last year we saw 29,000 kids have their teeth pulled, obesity is going up – we are facing an epidemic – and our schools are still selling pies and cokes and chips and lollies.

I think we’re a food bowl in New Zealand. We could be providing nutritious, affordable food for every kid.”

Ms Kaye’s response was to drag out the old “Nanny State bogeyman;

Her snide dismissal of addressing this crisis in our children’s health flies in the fact that obesity is a growing epidemic in our country. According to a recent statement from the Ministry of Health;

New Zealand has the third highest adult obesity rate in the OECD, and our rates are rising. Almost one in three adult New Zealanders (over 15 years) is obese, and one in ten children.

Ministry of Health statistics show a grim increase in our obesity levels – including for our children;

The increase in child obesity occurred under National’s watch and was not helped by then-Minister of Education, Anne Tolley and then-Minister of Health, Tony Ryall, who scrapped the previous Labour government’s Healthy Food in Schools policy;

By 2038, an estimated two million New Zealanders will be obese, according to Otago University. The additional pressures on our health system with increased diabetes, heart disease, etc, will be staggering.

Even National could no longer ignore our worsening obesity epidemic. In October 2015, the Ministry of Health launched a Childhood obesity plan. The policy appeared largely ineffective as obesity levels grew.

And even Nikki Kaye understood the looming crisis, when she stated in April last year; 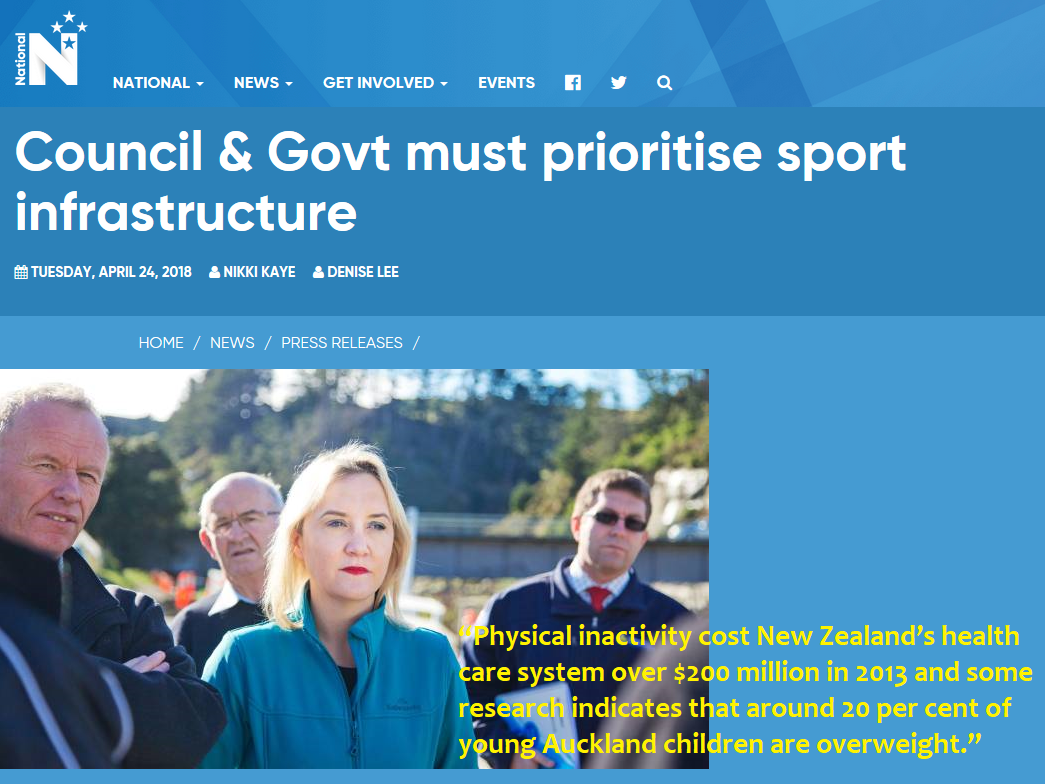 “Physical inactivity cost New Zealand’s health care system over $200 million in 2013 and some research indicates that around 20 per cent of young Auckland children are overweight.

The Education Minister needs to continue the Auckland Education Growth Plan which was being worked on by the previous Government and was due to be considered by Cabinet last November. It is important to look at the work done so far to factor in potential opportunities around sport and recreational infrastructure.

We must prioritise sport and recreation in our communities and Auckland Council and the Government must front up with more funding to support Auckland’s sporting infrastructure.”

Nowhere does she address the grim reality that we are feeding crap “food” to our children.

National MPs would be hysterical with rage if marijuana, alcohol, tobacco, etc, was made legally available to children. Not for one moment would they accept the nonsensical proposition that banning children from accessing such drugs (whether legal or not) would be  “Nanny Statish”.

But when it comes to crap food with high levels of salt, fat, and sugar – then it’s acceptable to National MPs. It becomes a “free choice” issue. That’s despite a supposedly intelligent, well-informed person like Ms Kaye being cognisant of the fact that “… around 20 per cent of young Auckland children are overweight”.

Referring to plans to combat rising obesity in our children should be a social responsibility, just as preventing drink-driving and smoking in restaurants and bars became the norm.

Labelling anything that reduced child obesity as “nanny state” is reprehensible because it plays politics with our young people. Invoking “nanny state” to win a few votes is self-serving.

A politician who casually parrots and throws around catch-phrases like “Nanny State” exploits the health of our children for personal gain.

Ms Kaye should reconsider her stance on healthy food in our schools. Or consider changing professions to something equivalent to political activity – but not likely to be a liability to our children’s health.

Bay of Plenty Times: So, just how trusted is your profession?

Interest: National would phase in ETS obligations for transport, electricity, industrial sectors; Will review Agriculture in 2014, will only put it in if technology to help is there 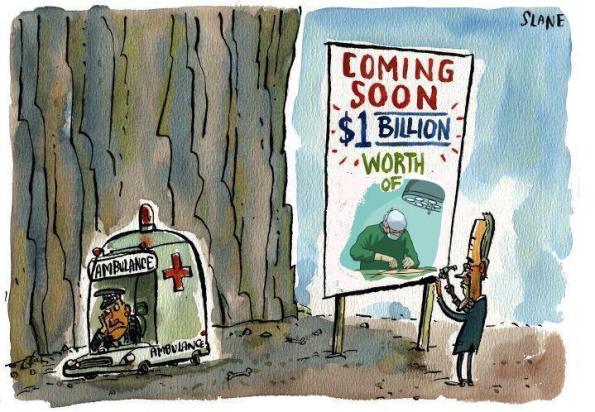