National’s List MP, Dr Parmjeet Parmar, has launched a scathing attack on Housing NZ on social media and in a story in the NZ Herald; 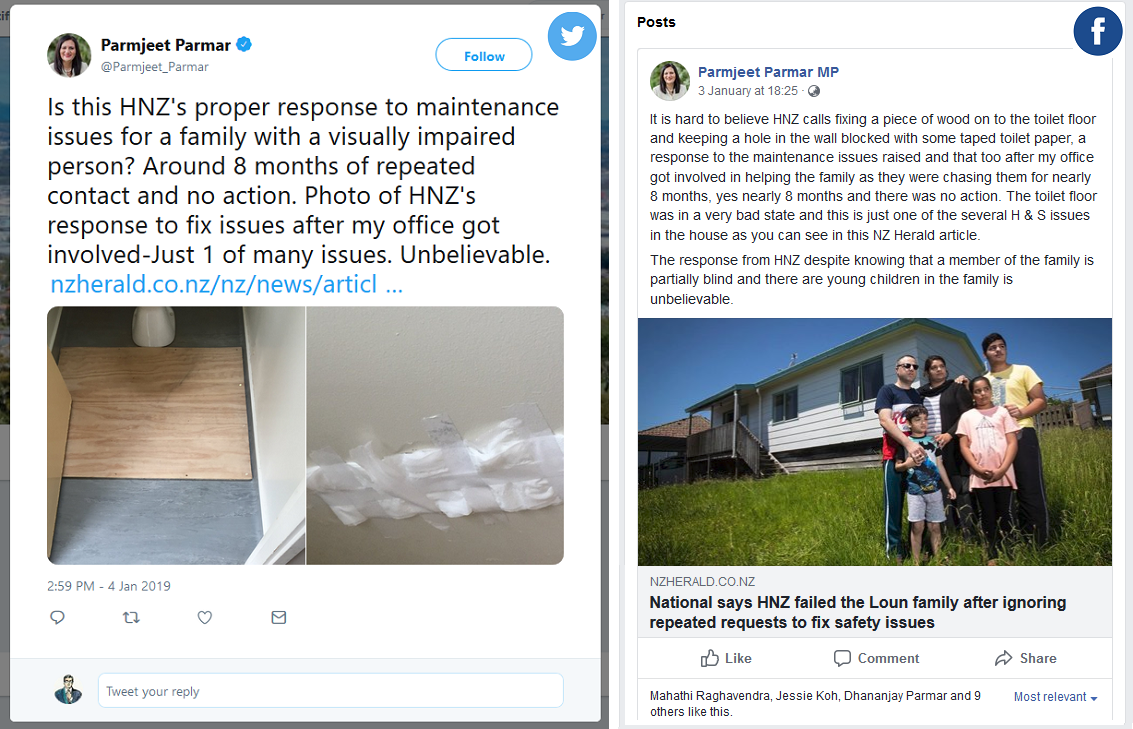 The family was living in a HNZ property that was obviously sub-standard;

The toilet floor had sunk into the ground, making it difficult for Sheraz to use, given his condition.

The shower is also problematic for him as it’s inside a deep bathtub and he needs his wife’s help to use it.

The family has also complained about bugs coming through a hole in the wall of the bathroom.

The hole has been plugged by toilet paper, while a piece of wood was placed to cover the bathroom floor.

But Ms Parmar noticeably glossed over a salient point regarding the state of the NZH property;

“The Loun family, two parents and three kids, have been complaining to HNZ about rats, fleas, bugs, an unsafe bathroom and an unsuitable shower at the property for eight months.” – NZ Herald

Fun Fact 1: That suggests this problem has been ongoing since before the election of the current government. In essence, the rot set in (literally!) during National’s term in office.

This brings back memories of Emma-Lita Bourne, who was two years old in 2014, when she perished from a brain haemorrhage resulting from a clot. She had been suffering from a pneumonia-like illness. The toddler and her family had also been living in a sub-standard HNZ property that was cold, damp, had mould on the walls and floor, and the roof leaked.

“I am of the view the condition of the house at the time being cold and damp during the winter months was a contributing factor to Emma-Lita’s health status.”

Fun Fact 2: Ms Parmar was a Member of Parliament at the time of the Coroner’s findings into Emma-Lita’s death.

In October 2015, Labour’s Phil Twyford introduced the Healthy Homes Guarantee Bill to Parliament. That Bill  – eventually passed in November 2017 – would create a “warrant of fitness” for rental properties.

Ms Parmar voted against the very thing she was railing against on social media and the Herald.

By 2014 – when Ms Paramar entered Parliament, the number of state houses had dropped to 68,229 – a loss of 771 potential homes for the most needy families and individuals in this country.

National’s policy of selling state housing was obviously proceeding at pace despite Housing NZ posting a loss on the sale of properties of $10,781,000 for the financial year (Annual Report, p108);

This is still a far cry from the 69,000 properties owned by Housing NZ when National took office.

Fun Fact 5: Ms Parmar was part of a government that sold/disposed of 7,500 properties.

Fun Fact 7: Whilst the National government – of which Ms Parmar was an eagerly participating member – was busily selling off state housing, the waiting list for people needing a home was steadily rising;

Fun Fact 8: When Ms Parmar entered Parliament in September 2014, there were 4,189 people on Housing NZ’s waiting list.  By the time voters threw out the National government in late 2017, that number had risen to 6,182.

Fun Fact 9: The government department tasked with looking after some of the most vulnerable, poverty-stricken families and individuals was stripped of “dividends” of $532 million from 2010 to 2015 – over half a billion dollars. The dividends did not include gst and interest payments from Housing NZ to central government;

At a time when thousands were on a waiting list for a home and entire families were living in over-crowded houses; garages, and cars and vans – National was helping itself to cash that could have alleviated a large measure of homelessness.

(Note: Labour, under the Clark/Cullen leadership, also demanded dividends from Housing NZ. It is nothing to be proud of that Budget surpluses were achieved – in part – off the backs of the poor. At least Labour did not cut taxes, as National did in 2009 and 2010, thereby transferring wealth from the poor/HNZ tenants – to the wealthy/high-income earners.)

The Loun family’s HNZ home could have been properly maintained and ongoing faults repaired with that $532 million.

If Ms Parmar wants to vent her anger, she should direct it at herself and her colleagues. It is National (and it’s minor support parties) that are solely to blame for our growing homeless crisis. At a time when New Zealand most needed state houses, National was disposing of them as fast as they thought they could get away with it, as well as bleeding the corporation of it’s money.

So much for John Key promising no further asset sales in February 2014;

But former Dear Leader Key was not the only one “flexible” with the truth.

Fun Fact 11: A year after entering Parliament, Ms Parmar was caught out attempting to mis-use taxpayer’s money by exploiting an official government housing “roadshow” to promote her personal political profile in the Mt Roskill electorate. The Mt Roskill electorate would shortly be vacated by then-sitting MP,  Phil Goff, who was planning to run for mayor of Auckland. 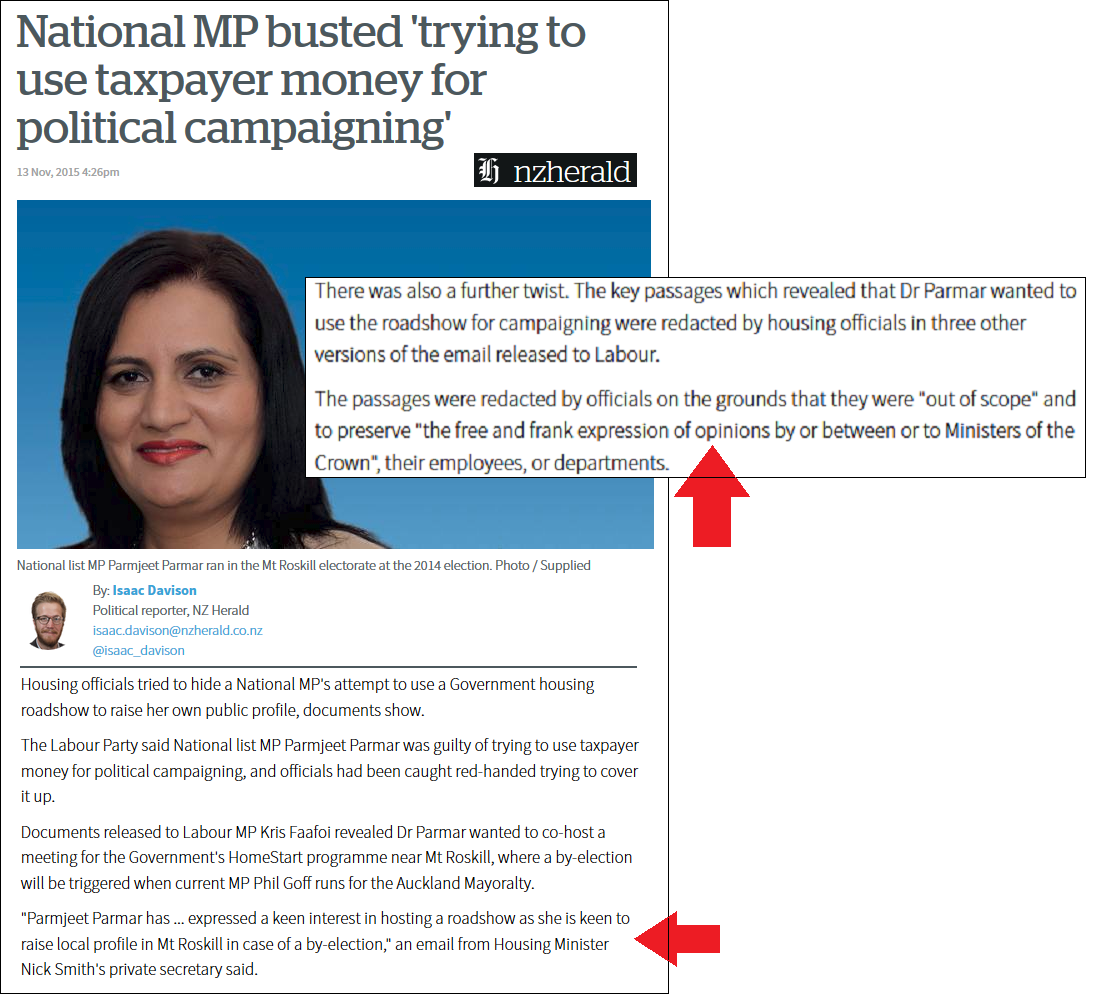 According to documents released under the OIA, NZ Herald  journalists discovered that Housing NZ officials were attempting to cover up for Ms Parmar;

Housing officials tried to hide a National MP’s attempt to use a Government housing roadshow to raise her own public profile, documents show.

The Labour Party said National list MP Parmjeet Parmar was guilty of trying to use taxpayer money for political campaigning, and officials had been caught red-handed trying to cover it up.

Documents released to Labour MP Kris Faafoi revealed Dr Parmar wanted to co-host a meeting for the Government’s HomeStart programme near Mt Roskill, where a by-election will be triggered when current MP Phil Goff runs for the Auckland Mayoralty.

“Parmjeet Parmar has … expressed a keen interest in hosting a roadshow as she is keen to raise local profile in Mt Roskill in case of a by-election,” an email from Housing Minister Nick Smith’s private secretary said.

Supposedly “neutral” civil servants were caught out attempting to suppress Ms Parmar’s plans to use the housing roadshow for her own benefit;

There was also a further twist. The key passages which revealed that Dr Parmar wanted to use the roadshow for campaigning were redacted by housing officials in three other versions of the email released to Labour.

The passages were redacted by officials on the grounds that they were “out of scope” and to preserve “the free and frank expression of opinions by or between or to Ministers of the Crown”, their employees, or departments.

It is unknown if any of the Housing officials who attempted to cover for Ms Parmar were asked to resign. It would be surprising if there were any ensuing job losses from this scandal.

If  Ms Parmar wants to use her taxpayer-funded time lambasting Housing NZ, that is her prerogative.

But at the very least, it would be helpful for New Zealanders to understand the fullness of National’s woeful under-performance in the state housing sector and the role Ms Parmar played. At the very least she exhibited no moral courage on behalf on HNZ tenants whilst she was in government.

There is something repellent about a previous government that actively sabotaged and crippled a vital state housing service – only for former Finance minister Bill English to lament about that very same service unable to fulfill it’s duty to house the most vulnerable families in our society;

“Housing Corp has done its best with the policy settings governments have given them over the last twenty or thirty years.

But you’ve just got to drive round the countryside, or round the cities and suburbs to see that it hasn’t always had the best results. So we just want to get more people helping us to solve the problem of serious housing need.”

This is the legacy Ms Parmar shares.

The Daily Blog: I’m sorry, National had the audacity to say WHAT about State Housing?

The Daily blog: The MPs who voted against Warrants of Fitness for all rental properties

NZ Herald: PM – no more SOEs to sell after Genesis 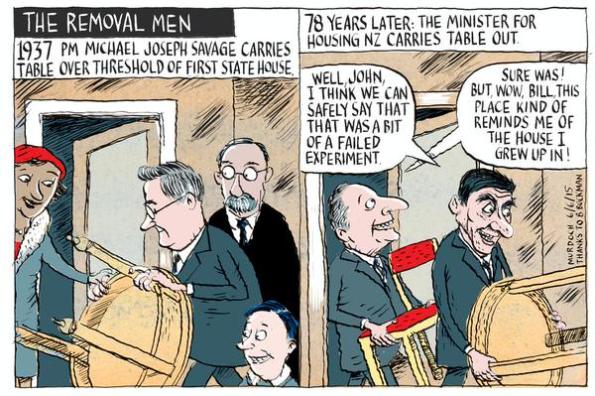