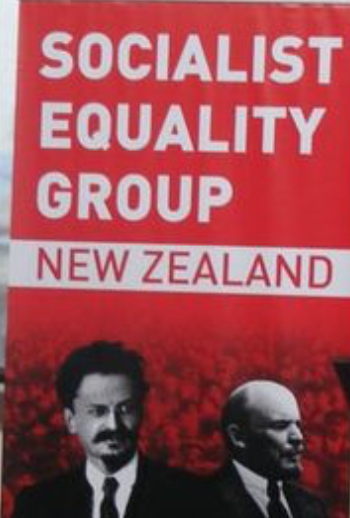 When the Labour Party-led government was installed in October 2017, Prime Minister Jacinda Ardern declared that her priority would be to turn around homelessness and child poverty figures. Deputy Prime Minister and NZ First leader Winston Peters promised to restore “capitalism’s human face.”

Liberal commentators, trade union leaders and pseudo-left groups all joined in a chorus of praise for the “reformist” government. The media fawned over Ardern for having a baby and being a “working mother,” implying she would be more sympathetic to working people.

More than a year of continuing austerity and deepening social inequality has exposed the government’s promises as a fraud. The gap between rich and poor is widening and levels of food insecurity, homelessness and suicide are continuing to soar.

Official statistics released this month show that the richest 20 percent of New Zealand households have increased their net worth by $394,000 since 2015 and are now worth a median $1.75 million. This layer controls 70 percent of household wealth, while the top 1 percent has 20 percent of all assets.

The poorest 50 percent of adults, 1.8 million people, hold just 2 percent of net wealth. The bottom 40 percent has seen no increase in wealth over the past three years as the cost of living, especially housing and fuel, has soared.

One indicator of widespread social misery is the record number of people resorting to charity to feed their families over Christmas. The Christchurch City Mission reported that demand for food parcels had increased 45 percent as compared to the same time last year, with a large number of working people unable to afford the basics.

The Auckland City Mission told the media it had handed out 8,500 Christmas hampers over 10 days, double the amount compared to last year, and was still unable to meet the demand. On December 19 alone, about 400 families were turned away after the charity ran out of food. Missioner Chris Farrelly told Radio NZ: “It’s been quite overwhelming and shocking for us to see just the volumes of people… there is significant food poverty in this country—we’re seeing here, at the moment, the real hard end of it.”

The government has promised to halve child poverty, but its time frame is 10 years, making the promise essentially meaningless. Welfare and wage increases have been insufficient to meet the cost of living. Labour has refused to increase taxes on the rich and corporations, and kept spending levels relative to gross domestic product at the same level as the previous National Party government. Meanwhile, billions of dollars are being spent on upgrading the military and expanding the police force.

The austerity measures provoked an upsurge of working class struggles in 2018, including nationwide strikes by nurses and teachers.

The government’s Child Poverty Monitor report, released on December 10, found that between 161,000 and 188,000 children, one in five, live in households with “moderate to severe food insecurity,” and 18 percent receive help from food charities.

Children’s Commissioner Andrew Becroft told Radio NZ there had been “no real change” in child poverty levels in the past year. He added that due to inadequate housing children living in the poorest areas were three times more likely to be hospitalised for respiratory illnesses than those in more affluent areas.

In April the Child and Youth Mortality Review Committee reported that children living in “the most deprived areas” are three times more likely to die in childhood or adolescence than those in the least deprived areas. The leading cause of death for teenagers aged 15 and over was suicide.

In the 12 months to August, 668 New Zealanders took their own lives, an all-time annual record. Maori men, one of the most exploited sections of the working class, were over-represented with 97 suicides.

Cannons Creek, Porirua, one of the poorest suburbs in the country, experienced six suicides between June and October, out of a population of around 8,000. Five of those who took their own lives were under 30 years old.

Anjanette, a local resident who has been unemployed for five years, told the World Socialist Web Site she was not surprised by the tragic toll: “There’s no jobs at all. Two of my daughters are on benefits and they have young kids. The government doesn’t give a hoot. The poor get poorer every day.” In the 2013 census about one in five people in the suburb was unemployed and its median income was about $10,000 below the national median of $28,500.

Anjanette explained that looking for work was “very stressful because I’m under so much pressure. I get depression. Heaps of people are being pushed into a corner they can’t get out of.” The attitude of Work and Income New Zealand (WINZ), the social welfare agency, was: “Get over yourself, stop making excuses, get a job.”

She received a benefit of $283 a week and paid $200 in rent. “It’s a broken-down home,” she said. “I live with my daughter and two grandkids. We’re both unemployed and paying $200. Landlords can up the rent any time they like, WINZ don’t understand.”

The government has promised to upgrade 2,000 state homes in Eastern Porirua over the next 25 years, but the total supply will only be expanded by 150 homes. Fairfax Media reported that there are currently 303 people on the waiting list for public housing in the area.

Anjanette had voted for the Green Party and Labour, but said “it was a stupid mistake.” The parties’ promises to reduce poverty and stop mistreating people on welfare were “the biggest lies of all.”

Zac, a 17-year-old Cannons Creek resident, believed “the majority of youth have more mental health problems” than older people, and poverty was a factor. “Some parents have seven kids and work 12-hour shifts every single day. They try and get food for their kids and they don’t have enough money,” he said.

“I’ve experienced depression and I know other people who have, and who have committed suicide or tried to, and survived,” he continued. “I just finished school and I don’t really know what to do. I’ve been looking at tech jobs and someone from my church is trying to help me.

“Other people can’t handle the stress of trying to find a job, they’ve just finished school and probably their parents are pressuring them to find a job. I know some people that start working pretty young and are trying to help their family out with rent, with putting food on the table. They sleep during the whole school day sometimes. It’s pretty common.”