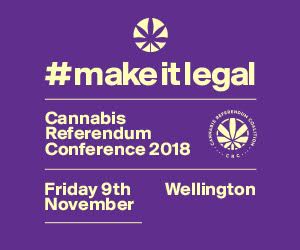 Cannabis legalisation is the goal of the Cannabis Referendum Coalition,
formed this year to win the promised referendum on legalising personal
use of cannabis.

The conference will open with a panel discussion on what has been
learned from this year’s debate on medicinal cannabis. Panellists
include Chlöe Swarbrick MP, Manu Caddie, Shane Le Brun and Rebecca Reider.

“The referendum question needs to not only gauge support for legalising
adult, personal use – but also to canvas public support for a regulated
market allowing legal supply and sale of cannabis,” says coordinator
Sandi Murray.

“The conference will look at a range of legalising options, including
“Grow Your Own”, Cannabis Social Clubs and moving to allow legal,
licenced growers and licenced sellers,” says conference organiser Phil
Saxby.

The Regulated Market model would be presented by Greg O’Connor MP and Dr
Eric Crampton.

A panel of MPs will discuss the mechanism of the referendum itself, and
the sort of education process that will precede the vote. To date, no
decisions have been announced on the timing or the format of the
cannabis referendum.

“Our goal at the conference is to support and bring together the many
groups and individuals who want an end to failed prohibitionist
policies,” said Ms Murray. “We will facilitate campaign planning in the
afternoon session to build a networked campaign among supporters”.

“Uruguay led the world with full legalisation of cannabis,” says Mr
Saxby. “With Canada and South Africa both recently moving to legalise
cannabis, and some Commonwealth countries and many American States
following suit, it’s time for a change in Aotearoa New Zealand, to end
this destructive and failed law and #makeitlegal.”

Other speakers at the conference will include Dr Fiona Hutton and Nándor
Tánczos.

Ginny Anderson is the Labour list MP based in Hutt South, Governance &
Administration Committee Deputy-Chair, and a Justice Committee member.
Before becoming an MP, she worked in Parliament as a private secretary
and senior political adviser, in the Office of Treaty Settlements in
negotiations and policy, and for the NZ Police in reducing harm from
gangs, organised crime and methamphetamine.

Manu Caddie is managing director of Hikurangi Enterprises, which has
5000 plants ready for harvest in Ruatoria north of Gisborne. If the
Government passes medicinal cannabis legislation this year that allows
for the commercialisation of medicinal cannabis crops, Hikurangi would
be the industry’s first legal grower.

Dr Eric Crampton is Chief Economist with the New Zealand Initiative in
Wellington. He is a prominent commenter on the economics of public
health and the economics of drug policy. He is author of several reports
with the Initiative, including work on post-earthquake policy in
Christchurch, regulatory responses to digital innovation, and regional
policy trials. From 2003 through 2014, he served as lecturer and senior
lecturer with the Department of Economics at the University of Canterbury.

Shane Le Brun comes from a military background and admits to a
narrow-minded view of medicinal cannabis at one time. That changed when
his wife Kat injured her lower back and was left with chronic pain. He
now promotes community awareness of the medicinal uses of cannabis,
having established the charity Medical Cannabis Awareness New Zealand to
“Put People before Politics”.

Greg O’Connor was elected last year as the Labour MP for Ōhāriu,
representing Wellington’s north western suburbs. Before coming to
Parliament, Greg represented the Police Association for 2 decades and is
a proven advocate for people. At Parliament he sits on the Justice and
Social Services & Community select committees. He has experience in the
law and order and disability sectors, and a long-term interest in drug
law reform issues.

Rebecca Reider is a dedicated cannabis campaigner, as well as a
journalist, administrator and editor. She has used cannabis medicinally
for many years for a chronic health condition. In 2015, the NZ Police
raided her home and decided to prosecute her on a long list of cannabis
charges. Her court case set off a chain of events that briefly opened an
import pathway, and in 2016 Rebecca became the first person to legally
possess raw herbal cannabis in New Zealand in over 50 years.

Chlöe Swarbrick is a New Zealand politician and entrepreneur. Following
a high-profile but unsuccessful run for the 2016 Auckland mayoral
election, she became Maungakiekie candidate for the Green Party and was
elected in 2017 for the Party List. Chloe promoted a private members’
Bill on medicinal cannabis in 2018, achieving considerable support for
the Bill.

Nándor Tánczos is an English-born social ecologist, researcher,
educator, activist and political commentator. He is currently a
councillor in the Whakatane District and Chair of Permaculture in New
Zealand. He is also co-director of He Puna Manawa social and political
change agency. He was an MP from 1999-2008 and represented the Green
Party, putting forward NZ’s first private members Bill on cannabis law
reform.