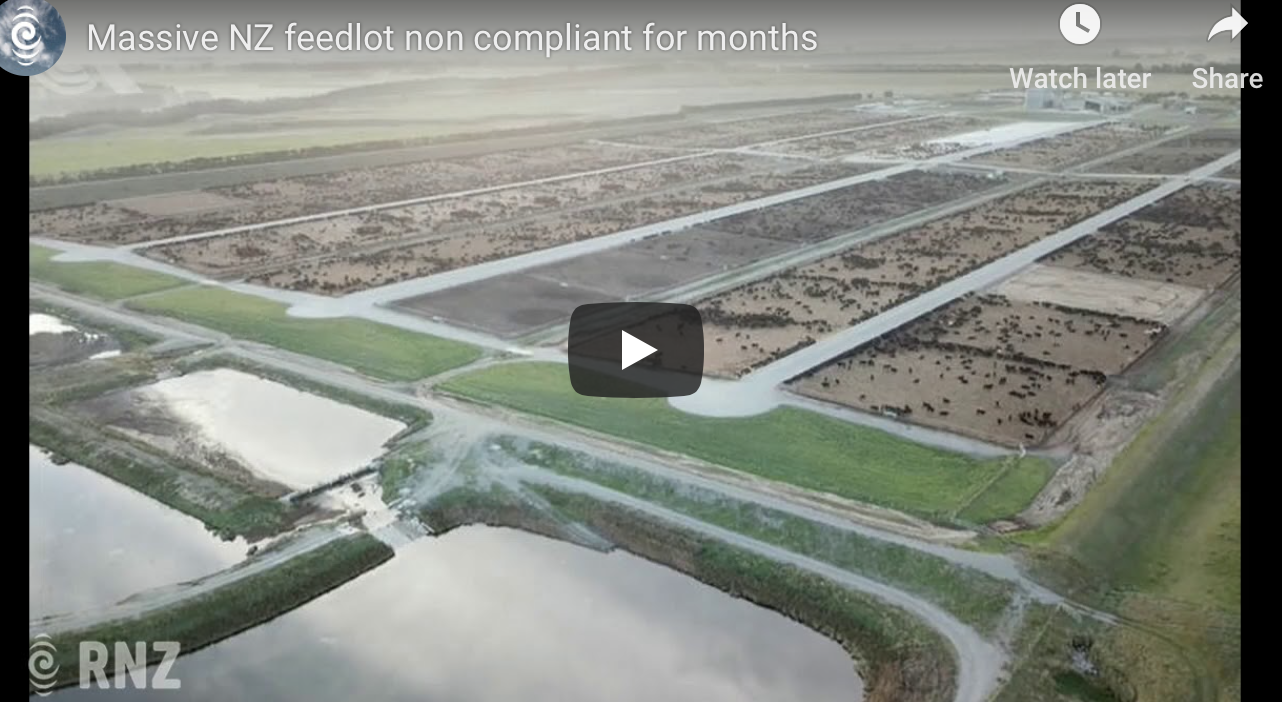 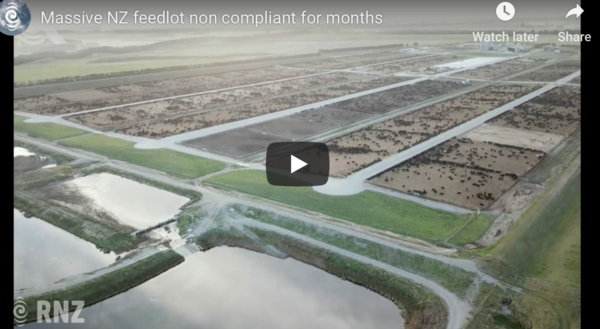 ECan became a monstrosity created by National that robbed people of real democratic say in Canterbury towards their environment so National’s farmer mates could molest the environment unimpeded.

We can see that corruption in the total destruction of the water quality since National made them a weapon for farmers to get what they want and the total incompetence of enforcing the weak regulations here are.

Controversial Christchurch water bottling plant under fire after label claims product is from 200m underground
A controversial water bottling plant in Christchurch is being asked to ‘please explain’ after leaked images of its product packaging claim its water comes 200 meters underground.
The problem is Cloud Ocean Water only has permission to take millions of water a day from a bore – which is just 33 metres deep.

…and this sickening monstrosity…

The Five Star Beef feedlot in Ashburton, owned by ANZCO, can farm up to 19,000 cattle on less than one square kilometre.

It has been there since 1991 and has been required to submit an report to Environment Canterbury (ECan) since at least 2005.

But its 2017 report was missing several key measures.

Ms Holland, despite having intimate knowledge of the feedlot’s consent, said she didn’t know why Five Star Beef had omitted the data.

…and while the corrupt ECan are being forced to reform by Labour, look at the way ECan are trying to manipulate things again…

In a scathing submission Greenpeace has labelled ECan’s new proposal for representation in the 2019 elections as “anti-democratic” and “grossly unbalanced.”

In 2010 the National Government sacked democratically elected Councillors at the Canterbury Regional Council (ECan) and replaced them with Government appointed commissioners.

The commissioners are now being removed by the Labour-led government in time for 2019’s regional council elections.

In preparation, ECan has proposed a representation structure that sets out the number of Councillors to be elected by people living in different areas of Canterbury.

“If ECan’s new plan goes ahead it would mean that the vote of a school teacher in Central Christchurch is worth 40% less than the vote of an irrigator in South Canterbury, “

The proposal suggests that South Canterbury will have a councillor to voter ratio of 1:30,600 and North Canterbury 1:37,900

“The proposal is so skewed towards giving more power to voters in rural canterbury than to voters in Christchurch that it actually breaches what is allowed under the Local Electoral Act.”

The proposal breaks what is known as the +/- 10% rule in the Act in four out of the seven proposed wards. As a result it must be treated as an appeal to the Act and referred to the Local Government Commission.

Greenpeace’s submission includes a litany of environmental crimes that the group says have gone hand in hand with the removal of democracy at ECan.

“Under the anti-democratic rule of nationally appointed commissioners ECan has given its consent to ecologically devastating irrigation and dairy conversion proposals” says Toop.

One of the examples given in Greenpeace’s submission is the consents granted without public notification by ECan for a mega-dairy farm just south of Lake Pukaki in the Mackenzie Basin.

Another example given is the revelation in 2016 that Canterbury irrigators were recorded taking hundreds of millions of litres of water above their entitlements. ECan issued few fines and there were no prosecutions. The vast majority were not punished at all.

“For the last eight years, without the consent of the people of Canterbury, ECan has relentlessly served the interests of the irrigation and dairy industries over the interests of clean, safe water and all those who rely on it,” says Toop.

“Canterbury is now in a freshwater crisis. A return to full and fair democracy at ECan is urgent and is a critical part of reigning in the dairy industry and cleaning up the region’s rivers.”

…ECan are scum and they are the enemies of the environment. Surely the time is now for this National Party mutation to be stamped out and the entire fiasco reset so that protecting the environment is the main issue and not giving polluters whatever they want.

It is time to stop sacrificing New Zealand’s future on the alter of dairy.