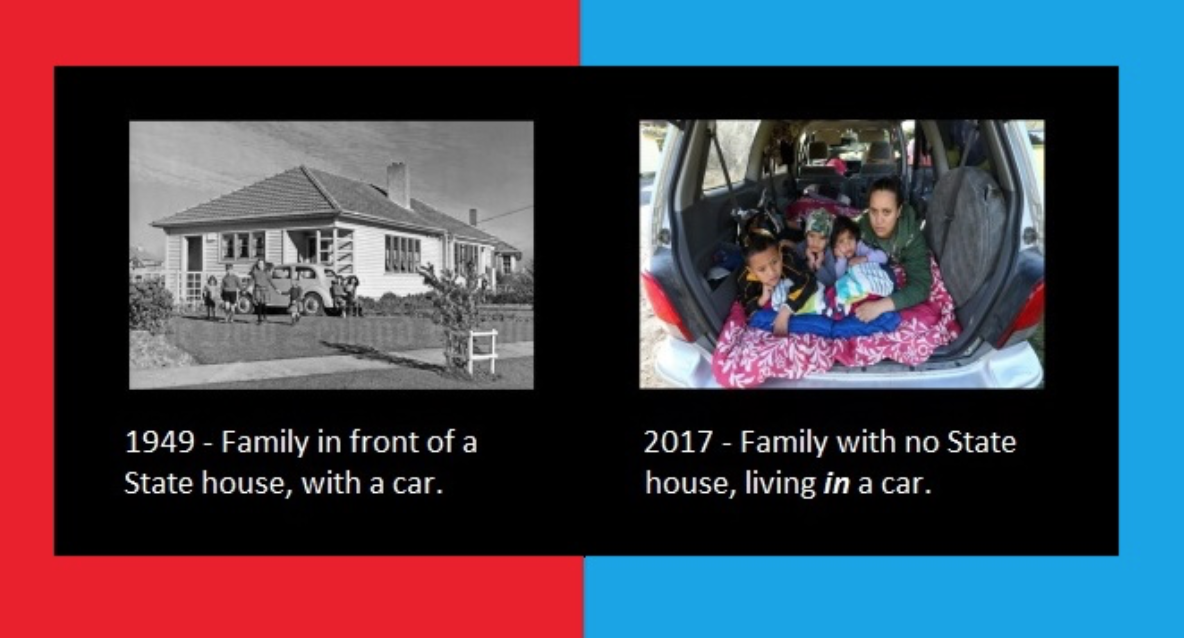 In a recent Ipsos Survey, 50% of respondants chose housing as the country’s most pressing problem facing New Zealand. (A similar question put to Australians yielded less than half – 24% – as being concerned about housing.)

Labour is also positioned 26 points ahead of National with regards to managing poverty-related issues in New Zealand (43% believing Labour to be better than National, at 17%)…

“The fact that housing is rated as the most important issue by 59% of New Zealanders who have an Income over $100,000, the highest importance rating across all income levels, demonstrates that housing is not just an issue for the poor. Addressing social issues has become more important to New Zealanders over the last 6 months, while the importance of factors such as the economy, unemployment, taxation and household debt have all reduced.”

Only 9% picked “the economy” as a trouble-spot. This appears in stark contrast to successive business confidence surveys which puts a more negative spin on the economy.

Some, like former Reserve Bank economist, Rodney Dickens, expressed skepticism about business confidence surveys. He “believes the survey has a major political bias. Basically business leaders are likely National Party supporters and this view biases them against the new Government more than any actual concrete business risk“.

“We know from media coverage that many New Zealanders are facing challenges relating to the housing market. Other issues such as poverty and healthcare have also been widely reported which is likely to increase New Zealanders’ awareness of these problems.”

Dr Griffiths made the insightful observation that social problems eventually touched more and more people and/or their families;

“As these problems continue to escalate, the likelihood of our respondents being personally affected by these issues will also have been growing.”

“[It’s] private developers doing stuff, they stop, Phil [Twyford] comes in, he pays them more with taxpayers’ subsidised money and then he sticks a stamp on it.

The previous National government – of which Mr Bridges was a senior cabinet minister oversaw a massive sell-off of Housing NZ houses.

Even former Prime Minister, John Key’s, one-time state house that he grew up in, was not to be spared privatisation;

No one could accuse National of being “overly sentimental” on such matters.

As state houses were sold to private owners, the surge in homelessness was predictable, forcing National to put homeless people – including entire families – in motels. National spent $8.8 million in just three months on motel accomodation for homeless – $100,000 per night.

Even senior/retiring “baby boomers” were feeling the effects of growing homelessness in New Zealand;

Barry Mills, chairman of supported living facility Abbeyfield Nelson, said they had to turn away two men, who looked to be in their 60s, in the last year.

He said in both cases they were single men from out of town, living out of their car with no place to call home.

“We couldn’t do anything for them because we didn’t have any rooms vacant.

“Even if we did have a vacancy, we probably still couldn’t take them because we have a process to go through and a waiting list.”

He said Abbeyfield in Stoke had 12 rooms and the one in Nelson 11, which were both full, with about 16 people on a waiting list ready to move in.

By February this year, a report authored by economist Shamubeel Eaqub;, University of Otago Professor of Public Health, Philippa Howden-Chapman,  and the Salvation Army’s Alan Johnson revealed that homeless was far worse in New Zealand than had previously been revealed.

The report referred to “a burgeoning “floating population” – people without safe and secure housing, including in temporary housing, sharing with another household, or living in uninhabitable places“.

National’s response had been to invest in the motel market;

The number of motel rooms purchased by National was a fraction of the 7,400 properties sold off from Housing NZ’s stock. It was a drop in the tsunami of homelessness sweeping the country.

Two ‘tweets’ in particular appear to have constituted spectacular own-goals from Ms Collin,

The article Ms Collins reposted in her ‘tweet’ referenced a Labour government led by the late Norman Kirk. It had been in power less than a year, following twelve years of National government.

The pattern is similar; a housing crisis after success National governments, followed by voters rejecting the lack of focus on social problems and electing Labour to clean up the mess. Judith Collins inadvertently reminded her followers of this fact.

But her next ‘tweet’ was not only an own-goal but a candid – if subconscious – admission how National views homelessness;

Her comment – “4. Are there alternatives to houses? Yes: cars, Motels, camping grounds, tents. Which would you choose?” – left some of her followers stunned and scrambling for a credible explanation. “Sarcasm” appeared to be their preferred excuse for the incredibly callous comment.

The Ipsos poll reflects the understanding of most New Zealanders that a fair, egalitarian, socially-inclusive country is not readily possible under a National government. That task is best undertaken by a left-leaning government.

For National, under-funding and cutting corners in core social services and privatisation is their number one priority.

Only when the consequences of their policies becomes to much for New Zealanders to stomach do they rebel at the ballot box and change tack by changing government.

Judith Collins’ ‘tweets’ and other public statements by her and other National MPs will ensure they remain in Opposition in 2020. They are not good stewards of our social services.

I doubt they even fully understand what our social services are for. Or the consequences of neglecting them.

But New Zealanders certainly do.

Mediaworks/Newshub: Homelessness on the rise in New Zealand

NZ Herald: Homeless crisis – 80 per cent to 90 per cent of homeless people turned away from emergency housing