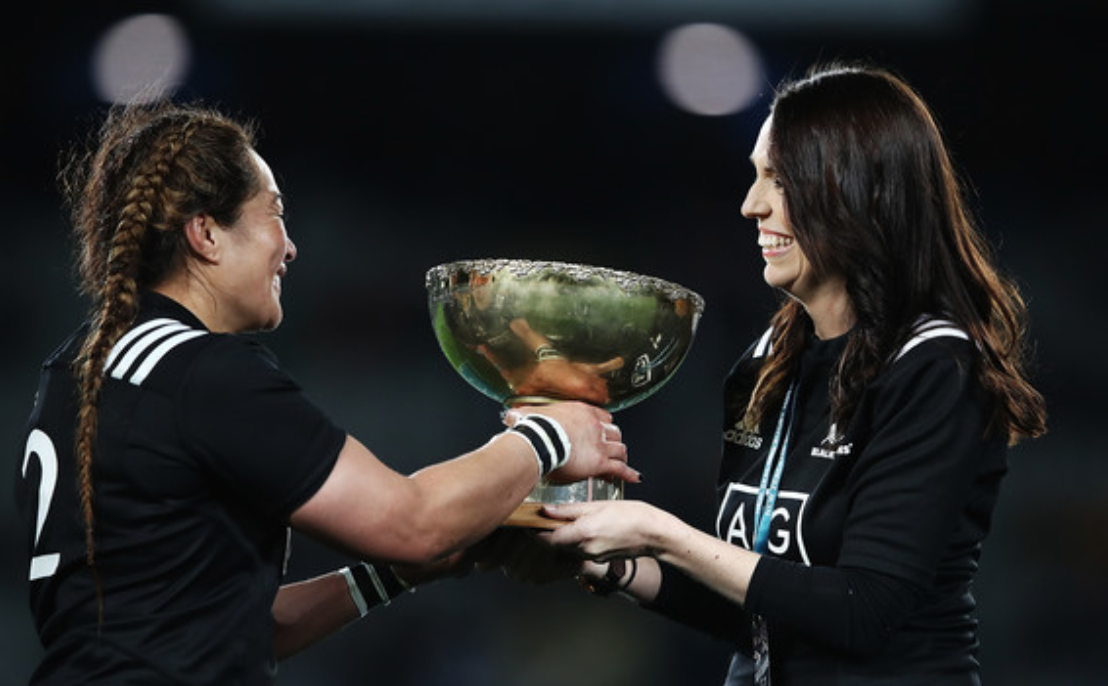 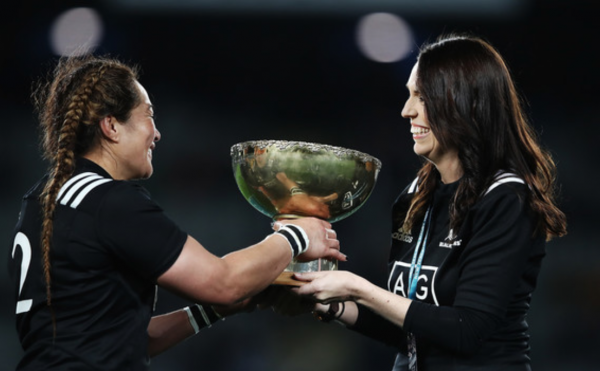 Women’s rugby has come a long way recently. For a few years now, there’s been increasing awareness and pride about the dominance of the Black Ferns on the international women’s rugby stage. But the word “stage” was barely a credible metaphor until last year’s Women’s Rugby World Cup, when finally the event was deemed serious enough for matches to be televised and mainstream media to pay more than passing attention. It was wonderful! Since then, there’s been further progress in the form of the increased profile given to this year’s Rugby World Cup Sevens win and the fantastic decision for trans-Tasman rugby fixtures to feature back-to-back men’s and women’s matches.

But, the Black Ferns are still a long way from being taken as seriously as the All Blacks. The women’s matches played over the past two weeks were very much seen as curtain raisers to the main (i.e. men’s) games and in the public eye, international women’s rugby fixtures probably still rank below the Mitre 10 Cup in terms of importance. I’m a guy who considers himself both a rugby fan and a feminist, but even I struggle to take women’s rugby too seriously because, to be completely honest, unlike the All Blacks, the Black Ferns don’t really matter. If they win, it’s great, but if they lose, oh well, never mind. Put simply, I like women’s rugby and I wish I was passionate about it, but the fact of the matter is, I’m not. So, how can we change that?

Before that, I totally get that a lot of feminist readers will be thinking that New Zealand’s All Blacks obsession is the actual problem and that the country would be better off if all New Zealanders were as unperturbed by the All Blacks’ losing as I am when the Black Ferns don’t win (not that I can remember that happening). You might be right and the emotional torment I endured between 1991 and 2011 often made me wish I cared less about the All Blacks. But, for better or worse, I’m a diehard fan and I’m shooting for a world of rugby gender equality where fans are just as devastated by a Black Ferns’ loss as an All Blacks’, rather than the two being treated with equal ambivalence. Feel free to disagree with me on that one, but I hope you can see where I’m coming from.

Advocates of rugby gender equality (and, indeed, other sports) focus a lot on salaries. For some, pay equity is an end in itself, whilst others argue that professionalizing women’s rugby will increase the quality, allowing it to be taken more seriously. Both arguments have merits, but if the overall goal is to make women’s rugby equal in the public eye, I doubt that salaries will make much difference. Fans don’t really care what people get paid. Neither do fans actually care much about the quality of rugby they watch. It’s pretty hard to argue that rugby was less popular and that fans were less passionate prior to 1996 when rugby was amateur and the quality of skills on display was far less than it is now.

Others argue that the media should give equal coverage. For sure, increased media attention can generate interest that wasn’t there previously and this helps the overall cause. But, today’s media is primarily interested in what sells here and now. Lip service to women’s sports is helpful to fill column inches on slow news days and to give the appearance of gender balance, but consistent live coverage of women’s rugby accompanied by hours of match analysis and page after page of newspaper articles (i.e. what the All Blacks get) is only ever going to happen if women’s rugby has legions of passionate supporters.

And you get fans by winning. Not just winning matches, but winning trophies. And not just winning any trophies, but winning trophies that matter. It’s not even the winning itself, but the prospect of winning, of competing for something that’s important – trophies. The Ranfurly Shield, the NPC (in the old days), Super Rugby, the Bledisloe Cup, the World Cup. Trophies are what count. Trophies are the difference between rugby being for fun and rugby being a matter of life and death. It’s all about the trophies.

And the simple problem for women’s rugby is that the men have all the important trophies and the women have none.

Now, in saying this, I don’t mean to disrespect our world champion Black Ferns who are an incredible group of athletes who play a highly attractive style of rugby. They worked damn hard to win yet another Rugby World Cup and I am very proud of them. But, let’s be honest, the importance of that trophy is nowhere close to the men’s equivalent. It’s not even as important as Super Rugby. In fact, in the overall scheme of things, the average rugby fan probably ranks the Mitre 10 Cup as more important than any women’s rugby trophy. The 2018 version was taken a lot more seriously, for sure, but I was personally shocked to learn (I looked it up whilst writing this blog) that 2018 was the women’s RWC’s eighth tournament. Eight! Just as many as the men! All Black fans reading this, tell me honestly, did you know that? I’m the kind of fan that can not only tell you how many men’s tournaments there have been, but where each one was held, who won and what the scores were, and yet I couldn’t even manage a close guess on a simple piece of women’s RWC trivia. Is that my fault? No! Is it because only care about men’s sports? No, and I’d challenge anyone to a netball trivia quiz to prove it! It’s because the women’s Rugby World Cup is not an important trophy!

The problem is that you can’t just create a trophy out of thin air. At least not one that people will take seriously. For a trophy to be truly coveted, it must have mystique, gravitas, a certain “je ne sais quoi”, which makes it an object of desire. This desire cannot simply be transferred to a women’s version of the same trophy. The women’s RWC experience has proved this, but even if the interest in the four-yearly women’s RWC continues to grow, the importance of the tournament will always be limited by how seriously rugby is taken the rest of the time. The women’s RWC will never achieve women’s rugby equality on its own. Women’s rugby needs importance every year and that means competing for trophies every year.

So, if we can’t just invent a women’s trophy, then there is only one solution. We let the women compete for the men’s trophies. Let’s start with the Bledisloe Cup. Yes, the actual same trophy, not a freshly moulded female equivalent. My idea is this: New Zealand and Australia compete for the Bledisloe Cup over a combination of men’s and women’s matches. Six games (three men’s, three women’s) with the Cup awarded to the country that finishes with the most combined points. It sounds simple, but the impact would be huge because, instantly, the women’s results would matter just as much as the men’s.

Fans would watch the Black Ferns with equal passion because watching the men thrash the Wallabies would no longer be enough. The Wallaroos (stupid name, by the way) now have to suffer too in order for the Bledisloe to be secured.

The media’s coverage would be immediately transformed. Not only would there be more live matches, but television pundits would chew over questions like, what lineout tactics do we expect from the Australian women? What really is the Black Ferns’ best midfield combination? If Portia Woodman is injured, who is there to replace her?  Fans would discuss these issues endlessly because the answers to those questions would matter to the outcome of an important trophy.

And the NZRU would have the incentive it currently lacks to take women’s rugby really seriously, investing in coaching, training facilities, warm-up fixtures and, yes, salaries. Not in order to achieve gender equality, but in order to win the trophy.

Looking further ahead, you could apply it to the Rugby Championship as well. More than enhancing gender equality, it would add a whole new dynamic into what is, let’s face it, kind of a dull competition. Imagine a final round scenario where the All Blacks must not only win their final match against, say, the Springboks, but the Black Ferns must also win their final match against Argentina, whilst at the same time relying on the Wallaroos beating South Africa. I’m almost breathless just thinking about. It could even one day lead to a joint Rugby World Cup with a single trophy shared by men and women. I’m not yet sure how that would work in a knock-out tournament, but I’m sure a solution can be found. It would be awesome!

Many will reject such ideas on the grounds of tradition, “it’s always been a men’s trophy, so we shouldn’t change it”. Get over it, I say, let’s move with the times and do thing differently. The Rugby World Cup itself was rejected by some traditionalists at the time and it’s now one of the most coveted trophies in sports.

So, to the boys in the New Zealand and Australian Rugby Unions, I say, what about it? Let’s prove that you’re not just a stuffy old male club and do something truly revolutionary. This idea is bound to catch on in other countries and other sports sooner or later, so why not seize your chance to go down in history as the first sport to make this change?