The architect of the Death Star, the moral Shepard of the Right and Head of Slytherin House , Matthew Hooton, knows when there’s blood in the water.

Not the blood of Nicky Hager who Hoots gave the address of to right wing toxin Cathy Odgers as she pondered having organised crime figures she provided legal loopholes for in China, to chop Hager up into little pieces… 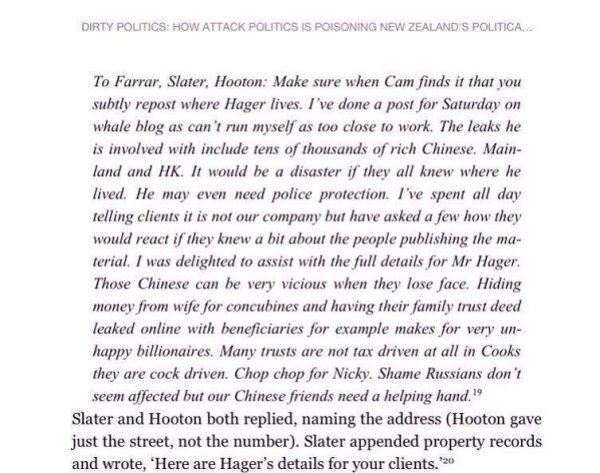 …oh no, not Nicky’s blood, Hoots can smell the blood of an economic hegemony in its last throws of influence.

As a Lord of the Sith whose homicidal devotion to right wing ultra free markets is masked by expensive face lotions and a charming turn of phrase on Radio NZ, Hoots knows crisis is the perfect time to hit with radical ideas that sound reasonable but are ultimately sociopathic.

Matthew’s lack of drinking means we don’t get to see the sociopath as much as we used to, but it’s there just beneath the surface of his carefully scrubbed pores.

His latest anti-Trump propoganda column has managed to stay on line longer than his defamatory attack on the ethics of David Parker, (possibly the only MP who makes Golriz Ghahraman look like a meat eating heteronormative cis-white car driving male nazi sympathiser) and to be honest, it’s a doozy…

Matthew Hooton: Markets undervalue Donald Trump risk
Trump’s several trade wars — which he says are “good, and easy to win” — have grievously harmed the post-World War II economic order, with early warnings they will also undermine the high-value end of the US economy.

Hoots knows when chaos is about to reign and is positioning his Consultancy for a great unravelling and with any new assault on the commons, the narrative needs to be cemented into place so we all know what we are fighting for, and apparently what the Hoots would have you believe, you’re fighting for the Godfather of Neoliberalism, Milton fucking Friedman.

In the short-run, the US economy is protected by Trump’s tax cuts but his trade policy is already shifting the US away from being the developer and owner of knowledge-based products, as Liddell advocated for New Zealand, towards being a supplier of subsidised commodities.

That’s a problem for the US. Far more dangerous is Trump’s attack on the global rules-based system launched by Harry Truman in the 1940s and advanced by Ronald Reagan and other 1980s visionaries.

Much is said about Trump’s withdrawal from the Trans-Pacific Partnership (TPP) and the UN’s corrupt Human Rights Council but infinitely more alarming are reports he has drafted legislation to effectively withdraw the US from the World Trade Organisation (WTO).

That would risk a contagion, collapsing the rules-based trading system and causing a full-scale global trade war.

Hoots correctly identifies the madness of Trump, but purposely misdiagnoses the problem and ends up suggesting a cure of more free market neoliberalism.

That neoliberal globalisation has gutted the working classes of developed nations doesn’t matter to Hoots, the concern is that they have seen the hypocrisy of a rigged casino they are destined to lose in and have elected a narcissistic fascist who won’t do what the corporations have paid for. Hoots suddenly fears the masses have seen through the Emperor’s clothes and screams at us in NZ to continue to applaud the trickle down threads and free market stitching of such sartorial finery.

The rules based economic order that Ronald Reagan corrupted and which Hoots believes is all that stands between us and Trumpian madness is a neoliberal fairytale that starts in October 1929.

At 1pm on October 24th 1929, the vice president of the New York Stock Exchange, Richard Whitney marched onto the stock exchange floor after a morning of devastating losses and purchased well over the sale price in front of everyone $20million dollars worth of US. Steel stock. He then went on to purchase General Electric, AT&T and other blue chip stocks spending $130million. His move funded by the wealthiest elites at the time was an attempt to insert confidence into a financial system on the verge of collapse. It worked. Until Monday 28th of October, four days later.

This attempted insertion of confidence by Whitney was misplaced and lacked macro economic foresight. Each panicked Government regulation response  brought about worse outcomes like the Smoot-Hawley Tariff Act, until eventually global world war was the economic circuit breaker. The market demanded cuts in costs and thought of labour as merely another supply and demand graph, the political fallout for abandoning people to that terrible equation however demanded a political response.

Roosevelt’s election in 1933 saw laissez faire replaced as the dominant economic management ideology with Keynesianism. Capitalism adapted to the legitimacy threat with a social welfare state and unprecedented reform within banking, employment, agriculture and industry.

The Bretton Woods conference was the reestablishment of  hegemonic stability with managed developmental capitalism at it’s heart before warping under Friedman & Reagan in the 80s into the neoliberal Washington Consensus.

This neoliberal Washington Consensus gutted the working classes of developed nations and transferred their jobs offshore in the ever diminishing returns of lower and lower labour costs.

The very same jobs that Hooton holds up in China as a success of this process are the jobs they work 20 hours a day for with suicide nets outside the buildings to stop workers from throwing themselves out of windows.

The solution to Trump isn’t as Hoots suggests, more free trade neoliberalism, because this will simply create those very same social frictions in NZ.

To understand Trump, you need to look at the people around him. They all believe that China is an existential threat to American hegemony and believe it’s either a trade war or hot war that will sort this issue of dominance out.

America doesn’t want to go to war with China, but Trump’s cavalcade of political circus freaks believe China is far weaker economically than the official figures suggest and that a trade war could implode China…

China: The US has started ‘the biggest trade war’ in history
China on Friday accused the United States of starting “the biggest trade war in economic history” as the two sides imposed steep new tariffs on tens of billions of dollars of each other’s exports.

…this trade war comes at the end of a super inflated decade of ‘growth’ that saw central banks print billions to prop up stock and bond markets to artificially create the lowest inflation rate for 5000 years.

That means this Trumpian  madness comes at the exact worst moment…

Risk of ‘brutal correction’ in global stock markets
France’s market watchdog is bracing for a surge in global bond yields and a Wall Street crash as soon as this year, fearing that contagion will spread to Europe and snuff out the fragile recovery.

The number one risk for 2018 is a brutal correction of stock prices. The current valuation levels look high both by historical standards, and in fundamental terms across a whole range of indicators, starting with American equities.

Any correction there would most likely spread to other stock markets,” it said.

…while Trump considers military intervention in the dagger to Antartica’s heart, South America…

Trump pressed aides on Venezuela invasion, US official says
As a meeting last August in the Oval Office to discuss sanctions on Venezuela was concluding, US President Donald Trump turned to his top aides and asked an unsettling question: With a fast unravelling Venezuela threatening regional security, why can’t America just simply invade the troubled country?

The suggestion stunned those present at the meeting, including US Secretary of State Rex Tillerson and national security adviser H R McMaster, both of whom have since left the administration. This account of the previously undisclosed conversation comes from a senior administration official familiar with what was said.

In an exchange that lasted around five minutes, McMaster and others took turns explaining to Trump how military action could backfire and risk losing hard-won support among Latin American governments to punish President Nicolas Maduro for taking Venezuela down the path of dictatorship, according to the official. The official spoke on the condition of anonymity because of the sensitive nature of the discussions.

From the normally mild summer climes of Ireland, Scotland and Canada to the scorching Middle East, numerous locations in the Northern Hemisphere have witnessed their hottest weather ever recorded over the past week.

Large areas of heat pressure or heat domes scattered around the hemisphere led to the sweltering temperatures.

No single record, in isolation, can be attributed to global warming. But collectively, these heat records are consistent with the kind of extremes we expect to see increase in a warming world.

…a threat even our own military are taking seriously…

‘Global warming is happening’: Defence adds climate change issues to its strategy for the first time

The response to the madness Trump is about to bring down upon us is not to embrace free markets and corporate rule, it’s to desperately identify a new type of economics to get us through what will become increasingly turbulent and damaging times.

Which is why Hoots is desperately resetting the narrative because when the shit hits the fan in NZ, what is Grant Robertson going to do?

My advice is call Winston Peters.

Originally Labour Party mandarins in Wellington didn’t want to form a Government with NZ First because Winston’s economic agenda was far too radical for the neoliberal Treasury goons to accept. Grant was one of those voices inside the negotiations that ensured a deal with Winston was made.

The tight rope Grant will walk is the demands of a country that is in desperate need of investment after 9 years of brutal National rule against a huge swath of the public who are mortgaged up their eyeballs because of property speculation and dairy intensification with a looming economic collapse.

One of the things that the new Government are convinced of is that there will be a global economic recession unlike anything we’ve seen before. Winston’s words on the failure of capitalism on the night he went with Labour weren’t rhetoric, they were belief.

Grant will need to step outside the straight jacket he was forced to wear the moment the collapse begins. If the new Government are seen to be reacting to an external shock and not provoking it, the new Government can dump its financial rules and react to the crisis without getting blamed by voters for it.

Who will the Government save? First time home owners? Dairy Farmers? Beneficiaries?

Hoots will be there to argue that we need to bail out his rich mates who bravely charter the mighty waves of neoliberalism.

We shouldn’t let him.