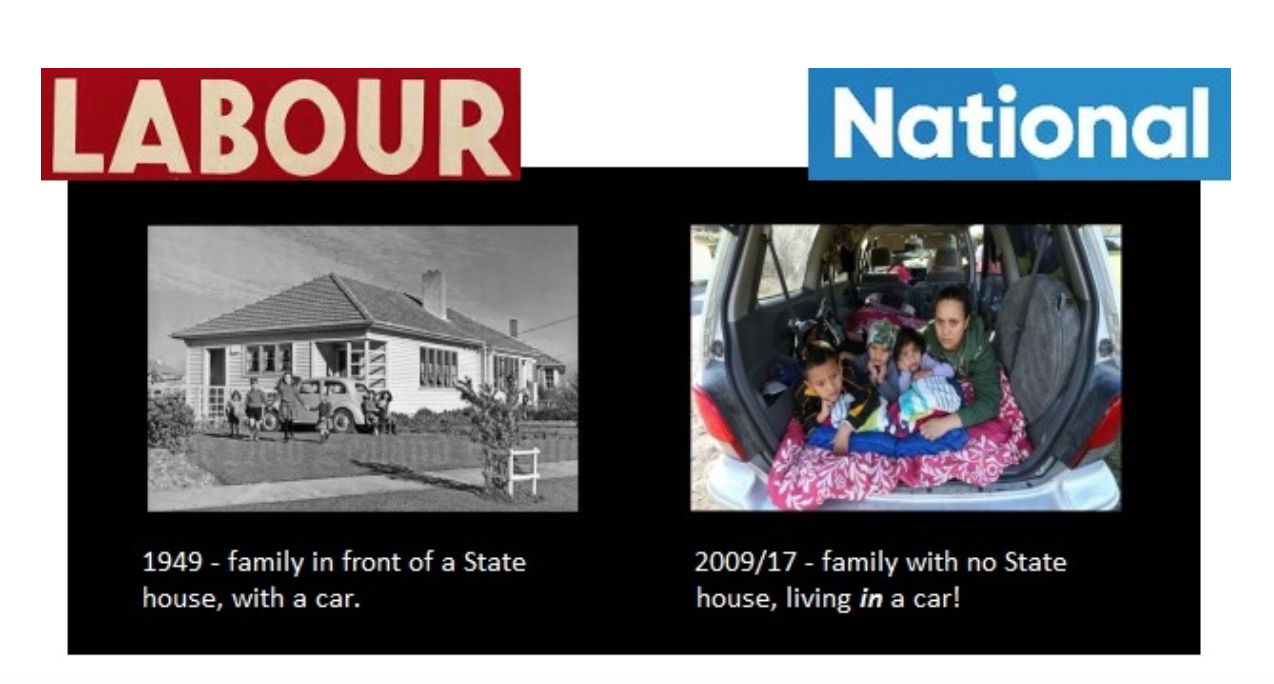 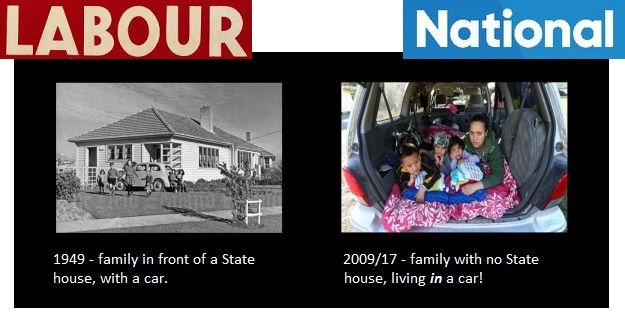 On 8 June, Coalition government minister, Phil Twyford announced the formation of a new Ministry of Housing and Urban Development. In a media statement, Minister Twyford said;

“Addressing the national housing crisis is one of the biggest challenges our Government faces. The new Ministry will provide the focus and capability in the public service to deliver our reform agenda,” Phil Twyford said.

Too many New Zealanders are hurting because of their housing situation. Many are locked out of the Kiwi dream of home ownership. Others are homeless or suffering the health effects of poor-quality housing.

The new Ministry will be the Government’s lead advisor on housing and urban development. It will provide across-the-board advice on housing issues, including responding to homelessness, ensuring affordable, warm, safe and dry rental housing in the private and public market, and the appropriate support for first home buyers.

The Ministry will be set up by moving functions across from existing agencies, and look at utilising funding from their existing operational budgets.”

The new Ministry would have a small budget of $8 million and employ around two hundred people from existing agencies;

Unfortunately, it does not appear that the new Ministry will be a re-creation of the former Ministry of Works and Development. The now-defunct MoWD was a hands-on government body that actually built much of the infrastructure that New Zealanders now take for granted, and which small government neo-liberalists conveniently ignore.

Amongst it’s many projects were;

By contrast, free enterprise – often touted as more efficient that state-owned enterprises – finds it difficult to build water-tight houses; keep up with housing demand; or even build a hotel.

The Ministry of Works and Development was split up into a consultancy group  (Works Consultancy Services) and civil construction (Works Civil Construction) and  privatised in November 1996 by the National government at the time.

National – which denied the existence of a housing crisis until it was forced to earlier this year – responded to Minister Twyford’s announcement with a jaw-dropping, eyebrow-raising statement of  naked hypocrisy.

“We’ve got a minister who’s desperate to look like he’s doing something. A new logo, and a new ministry is not going to build one more new house.”

Which is ironic, to say the least.

According to Budget 2013, the cost of Establishment of the Ministry of Business, Innovation and Employment was $119,993,000 – or $111,993,000 more than Minister Twyford’s $8 million Ministry of Housing and Urban Development.

When it comes to establishing new Ministeries, National goes for the deluxe, no-expense spared model.

This included a few optional extras;

Despite throwing  $119,993,000 of taxpayers’ money at the new “super ministry”, a December 2014 report by the State Services Commission was damning of it’s inefficiencies and poor performance.  Jamie Tahana from Radio NZ summed up the report;

But quietly published on the State Services Commission website last Tuesday, was a 65-page report completed in February that said the ministry had significant and external problems.

Out of 32 areas of review, the report highlighted 22 that needed development, and five that were weak.

Only five areas were considered well placed for future performance, and none achieved the top rating of strong.

Aspects that needed development ranged from leading economic growth – the core reason MBIE was established – to engagement with ministers.

This was the same MoBie that – according to the SSC report – was tasked with;

… tackling housing affordability and social housing reform, including through the Housing Accords and special Housing Areas, particularly in Auckland.

Even while the National government at the time stubbornly refusing to acknowledge the gravity of the housing housing confronting the country, the SSC report was matter-of-factly pointing it out to anyone who cared to read the document;

It is estimated that 20,000 to 23,000 new houses are required across the country over the next five years to keep pace with demographic changes. The current level of new housing construction is 17,000 per year.

As far back as 2014, the State Services Commission was ringing alarm bells.

Unsurprisingly, it pointed out  that “the housing and construction sector is the lowest productivity sector in New Zealand, while also being a major determinant of growth in the economy”.

$119,993,000 spent on a new super-ministry that was failing to meet the challenges of a shortage of housing – and Judith Collins has the colossal cheek to complain of an eight million dollar investment in a new Ministry of Housing and Urban Development?

Playing politics with social issues is nothing new. National has perfected the art with it’s “tough on crime” rhetoric. It has also demonised solo-mothers; the unemployed; young people, and Housing NZ tenants with it’s meth-testing/contamination moral-panic.

It is clear that Ms Collins’ fear is not that the new Ministry will fail. She is frightened it will succeed.

Playing politics with poverty-stricken homeless families and middle class young New Zealanders unable to afford their own homes is gutter-level politics. It reminds us yet again of the depths to which some politicians will go to claw victory as the expense of others.

For outstanding hypocrisy in criticising an eight million dollar new Ministry devoted to solving our housing crisis, whilst National did only the absolute minimum for nine years, including squandering $119,993,000 on a super-ministry that hoovered up cash even as Kiwi families lived and slept in cars, Ms Judith Collins is awarded the Paula Bennett Certificate of Hypocrisy. 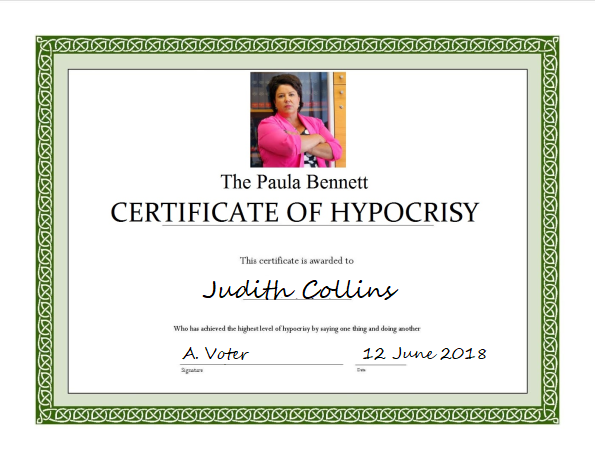 Wikipedia: Ministry of Works and Development

Fairfax media: Housing ministry to advise on house prices and homelessness will be ‘frugal’

Treasury: Income from State Asset Sales as at May 2014

Radio NZ: New National leader says there is a housing crisis in NZ

Beehive: MBIE to proceed from 1 July

State Services Commission: Review of the Ministry of Business, Innovation and Employment (MBIE)

NZ Herald: National, Act to get tough on violent crime

The Standard: Key finally admits there is a housing crisis but says it is all Labour’s fault

The “free” market can’t even build a bloody hotel?! 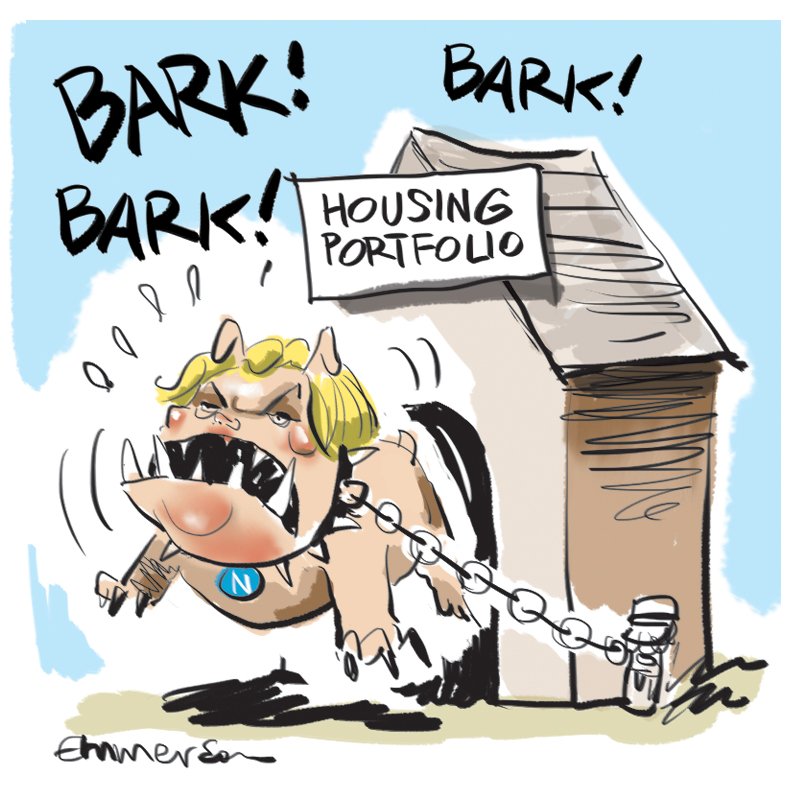