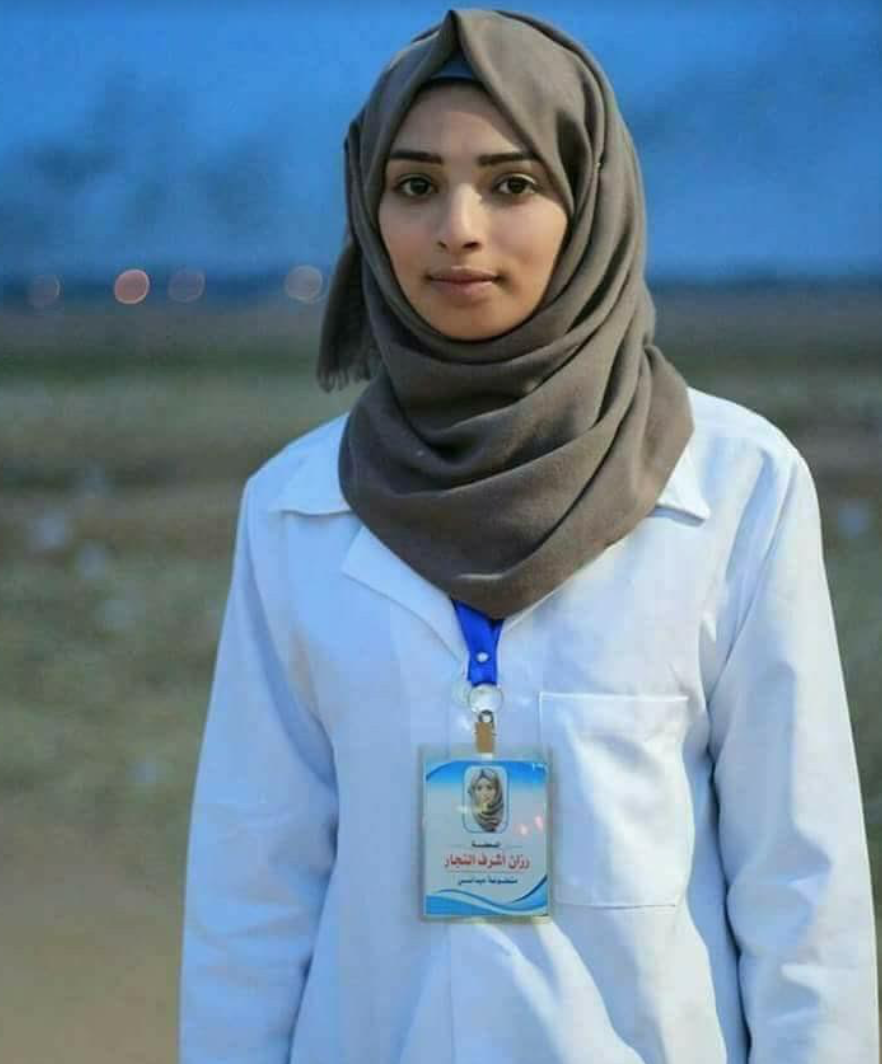 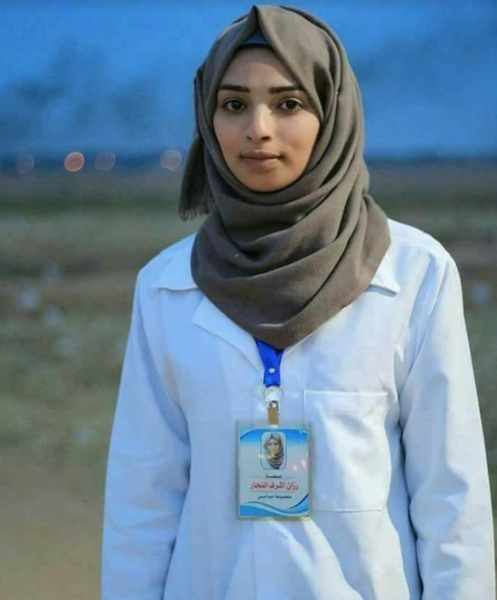 On 01 June   Israeli snipers shot and killed Razan al-Najjar, a 21-year-old volunteer paramedic in Gaza. She was wearing a white medical coat , and was  tending wounded protestors when she was shot.  She and other paramedics had approached the wounded, with their hands in the air.

What motivated  Razan to be a first responder instead of waiting back in a tent for victims to be bought to her by male paramedics? She had told interviewers that she wanted to prove that being a first responder was a woman’s job too, and that her father was proud of her.

She told interviewers last month, “We have one goal, to save lives and evacuate people. And to send a message to the world: Without weapons, we can do anything.”

Razan al Najjar lived in a farming village east of Khan Younis, in the southern Gaza Strip. Her father had a shop that sold motorcycle parts, which was destroyed in an Israeli air strike during the 2014 bombings.He has since been unemployed.

The eldest of six children, Razan did not score well enough in her high school exams to attend university, so instead she chose to train for two years at a hospital in Khan Younis, as a paramedic. She then volunteered with the Palestinian Medical Relief Society.

Her father reports that his daughter rose before dawn on Friday June 01, to eat and pray before the start of the daily, sunrise-to-sunset Ramadan fast.

That was the last time he saw her.

KiaOraGaza has a link to an interview with her.

Can you imagine the reaction of the West’s media and Western Governments,   if, God forbid, a missile, rock, whatever, launched, or thrown by a Palestinian, any Palestinian, maybe a ‘lonewolf’, anywhere, killed a young Israeli volunteer nurse giving aid?

Why does the West continue to turn a blind eye to Israel’s blatant contempt for international law..to  Israel’s oppression of Palestinians  which Noam Chomsky describes as sadistic?

Every world leader who looks the other way is complicit. At least NZ is not selling weapons to Israel, like the Americans and British are.

But unless our Government shows real anger and expels the Israeli Embassy, then  New Zealand is complicit too.

So here is an open question to the Government. How many Palestinians would have to be slaughtered before the Government would follow the example of South Africa and shut down the Israeli  Embassy ?

How many children?  How many journalists holding cameras and wearing jackets marked PRESS? How many paramedics?

Is there a Red Line?

And why is it impossible to get the world’s powerful, including the media they control, to even consider that maybe …

Philippines uni with biggest journalism school backs ABS-CBN amid threats
Labor’s climate policy too little, too late – we must run faster to win the race
Eight dead following big PNG jailbreak near Mt Hagen – manhunt, shootouts
Climate change research aims to give back Pacific’s ‘sustainable voice’
Indonesia reviews Papua special funds – why $7.4bn since 2002 hasn’t helped
Inquiry probing 55 matters relating to special forces’ alleged misconduct in Afghanistan
Government backs Labor call for Bettina Arndt to lose Order of Australia award
If you’re ageing and on medication, it might be time to re-assess your alcohol intake
Weinstein conviction a partial victory for #MeToo, but must not overshadow work still to be done
After damning report into Dreamworld tragedy, who can be held accountable under the law?