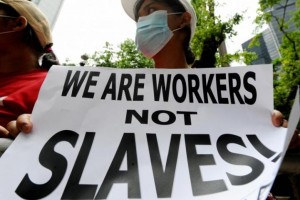 When  Smith City was ordered to back pay the workers it had been ripping off for 6 years for all unpaid staff meetings, it didn’t take three witches or a crystal ball to know that the flood gates would open. They have. At First Union along with over 1500 people responding to a survey, the call centre and organisers are all being contacted with people wanting to lament all the unpaid hours or the time off never taken in lieu. As the National Organiser for The Warehouse and Cotton On I have received more than my share.

The list of employers named and shamed is growing daily. It seems it is a rare employer that does not try and squeeze as much extra time out of the employees as possible. Our naughty list includes Cotton On, The Warehouse Group ( all brands) Whitchoulls, Hannahs.Glassons and a cast of many more household names. What is new is the workers finally speaking out. It is a revolt of the retail masses and it is both overdue and welcome.

When you work in retail  there are 100 different ways an unscrupulous employer can take advantage of you. What seems to puzzle people is why employees continue to do the hours. It is the discourse that pervades the Stuff comments section.

“Why don’t they just find another job?’  asks SelfmadeKiwiLickedRoadCleanAndHardenUp

My immediate response is “Because they can’t arsehole,” but then I sound as puerile as AnonOldGuyWhoIsntRaisingKidsOnHisOwn

The truth is about the invisible spell that is cast when one person holds all the power over another other.

Most of the complaints I have received by Facebook messenger late in the evening are from the young workers in the fast fashion mall stores. They don’t know their rights, even when they do they are at the mercy of a precarious contract. For example the Cotton On Group, which includes Cotton On Body, Cotton On, Cotton Kids, Typo, Ruby and Supre are all employed on a 3 hour contract. That’s it. Only 3 permanent hours. So if you are a permanent part time worker, who aspires to more security than $50 before tax, the last thing you are going to do is complain. Complaining won’t get you more shifts.

The companies have pretty much passed the buck down from their highly paid padded chairs to middle management. They are blaming individual rogue store managers who aren’t following process. Let me add some context about ‘management’. Cotton On the store managers might just be a worker that survived a season as a Christmas casual, was lucky enough to get kept on as a 3 hour permanent part time, after two years was called a senior part time ( still on 3 hours) and then promised their firstborn in order to get a promotion to assistant store manager or store manager. The average age of the store managers is well under 30. By this stage there have been a lot of unpaid hours.

For the company to blame store managers is ridiculous. A store manager messaged last night saying they were feeling targeted. They then went on to explain that there used to be half an hour to close, but then it was reduced to 15 mins and that the number of staff in each store had been reduced and finally, the regional mangers wouldn’t approve the overtime entered on the time sheets and it would disappear to meet budget. As if by magic.

Do I have to do this over? Do I have to point out that a regional manager is just a store manager that having survived 3 culls, managed to make the jump up another rung. All of this is dictated by one thing. Profit. The hours allotted to a store are dictated by turnover. It has nothing to do with the ability of the team to take a break or finish the work. As one store manager said last night ‘ I was always taught that staying late was time management issue, not a pay issue.’

So in answer to the question of why don’t they chuck it in and leave, what would be the point if all the chains are behaving the same way? None of this is new to First Union. What is new is the chance for a collective of workers to complain simultaneously, be heard and hopefully with the combined incantation of many voices, we can cast a spell for change.