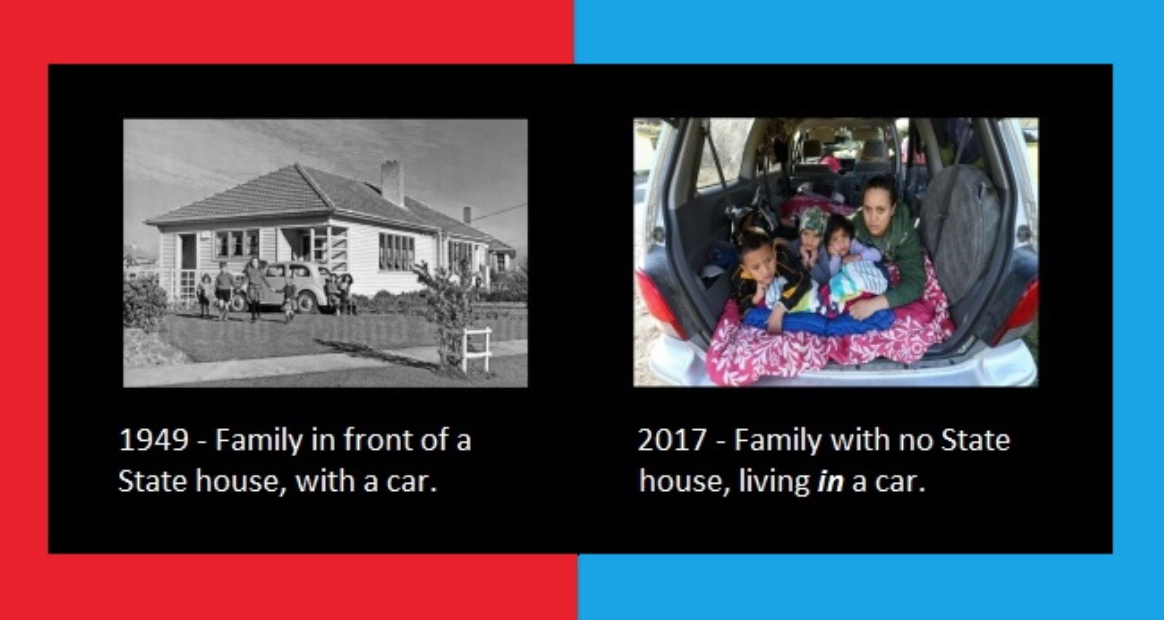 Soon after criticising the Coalition for “hiding debt in SOEs” – a capital offense that National was guilty of in 2009, and which contributed to  bankrupting Solid Energy by 2015 – National Party’s finance spokesperson, Amy Adams, was at it again.

This time, Ms Adams was making claims on housing that official figures could not sustain. Her talking-up of National’s so-called “achievements” in social housing collapsed when exposed to scrutiny.

Appearing on TVNZ’s Q+A on 20 May, Ms Adams’ criticisms of the Coalition government were rigorously  challenged by a bemused Corin Dann. At every opportunity she took to attacking the Coalition, Corin Dann was able to turn the criticism back on National.

When Ms Adams asserted that;

“Even Treasury is saying that the GDP growth that they’re forecasting is only held up because of strong and, in fact, growing immigration numbers…”

Ms Adams became increasingly defensive. Instead of holding the current Coalition government to account, it rapidly became a cross-examination of National’s own track record whilst in government.

At one point, Ms Adams asserted;

” Just take state housing for example — we promised 2000 new houses a year, so 6000 over three years. This government is now committing to deliver less than they promised and only 1600 a year. “

If National had been re-elected last year; and if those six thousand new State houses had been built – it would have made little appreciable difference to homelessness in New Zealand.

Meanwhile, waiting lists for state homes have rapidly ballooned as the scourge of homelessness worsened under National.

(NOTE: There were additional categories – “C” and “D” – considered less urgent by Housing NZ. These two categories were removed from Housing NZ’s books after July 2011.)

Indeed, had National not disposed/sold/transferred 6,000 state houses and had they proceeded to build an additional 6,000 as Ms Adams asserted on Q+A, they could well have put a serious dent into homelessness, over-crowding, and living in sub-standard hovels in this country.

Instead, homelessness has worsened to an extent where National was forced – reluctantly – to even concede that there was a crisis. National went from this last year;

Unfortunately, National’s election policy on Housing offered scant information how they intended to resolve this crisis. Tellingly, their policy document referred to “social housing” once – and then only very briefly;

Freeing up Crown Land to see 34,000 more affordable, market and social houses built over the next ten years.

There is no reference to state housing.

Despite a NZ Herald report in July 2016;

In the past financial year, HNZ built or bought 871 state houses.

Its rate of construction will now be ramped up to around 1300 state houses this financial year, 1500 the following year, and around 2000 the year after.

– there appears to have been very little movement in increasing Housing NZ’s stock.

The same Herald story reported that;

Over the next two years, Housing New Zealand will also build another 800 affordable houses to be sold on the open market.

Ms Adams may have based her claim of  “2000 new houses a year, so 6000 over three years” on that Herald story. But Housing NZ’s own Annual Reports do not back up her numbers.

Once again, National’s spokespeople have been caught out embellishing the truth at best – or – telling deliberate fibs at worst. (A third option is that Ms Adams was simply making-up-policy-on-the-hoof.)

One thing is clear. Under a re-elected National government, this;

– would have become this;

Housing NZ: Briefing for the Minister of Housing – December 2011

Radio NZ: New National leader says there is a housing crisis in NZ

The Standard:  There is no housing crisis in New Zealand