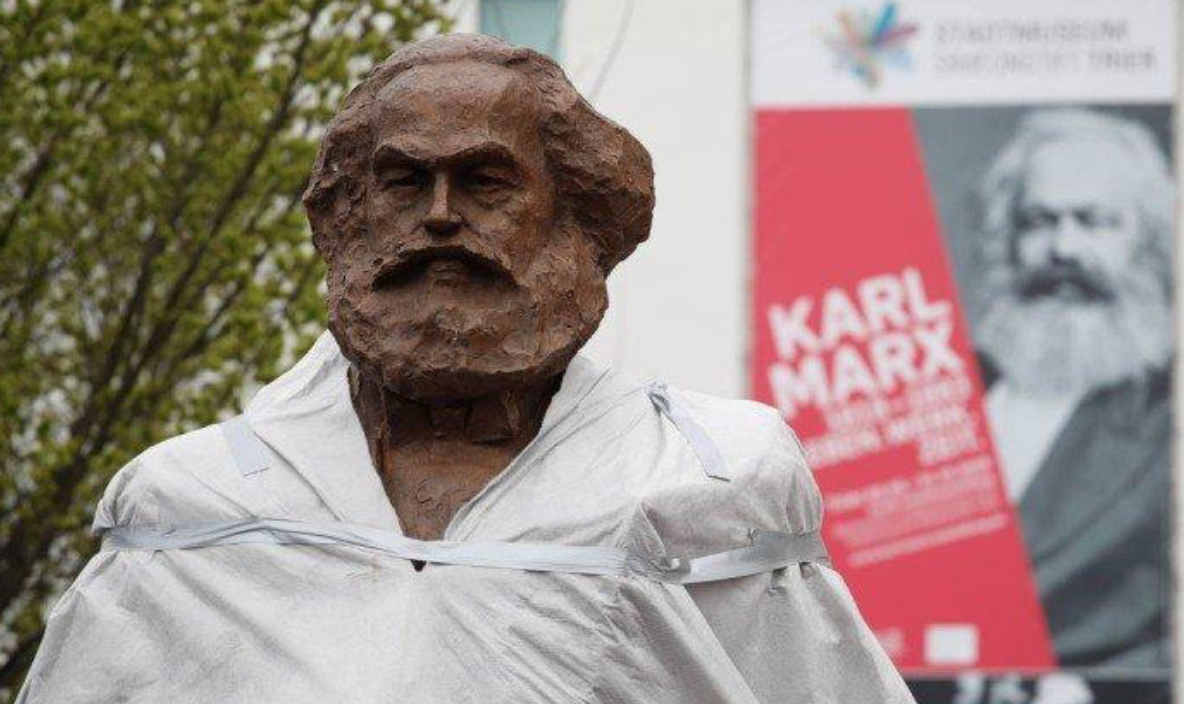 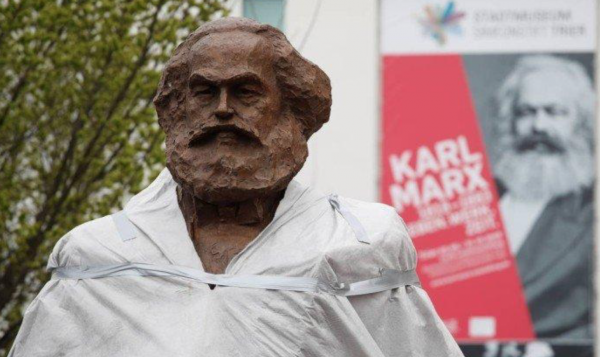 “I am not a Marxist”

A famous dead white man indulges us by coming back from the grave on his 200th birthday for a bit of celebrity haunting. Why? Should we be impressed when the interest in Marx is on the rise among academics, students and journalists? Not only in the liberal bourgeois press such as the Guardian, [1] or The Daily Blog, [2] in myriad ‘left’ journals, like Jacobin, [3] but also in the US colleges where The Communist Manifesto [4] is the most read book in college libraries. Not only that the ruling Chinese Communist Party has held an official celebration and funded a statue of Marx erected in Trier, Germany, his home town, upsetting some of the locals. [5]

Yet if Marx was alive today I don’t doubt that he would react much as he did shortly before his death in 1883. “Just as Marx used to say, commenting on the French “Marxists” of the late [18]70s: “All I know is that I am not a Marxist.”” [6] This rebuff was the last of many times that Marx castigated various “self-proclaimed” Marxists for misrepresenting his ideas in their attempts to ‘improve’ or ‘update’ them. Let’s see why Marx found this necessary. But to do that we have to reclaim Marx from the grave robbers.

Any evaluation of Marx cannot be left to the superficial idea that “Marx was right” without setting out what it means to be “right”. It means knowing how he used the scientific method to understand capitalism and how he applied this knowledge in a program for revolutionary communism. His dispute with the French ‘Marxists’ in 1883 was over their practical demand for wage increases, without making it clear that the struggle for higher wages must lead to the overthrow of the wage-system itself. Class struggle was not about adjusting to capitalist exploitation but developing the class consciousness needed to overthrow capitalism and arrive at communism. But how do we decide who was right on this and other questions?

To know who was, and is right today, the evaluation of Marx 200 years after his birth needs to be based on how well his ideas have been tested in practice and proven correct or not, rather than the ideas of ‘self-proclaimed’ Marxists, no matter how well intentioned. Here I am not dealing with anti-communists, hostile to Marxism. We can leave the aversion to Marx of people like Ana Stankovic to stew in its own juice. [7]

We should also make passing reference to life President Xi Jinping whose celebration of Marx is grotesquely contradicted by ‘socialist’ China’s restoration of capitalism and rapid rise as the world’s second biggest economy and chief rival of US imperialism. Such blatant caricatures of Marxism are so grotesque as to be already headed for the dustbin of history. [8]

More dangerous is the social/liberal left that pays its respects to Marx’s life work only to disarm him and inoculate workers against his revolutionary message. But most dangerous are the self-proclaimed Marxists or all shades, Stalinist, Maoist and fake Trotskyist, who drag his name in the mud rendering him a common liberal. How do we decide between Marx and anti-Marx? One example: the Anti-Capitalist blog does a good job deconstructing Yanis Varoufakis Introduction to a new issue of the Communist Manifesto which covers Marx with faint praise while trying to bury him -Yanis to Karl, with love. [9]

Marx considered himself to be a scientist whose critical ideas had to be put into practice by the class struggle to test and develop them. It was the class struggle that would prove his, rather than his political rivals and opponents, right or wrong. Remember the 11th thesis of the Theses of Feuerbach: “The philosophers have only interpreted the world… the point, however, is to change it.” [10]

The first major test of Marx’s program came in 1871 with the Paris Commune when the working people of Paris rose up against the bourgeois government after the defeat of the Emperor Louis Bonaparte (Napoleon’s great-nephew) by the Prussians. Already by that time Marx was convinced that the proletariat has succeeded the bourgeoisie as the revolutionary class.  The failure of the 1848 attempts by European bourgeois classes to make their “French” revolution against their ‘ancient regimes’ collapsed in embarrassing deals with the feudal ruling classes. [12]

This default on the part of the European bourgeoisie left the proletariat with the responsibility for completing the task of developing the forces of production in the name of socialism. For the first time Marx spoke of ‘the permanent revolution’ signifying that the proletariat had to step onto the stage of history and take over the task of the reactional bourgeoisie of completing the bourgeois revolution and creating the conditions for socialism. But how to do this: reform or revolution? It was the Paris Commune of 1871 that put the Marxist program and the various reformist programs to the test with a bloody ruling class vengeance. [13]

The lessons of the Commune were clear. First, disproving the reformists it was proof that the bourgeois state had to be overthrown by proletarian armed force or it would physically wipe out all working-class opposition. Second, disproving the anarchists, the overthrow of the bourgeois state had to be replaced by an armed workers’ state to defend the revolution. The Marxist program was amended in the light of these lessons but the defeat of the Commune ushered in a period of capitalist reaction. The First international collapsed after bitter in-fighting with Bukharin and the anarchists. And Marx had to fight the retreat of ‘Marxists’ back to reformism, most notably at Gotha in Germany in 1875. [14]

Marx’s “Critique of the Gotha Program” was an angry attack on those who followed Lassalle’s “falsification” of the Communist Manifesto. But it was largely futile and the Marxist party was only revived when the Second International was founded in 1889. Engels carried forward the defence of the program until his death in 1895. Then the task of defending and developing the program became that of the next generation of Marxists – in particular, Kautsky, Lenin, Luxemburg and Trotsky to name the most important. We can judge whether Marx would have disavowed or accepted these new leaders as worthy of real Marxism starting with their position on the lessons of the Commune, and then what they did to apply the theory and practice of Marxism in the 20th century. [15]

[13] Marx on The Paris Commune https://www.marxists.org/archive/marx/works/1871/civil-war-france/ch05.htm