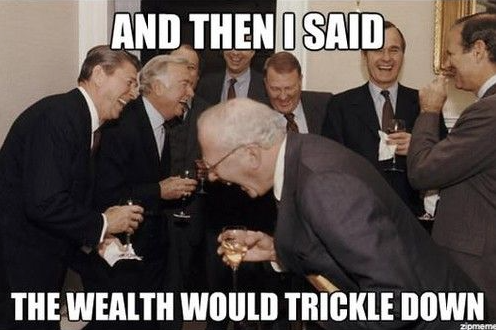 Taxation has very much been in the limelight in recent weeks. We have the seen the government chastised for a plan to implement increased taxes on fuel by around 10c per litre over the next few years. There has been the constant spectre of the Tax Working Group hanging over us, and over the weekend, the appointment of Marama Davidson as Co-leader of the Greens gave rise to the discussion of new and higher taxes, including higher income tax, for which she is a supporter.

The most prominent of these currently is the regressive fuel tax, put in place to fund road safety improvements and rail infrastructure. The burden of this tax will be placed on poorer folk, many of whom have already been driven out of the central cities by exorbitant rental prices.

It’s another nail for the ever-increasing number of working poor in New Zealand, and a further example of the scattergun approach we have taken to taxation and fiscal policy over the last few decades in order to shore up the widening cracks appearing in our infrastructure, health sector and social security systems.

One of the cornerstones of an economically (allocative and productive) efficient tax regime is neutrality. If a tax system is not neutral, it will drive a misallocation of capital, which will ultimately benefit some, but leave the economy as a whole worse off (known as dead weight loss). This is exactly what is occurring under the current system in New Zealand and has been growing now for decades. Many have benefited handsomely from the distortion, which sees owner occupied and rental housing taxed at a fraction of what we tax other forms of income. For all those who have benefited from pouring capital into the housing market, the cost has been an economy starved of the productive capital required to stimulate wage growth. Together with massively inflated house prices and historically high levels of private debt this results in increasing numbers of households struggling to avoid being on the wrong side of the yawning inequality gap. For the everyday Kiwi the most obvious outcome is that house prices and rents are rising year on year, significantly faster than wages.

One does not need to look hard to see who has benefited most from our distorted tax regime. The large group of New Zealanders now approaching retirement made the proverbial hay, and now control a staggering amount of our country’s wealth. No one can blame them, they were simply doing what the system allowed. The blame lies squarely at the feet of successive governments who’s myopic thinking and inaction over the last 30 years has left a new generation predicted to be the first in history to be worse off than their parents.

Unfortunately, there’s no respite in sight. Due to our refusal as a nation to acknowledge the problem, the cards are still heavily stacked in favor of those already with wealth. And if you want to get aboard this gravy train all you need to do is secure some starting capital in the first place. Unfortunately, this is not quite so simple if you are one of the 40% of New Zealanders who own nothing. By definition, this group is made up mostly of wage earners who are at the coal face, squeezed by stagnant wages and rising housing costs. These are our society’s suckers. We say ‘suckers’ because their vote is worth the same as the next persons, but it appears beyond them to help themselves.

To make matters worse, this group of wealthy New Zealanders who are heading rapidly towards retirement will put even more pressure on our social systems. As our population ages, expenditure will increase to accommodate rising healthcare and superannuation costs, while revenue will decrease as more and more income earners retire and are not replaced. The long term fiscal position does not make for pretty reading. Treasury is predicting that the bill for NZ Super will rise from around 5c in every dollar we earn to around 7c in 2040, and 8c by 2060. Meanwhile health spending is predicted to increase to around 10c by 2060 (it is currently around 6c). The Future of Tax working group background paper released last month predicted we will open up a year-on-year deficit of 4% of GDP by 2045. (If this does not seem like a great deal, the much-vaunted government surplus we are currently running is around half of one percent of GDP).

With all this considered, we are left with a very perverse situation. Those lucky enough to live through (and continue to reap benefit) from a golden era of opportunity will still expect to be propped up by the very people whom are left to deal with the consequences of their wealth-gathering. Under the current situation, future generations of renters and wage earners will be faced with massive income tax hikes so their landlords can be paid a Superannuation cheque and have their hip replacements covered. “Heaven forbid I should pay tax on my multimillion dollar house, I worked hard all my life for this. Johnny is young and fit, let’s take a half of his wage instead.”

The problem is, any attempts at reform are stuck in first gear, and It’s easy (and exceedingly frustrating) to see why; young people don’t vote, old people do. Political parties know this, and their policies reflect the sentiments of their constituents. The last thing Labour or National want to be seen doing is killing the golden goose of their wealthy, property-owning voters. So instead they fiddle round the edges. It’s why we get such a patch work of policy (think winter energy payments, best start package, fuel tax, etc.) as governments struggle to cover the gaping holes left by the ever present and ever growing dead weight loss created from housing speculation.

So why is it that young people do not vote in anywhere close to the same numbers of their older compatriots? The main reason given is disillusionment with politics. For all we have discussed above, you can certainly understand why, and as a result, our representative democracy is not that representative, looking after a select group rather than the country has a whole.

Unfortunately, we shouldn’t expect a change of heart from voters any time soon. After all, when the average voter is confronted by a question on policy, their primary response is, “is this policy fair on me?”. Translation; do I benefit or not? Until young voters cotton on to the fact the deck is stacked, they will continue to be the piggy banks for their wealthier, older, landed forebears.  The longer we wait, the rockier the ride will become.

Young voters actually have the capability to make change now.  As Bernard Hickey pointed out in a recent article, New Zealand’s demography is much younger than many think.

“if 18-35 year olds increased their enrolment rates and voting rates they would quickly overwhelm the 45-65 age group. That more bottom-heavy (or at least less top-heavy) structure of the voting population has the potential to change the electoral map for a generation if one or more party can get the young into the voting booths to vote for them”

So, young people of New Zealand, the ball is in your court. Do you want to continue to bankroll Winston Peter’s Superannuation, or would you rather live in a society built on a foundation of fairness, where all New Zealanders have the opportunity to rise?

Andrew Courtney is with The Opportunities Party