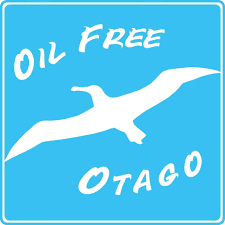 Oil Free Otago congratulates the Prime Minister Jacinda Ardern and her Government for ending new offshore oil and gas exploration in Aotearoa NZ, and calls for them to go a step further and ban current permits for new oil or gas exploration, including the Barque Prospect off Oamaru.

“Today’s announcement is a great step forward for all of us, young and old. We would like to thank all our supporters over the years who have put enormous effort into opposing Anadarko, NZ Oil & Gas (NZOG), Shell, Beach Energy, OMV and others. This is your day.” Oil Free Otago’s Rosemary Penwarden said.

“Really, it is everyone’s day, because it is a win for the planet, home to us all, a win for the albatross, Oil Free Otago’s adopted logo, and a win for all the sea creatures we have worked for many years to protect from oil and gas drilling.”

The government today announced that onshore oil and gas exploration will continue in the Taranaki region and that current permits elsewhere will not be stopped. That means that exploratory drilling in NZOG’s Barque Prospect off Oamaru and in OMV’s prospect in the Great South Basin, recently purchased from Shell, may still go ahead this coming summer.

NZOG (recently purchased by OG&G, Singapore based so not a NZ company) are struggling to find an investor for the Barque Prospect which they describe as a “game-changer” for the region, emphasising it is likely to be gas, the so-called “clean” fossil fuel.

“What the industry fail to mention about natural gas are the fugitive emissions or methane leakage that comes from every new oil or gas well.”

Natural gas is mostly methane before it is burned, a very potent greenhouse gas – calculated to be around 86 times more potent than CO2 over a 20 year period. Recent research from Harvard shows that methane leakage from gas production and delivery in the US rose by up to 30% in the 12 years up to 2014. Many studies besides the Harvard one find that even a very small amount of methane leakage from gas wells and transport systems can have a large climate impact—enough to cancel out any emissions advantage gas may have over coal.

“So the timing is all wrong for gas” Ms Penwarden explains. “For a start, it’s too late. It takes up to a decade or more for a new discovery to reach the commercial stage, then the well could produce for many decades, long past the time by which we need to have reached a zero emissions economy. Second, the South Island has no infrastructure for gas. Why would our government and regional councils spend millions now on new gas infrastructure that will be obsolete before it even gets used?

“Third, why invest in drilling for and using new gas when we could be using that money now on renewable technologies?

“Fourth and most important: climate change is here now. We don’t know for sure if we’ve reached a tipping point that will lead to unstoppable climate breakdown, but for NZOG to drill for new gas now is reckless if not criminal.
“If the government is not going to stop NZOG and OMV then we, the people, will. Today we celebrate a historic win. Tomorrow we continue the fight. Let’s hope these companies read the writing on the wall, pack up now and go home. We have an exciting new clean energy economy to build.”