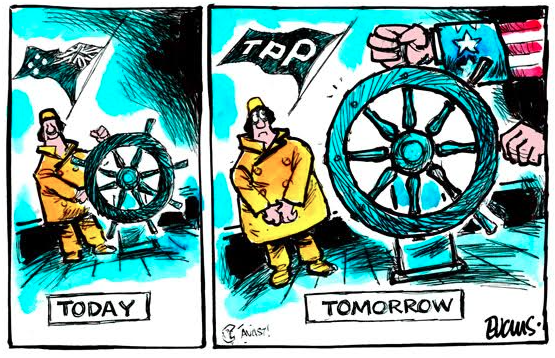 Trump talks of re-joining TPPA, Government must tell NZers if the TPPA-11 is its bottom line

US President Donald Trump instructed his National Economic Council Director and the United States Trade Representative to look into joining the Trans-Pacific Partnership Agreement that he quit just over a year ago. This follows his earlier suggestion that he would consider doing so, provided its terms were made more beneficial to the US.

‘Labour and New Zealand First, having opposed the original TPPA, justified their u-turn by claiming the TPPA-11 is a significantly different deal. Now they face the prospect of being asked by the US to go even further’.

Parliamentary submissions close next week on the revised Comprehensive and Progressive Agreement on Trans-Pacific Partnership between the remaining eleven parties, in which 23 of the original provisions have been suspended.

‘It won’t be good enough for the government to say the entry of the US is hypothetical or that it can’t show its hand ahead of such negotiations. Parliament is about to consider an international agreement whose fundamental terms may be about to change.’

‘The government needs to tell New Zealanders if it would veto the reactivation of the suspended items, such as those that would gut Pharmac’s bargaining power with the pharmaceutical industry, and whether would it even consider discussing additional concessions to the US beyond the original TPPA.’