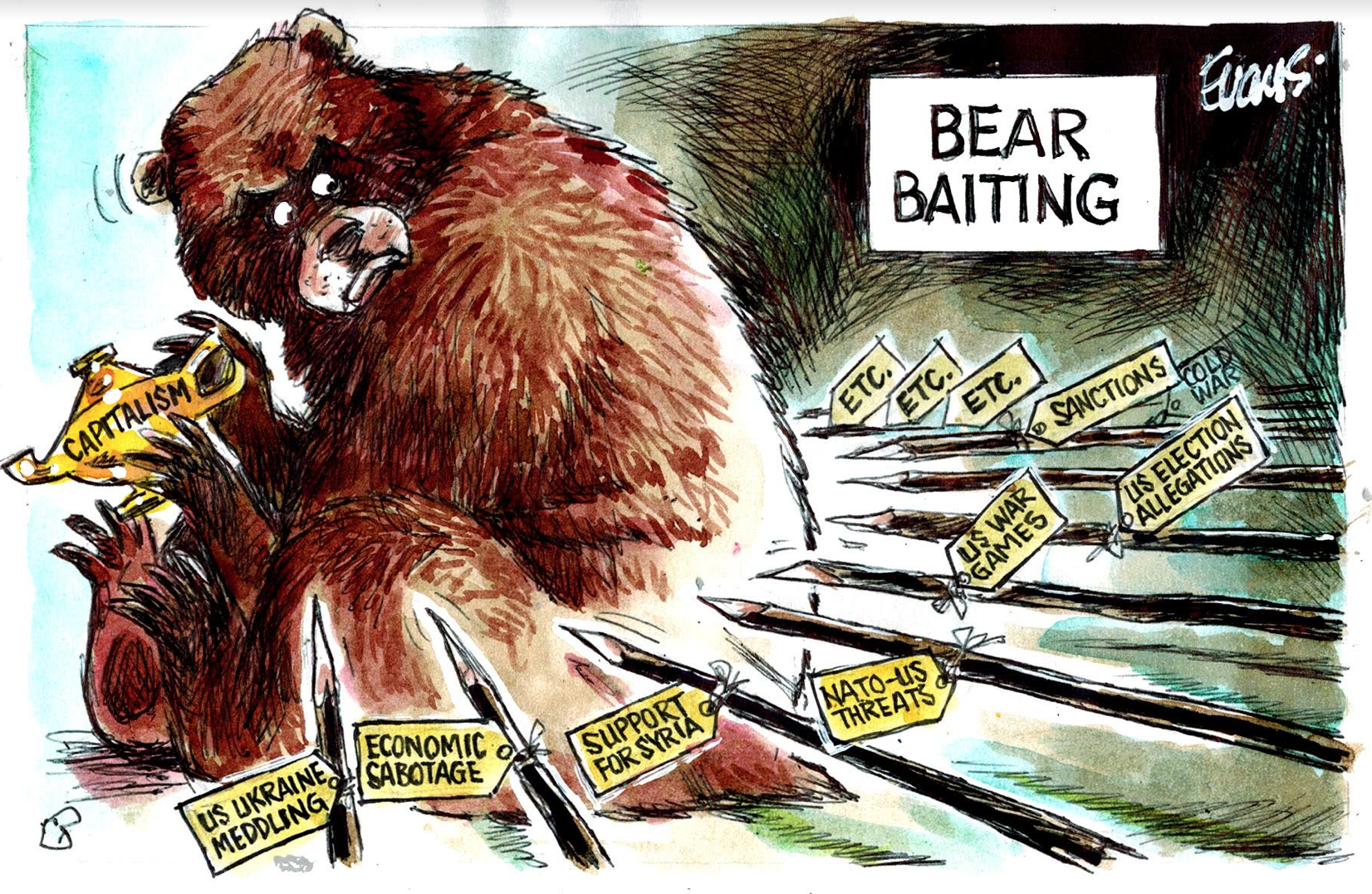 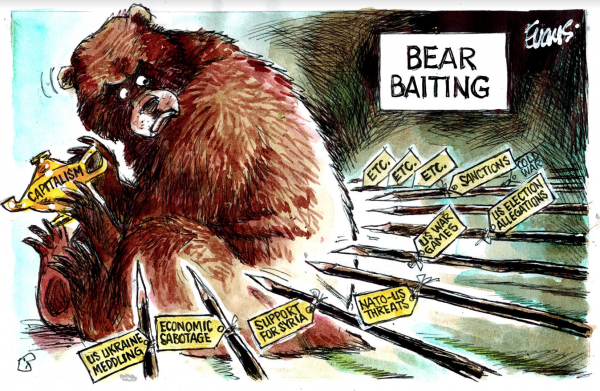 BEFORE CRITICISING THOSE who continue to treat Russia as an “evil empire”, I should first explain why I don’t. It’s not only because I know that without the extraordinary sacrifices of the Russian people during the Second World War (twenty million dead!) the United States and British Empire losses would have been much, much higher. It is also because our side – the West – has consistently demonstrated the most appalling bad faith towards the Russians. How any nation on the receiving-end of such strategic malevolence could end up being anything other than defensive and mistrustful is difficult to imagine.

Consider the fact that the Manhattan Project (the United States and British effort to create an atomic bomb) was deliberately kept secret from their Soviet allies. A weapon which, had it been used against Nazi Germany, could have saved millions of Russian lives (as it almost certainly saved millions of American lives when used against the Japanese) was withheld from the nation that was doing all of the heavy-lifting against fascism.

How would you have reacted to the news that your allies were developing a new super-weapon without you? Do you think it would have increased your level of trust in the USA and the British Empire? Or, would it have pushed your paranoia to new heights? Would it have caused you to be relaxed about the political complexion of post-war Eastern Europe? Or, would it have led you to create a series of socialist buffer-states under strict Russian control?

Never forget, the Cold War began at a time when the Soviet Union lay in ruins: its people and economy utterly exhausted; and its armed forces completely vulnerable to the USA’s growing stockpile of atomic weaponry. Was Joseph Stalin really going to risk the total annihilation of what remained of the Soviet population by ordering the Red Army to advance all the way to the English Channel?

It is also worth remembering that even after the Soviet Union acquired its own atomic weapon in August 1949, not one Russian combat-boot was ever set upon the soil of the so-called “Free World”.

Fast forward to the collapse of the Soviet Empire between 1989 and1991. Was there ever a more auspicious moment to turn the page on mutual and assured destruction and demilitarise the entire European continent? The last Soviet leader, Mikhail Gorbachev, certainly believed that such a moment was at hand. He sought – and was given – the personal assurance of the American president, George H.W. Bush, that the Nato powers would not attempt to fill the power vacuum created by the collapse of the Warsaw Pact.

Did Nato keep its promise? Like hell it did! Within the space of a very few years, Nato powers ringed the territory of the Russian Federation. Stalin’s worst fears were now the new Russia’s strategic realities.

And that wasn’t the worst of it. With the collapse of communism, the Russian state and its vast portfolio of publicly-owned industries and natural resources was asset-stripped bare. With the “help” of the West’s economic “shock therapists”, the Russian Federation was transformed into a corrupt kleptocracy: a “mafia-state” ruled by a collection of “oligarchs” whose twisted characters Dostoevsky would have struggled to depict. Not surprisingly, the life-expectancy of the average Russian began to track backwards.

This was the Russia that greeted Vladimir Putin when he was finally in a position to replace the Western powers’ favourite drunk, Boris Yeltsin. Was Putin, a former KGB colonel a hard man? Yes, he was. But after the democratic delights of the Yeltsin years, a hard man was exactly what the Russian people were looking for. Was his arrival generally considered to be bad news for Russia’s oligarchs? You bet! Especially after Putin arranged for one or two of them to be put on trial in cages – to encourage the others. Was anybody in Russia, aside from a handful of Western-aligned politicians and journalists, unduly upset by their President’s actions? Not really. Not when soaring oil and gas prices were delivering higher living-standards to millions of ordinary Russian citizens.

A prosperous and self-confident Russian Federation under strong political leadership was not, however, in Nato’s script. The deep-state denizens of the Western alliance looked at their maps and concluded (as so many geopolitical strategists had done before them) that the best way of getting their hands around Russia’s throat was through Ukraine.

Putin watched with growing alarm as Ukraine’s very own colour revolution (i.e. Western-inspired protests followed by a Western-assisted election campaign) installed an anti-Russian regime just a few hundred kilometres from Moscow. When Putin’s pushback resulted in the creation of a Moscow-friendly government in Kiev, the West upped the ante. With the blessing of European Union leaders, neo-Nazi hoodlums were unleashed on the streets of the Ukrainian capital. The pro-Russian Government fell. For the first time since the end of World War II, the West accorded diplomatic recognition to an overtly fascist regime.

We all know the rest. Russia annexes the Crimean Peninsula. Russian-speaking Ukrainians rise up against the fascists in Kiev. Russian volunteers cross the border in support. The West imposes sanctions and moves armoured units eastwards to “head-off Russian aggression”. Russian hackers of undetermined political status attempt to set off a colour revolution of their own. Donald Trump is elected President of the United States.

Do I really need to write any more about the sort of people who denounce the Russian Federation and its leader? Or why I am so loath to join them?