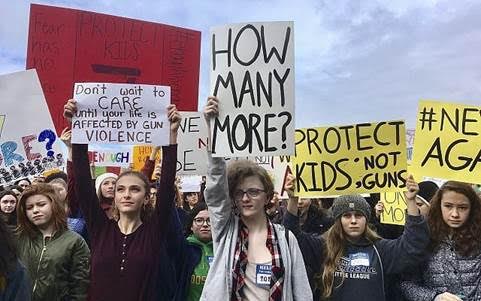 AS I WATCHED HUNDREDS-OF-THOUSANDS of young Americans marching for their lives on Saturday 24 March, these were the words in my head.

And you, of tender years,
Can’t know the fears that your elders grew by,
And so please help them with your youth,
They seek the truth before they can die.

Teach your parents well,
Their children’s hell will slowly go by,
And feed them on your dreams
The one they picks, the one you’ll know by.

Yes, I know, the song “Teach Your Children” is nearly 50 years old. Even so, there’s something so bitter-sweet about Graham Nash’s composition; something so touchingly intergenerational and solidaristic; that the Crosby, Stills, Nash & Young hit simply took up residence in my skull and refused to leave.

Released in 1970, on the CSNY album Deja Vu, the song climbed to No. 16 on Billboard’s Pop Singles Chart. Tellingly, the social and political context of “Teach Your Children” was every bit as polarised as that into which the March For Our Lives organisers decanted so many young Americans last weekend.

In the same month that the song was released, May 1970, Ohio National Guardsmen at Kent State University had opened fire on unarmed students protesting President Richard Nixon’s invasion of Cambodia, killing four and wounding nine. CSNY band-member, Neil Young, upon learning of the so-called “Kent State Massacre”, sat down and composed “Ohio” which was recorded and pressed with record speed to come out just days after the release of “Teach Your Children”.

From both an emotional and a political standpoint, the two compositions could hardly have been further apart. Nash’s “Teach Your Children” speaks tenderly to the shared hopes and fears of young and old alike, and to the need for honest communication between the generation of “parents”, who had grown up during the Great Depression and World War II, and their post-war baby-boom “children” (the oldest of whom were then in their early-20s). Young’s song, by contrast, is a raw and angry cry of protest, capturing perfectly the shock and horror of witnessing “Amerika” – “The Establishment” – literally turning its guns on its own children.

We’re finally on our own.

This summer I hear the drumming,

The huge achievement of the young organisers behind March For Our Lives is to have recognised in the National Rifle Association (NRA) and its political enablers, the same malign constellation of social and economic forces responsible for visiting the Vietnam conflict upon American youth fifty years earlier.

The same glorification of physical force that gave rise to such obscene military expressions as “body count” and “search and destroy mission”, is today locked and loaded into the political Right’s fanatical reverence for the Second Amendment.

The same authoritarian, quasi-fascist, worship of toughness which mandated full-scale war in Indochina, manifests itself today in the compulsive need of all those Americans who cannot cope with difference to amass deadly “defensive” arsenals of semi-automatic weapons and handguns.

And just as the 1969 My Lai Massacre made clear what happens when young men are encouraged to believe that the hearts and minds of civilian populations are best won by pumping them full of lead; the deadly, twenty-year epidemic of US school shootings has demonstrated the horrific consequences of arming the narcissism and nihilism of alienated and aggrieved young men at home.

The assignment which today’s young anti-violence activists have taken on is, however, a much tougher one than the anti-war crusade of their parents’ generation. The decision to fight “international communism” in Vietnam was strategically and politically motivated. As such, it could be reversed and the war it propagated brought to an end. America’s gun culture is a considerably more intractable phenomenon. Born out of White America’s deeply-entrenched fear and hatred of “the other”, it can only be successfully overcome by completing the cultural revolution begun in the 1960s.

This is a very big ask for 15-20-year-olds. In a very real sense, the political history of the United States since the end of the 1970s has been the history of the American Right’s unceasing effort to halt and roll-back the kinder, gentler America that Graham Nash, and thousands like him, were attempting to sing into existence in the 60s and 70s.

But, if the mission confronting this new generation of activists is enormous, it is not impossible. Crucial to its success will be the extent to which today’s young activists are able to teach their parents well. And that can only mean persuading them to confront the truth about what’s wrong: about what’s always been wrong; with American society.

Forty years of right-wing counter-revolution has left its mark on the Baby-Boomers. For too many of them it proved a lot easier (and much more profitable) to give up the fight for a kinder, gentler America. For those “of tender years”, the trick will be to convince their parents and grandparents that the March For Our Lives is a march for their lives too.

Gotta get down to it

Soldiers are cutting us down

Should have been done long ago.

What if you knew her

And found her dead on the ground?

How can you run when you know?