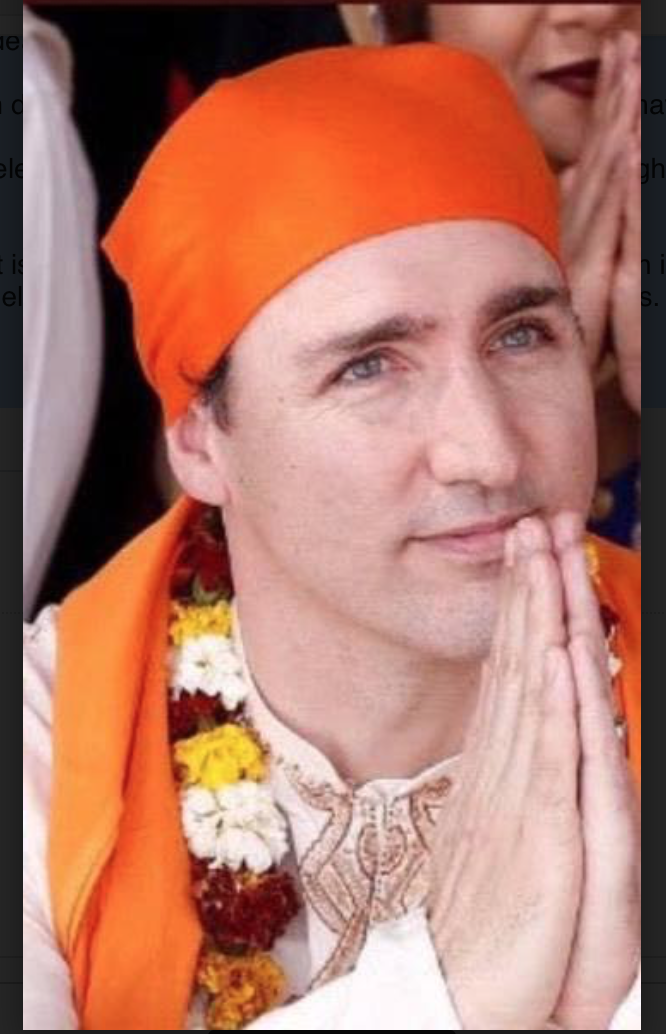 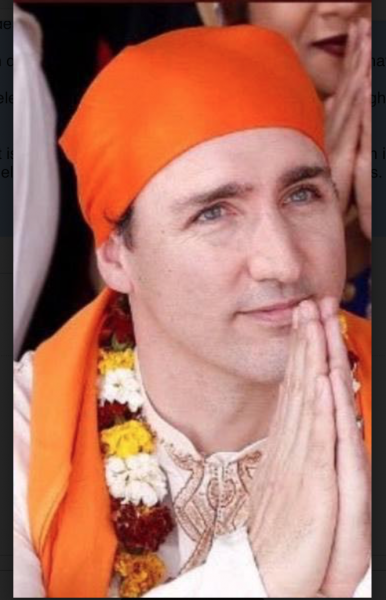 A brief word on this whole Trudeau thing. The recent one, I mean.

Now, I suppose the conventional wisdom of Western politics in this age is that to engage upon the surface in some modicum of the religious mores of another culture, another community of faith represents “tolerance”, acceptance, and understanding.

Perhaps it does. And certainly, it is a positive thing for our elected leaders and other representatives to be more broadly ‘culturally literate’ than their forebears, with an ability to engage with people of different backgrounds and theologies especially relevant considering the much less homogenous or monolithic nature of our contemporary societies.

But I must confess myself somewhat uneasy to see someone ‘going through the motions’ [literally, in terms of the hand-gestures and donning of certain garmentry, as it happens] of an expression of faith that is not their own, either as part of a general “do as those around me are doing” [and subject to changing dependent upon who’s “around” at the time], or part and parcel of a specific “outreach” programmme.

It is something oft-forgotten these days, that Religion is not simply a bunch of disparate ‘funny traditions’ of half-understood and much-misremembered vague and quasi-import attached to some Cool Stories from the relevant Mythology [Mythos, but I digress].

Instead, it represents – to both the individual and the community – some of the most deeply held and important beliefs (presuming you choose to subscribe to it, of course, rather than having some secular creed(s) in its place) about values, the world, and our place both within and in relation to both.

It is, in a word, quite literally “Sacred”.

So the idea that one can, without breaking a sweat or pausing for consideration, simply don and discard the outward forms of religious adherence in a manner akin to a corsage at a dance or something, is arguably anathema to it. In fact, at the more extreme end, the “a-word” for it would be “apostasy”. Although I’m not seeking to levie that particular charge in Trudeau’s direction, as it would require actual religious adherence in the first instance which is then abandoned to do so.

To be clear about this – there is nothing wrong with Trudeau seeking greater engagement with Canada’s various Indian communities. [Although the potential risk of providing some tacit support for Khalistan movement is something that must be taken into consideration here, given some of the vectors chosen]

But I am not so wild about religious mores being trotted out for photoshoots by those who do not earnestly believe in them; and I am still less eager when it comes to picking and choosing just *which* religious tropes one is keen to display from one corpus or another on a day-to-day basis in-line with the changing vicissitudes of the polls or whatever.

I can understand – and, indeed, in point of fact, empathize rather strongly – with the notion of taking an active interest in ‘comparative theology’, comparative mythology, and all the rest of it. It’s something I do myself, and it is a point of genuine pleasure and value to be able to discuss these things with a certain degree of aptitude and competency with, say, the Rev. Rolinson with some degree of fluency. [We’re *slowly* working on upskilling him with *our* theology, at the same time]

Yet I do not ‘trust’ a politician, or a celebrity [insofar as the two are distinguishable today] or anyone else for that matter who appears to flit between the barest reaches of ‘Traditions’, on a day to day basis.

To me, it does not seem to show someone who is “more engaged” with more people.

It simply shows someone who appears keen to display ‘quick and easy’ attempts at LOOKING “engaged” without necessarily seeking to put in the actual work to either integrate into a community or demonstrate genuine solidarity/empathy from without.

Now perhaps I have been too swift to judge in Mr Trudeau’s case, and upon further reading it shall turn out that he’s actually an avid student of the Dharmic religions who’s long had a grasp of India and Indian cultures.

If this is the case, and I have unfairly lumped him in with a number of other Anglosphere politicians who *don’t* have these sorts of things … then I truly and unreservedly apologize to him.

But even if it does not apply to Trudeau specifically, I still feel my point stands.

Religion is not a costume (although dependent upon your confessional sympathies, it may well feature one).

They are deeply held, essence-ial elements of who and what we are. Not to be taken lightly or insincerely in pursuit of temporal advantages in the psephological or corporate realms.

And from my perspective at least, it is difficult indeed to find myself more “trusting” of an individual who would appear to display otherwise via their conduct – treating those deep and oft-eternal elements as light and fleeting photographical fancies.

It is one thing to show respect.

It is quite another to pantomime.