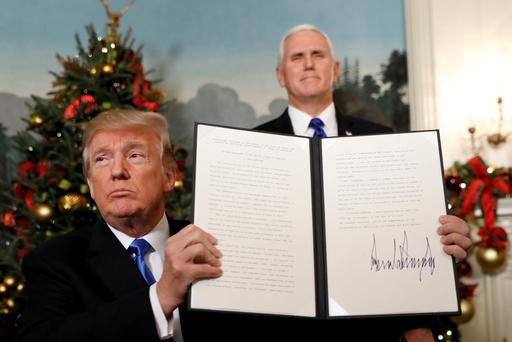 Donald Trump’s recognition of Jerusalem as Israel’s capital has produced a lot of hot air; not only from the President himself, but from the mainstream media, which seems stuck more or less in the same narrative it’s been in for decades.

The truth is, though, that Trump’s announcement may represent an important break in the status quo. One commentator, from the excellent Israeli website +972, has even claimed that Trump’s announcement equates to a new Balfour Declaration (the 100-year old announcement from Britain’s Foreign Minister, which gave huge impetus to the Zionist movement). This is a highly dangerous shift, but there is also cause for optimism.

If you’re reading this, you’re probably already familiar with the prevailing narrative. It’s the one that has Israelis and Palestinians locked in a highly complex, centuries-old conflict that can only be resolved through a negotiated “peace process”. Neutral-ish outsiders (notably the US) have been trying to achieve peace decades, their well-meaning efforts constantly thwarted by the conflicting parties, either/both of whom are for the most part uncooperative, bloody-minded and, of course, prone to violence. The prevailing narrative finds room for pro-Israelis and pro-Palestinians and for extremists and moderates. Rather than representing the truth, though, it has served as a smokescreen behind which a fundamentally unjust status quo is maintained.

I’m not going to deconstruct the whole narrative here. Plenty of others have done that far more eloquently than I can. But, I do want to bust a few of the myths that have been aired in recent days since Trump’s announcement.

Myth#1 “I’m just recognizing the facts on the ground”. Trump is saying, Jerusalem is an Israeli city, Israelis regard Jerusalem as their capital and the seat of their parliament. “Them’s the facts and I’m just living in the real world.” There is an appealing logic in this and, for sure, if you take a long historical view, it’s ultimately facts rather than fairness on the ground that matters (the international community is, after all, happy to recognize Texas as part of the USA). The international community has, however, never recognized East Jerusalem as part of Israel. Since its invasion in 1967, the United Nations and practically every country in the world has consistently condemned the ongoing occupation of East Jerusalem by Israel. Yes, it is a fact that Israel controls all of Jerusalem, but it is also a fact that is does so illegally (not to mention brutally). That is why no country til now has recognized Jerusalem as Israel’s capital and that is why Trump’s announcement is such a big deal.

But, along comes Myth#2, “it’s just symbolic, it makes no practical difference”. So, yeah, apart from the US Ambassador who won’t have to drive from Tel Aviv for meetings in Jerusalem, who cares? So, calm down everyone, there’s not need to make a fuss. For a start, the amount of “fuss-making” is grossly overstated (see Myth#3), but the more importantly the danger is not the Palestinian reaction to this announcement but the Israeli one. Only a fool would dare guess exactly what Donald Trump’s intentions were in making this announcement, but the Israeli interpretation was immediately clear. It is a policy signal. It is a message from the Americans that they endorse the occupation and are giving Israel license to maintain and deepen its control over East Jerusalem. The Jerusalem municipality understood this even whilst the announcement was happening as it beamed an image of a US-Israeli flag on the exterior wall of Jerusalem’s Old City (that’s in East Jerusalem, by the way) and the announcement was seized upon within just one day with the decision that illegal Israeli settlements in East Jerusalem would be expanded by a further 6000 housing units. We should expect to see further settlement expansion as well as an increase in house demolitions and confiscation of Palestinian land in East Jerusalem over the coming years. Such actions have often been blocked or delayed in the past by the Americans, who have never favoured a just solution to the occupation, but have sought to moderate it until now. So, clearly, this is about more than symbolism. But, even if it was, let’s not forget that it is not only Jews, but Palestinians too that crave Jerusalem as their capital, both with strongly valid historical claims. To recognize one set of claims but not the other, is a lop-sided symbolism at best.

That symbolism will lead to bloodshed, or so goes Myth#3, with many opponents of Trump’s decision justifying their position on the grounds that those pesky Middle Easters will yet again resort to violence instead of dialogue. And, yes, Palestinian youths in Jerusalem and Ramallah have thrown rocks and burnt tyres, and extremist groups in Gaza have fired rockets. They are, frankly, powerless to do anything else. At least this form of protest will make international news, unlike the many peaceful demonstrations that will go unreported. And, of course, Israel has responded with heavy fist, demonstrators have been sprayed with skunk and tear gas, young men (and children) arrested and a few retaliatory bombs have fallen on Gaza. But, the claim that this will result in a serious escalation in the conflict is a myth. It will not. Such violence as has been seen in the past week is commonplace and Palestinian leadership (outside of Gaza at least) is too fragmented and disrespected to organize anything meaningful. This will not lead to a third intifada.

Besides, what good would that achieve anyway? Palestinian leadership of the Yasser Arafat era learnt that a well-executed, well-supported campaign of violence and diplomacy could yield results (the Oslo Accords). Since then, however, both violence and diplomacy, as well as peaceful demonstration and attempts to build an international movement, have failed and the situation of Palestine has steadily worsened. The international community continues to support the “peace process”, but its cycle of optimism followed by failure has only emboldened Israel over time. It knows full well that it can outrage the international community once, twice, three times before returning to the peace table again for fresh talks that will again fail allowing its belligerent takeover of Palestine to continue step by patient step.

Trump’s announcement, though, has smashed once and for all, the lie that is the peace process. In doing so, he is enabling Israel to move apace toward its eventual goal of swallowing the two-state solution into a greater Israel. But, through his recognition of Jerusalem as the capital of one nation only, the US can no longer credibly claim to be anything like a neutral party. This is a potentially a significant event and the reason why, as I wrote back in February, many Palestinians were optimistic about Donald Trump’s election on the basis that tearing up the prevailing narrative, regardless of its immediate consequences, is preferable to the death-by-a-thousand-paper-cuts status quo.