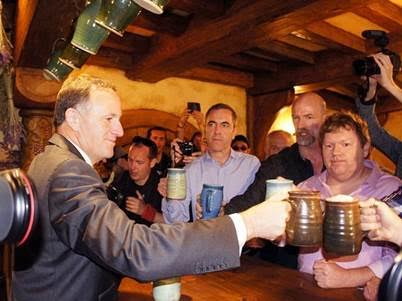 The Sleepy Hobbits of Muddle Nu Zilind with their king

Some noddy at stuff wrote a column this year criticising my use of the term ‘Sleepy Hobbits’.

For me the term sums us up perfectly as a nation.

In its most benign form it paints us out as an inward looking nation of dimwitted simple folk who can’t comprehend the bigger picture, in its darkest version, it illuminates the aggressively deep anti-intellectual fascism that violently destroys out of wilful insecurity.

This week has really reminded us just what a nation of sleepy hobbits we are.

Toxic drinking water,  foreign students effectively slaves, petrol price gouging, climate change rapidly getting out of hand and news that National underfunded public health so badly that it has gone into meltdown are all indicative of one thing – the legacy of our free market neoliberal experiment that deregulated every inch of our society.

That 700 000 NZers can get sick from their drinking water has occurred because there isn’t enough bloody regulation or enforcement of our water!

Petrol companies price gouge us because there is no means or will to force them not to.

Foreign students are being abused and used like slaves because no one bothers to regulate the student visa or student employment market.

We face a climate change nightmare because no one is brave enough to stand up to the Dairy industry and regulate them.

And National underfunded public health so badly for 9 years it is now in meltdown because no one challenged National’s free market mantra that saw public money going to prop up right wing experiments.

Normally one would feel a certain schadenfreude towards the sleepy hobbits of muddle Nu Zilind for the clusterfuck they have brought upon themselves, but such shameful glee in the misfortune of others is only gleeful if the target understands their own hand in their predicament, the sleepy hobbits of Muddle Nu Zilind don’t have the intellectual ability to comprehend how they have brought this upon themselves and if you attempted to explain it is the deregulated market they’ve unthinkingly voted for they would ask what ‘deregulated’, ‘market’ and ‘unthinkingly’ meant.

We are our own worst enemies.

Tolkien’s fantasy is much more realistic. His Shire is not overthrown by rampaging Orcs, but by the fear and greed of its own inhabitants. As the steadfast Farmer Cotton explains to Frodo:

“It all began with Pimple, as we call him … and it began as soon as you’d gone off, Mr Frodo. He’d funny ideas, had Pimple. Seems he wanted to own everything himself, and then order other folk about. It soon came out that he already did own a sight more than was good for him; and he was always grabbing more, though where he got the money was a mystery: mills and malt-houses and inns, and farms, and leaf-plantations. He’d already bought Sandyman’s mill before he came to Bag End, seemingly.”

If that doesn’t remind New Zealanders of the fate of their own beautiful country, then Martyn’s right, we really have become “Sleepy Hobbits”! Or, maybe, something even worse. Could it be that we, too, have fallen victim to our own Pimples, our own Ted Sandymans? That far too many of us have allowed ourselves to be ordered around by the Shirrifs? The Boss? By Sharkey?

We must hope not. Because in our own case – in our own Shire – we cannot rely upon four returning heroes to put things right. “Raising the Shire” is something we will have to do on our own. Forging our own swords. Stringing our own bows. Summoning our own neighbours. Only when we have fashioned our own horns and bugles will we, like Tolkien’s Hobbits in revolt, be able to send their clarion blasts echoing across New Zealand’s fields, towns and cities: