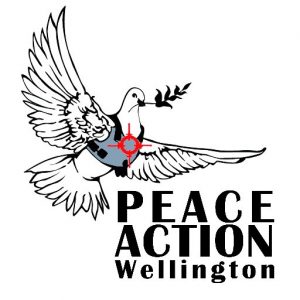 Peace Action Wellington have locked down the Australian High Commission. Peace activists have locked themselves to the gates of the High Commission preventing anyone from leaving, to draw attention to the situation of the refugees and asylum seekers on Manus Island. Refugees have been indefinitely detained by the Australian government in illegal camps and are now being forcibly moved into even more precarious situation.

On the 31st of October, the Manus detention centre was closed, leaving the people there with no food, water, power or medical care for the past two weeks. The people in the detention centre are now threatened with being forcibly moved by the PNG army and police to incomplete accommodation in a nearby town. The refugees want a long-term solution, they do not want to move to another prison – they want freedom.

“What Australia is doing is inhumane and that is why we are here locking down the Australian High Commission. The people on Manus need our help, they have committed no crime and shouldn’t be locked up for exercising their right to seek asylum,” said Emma Cullen, spokesperson for Peace Action Wellington.

This situation is unacceptable for both local people and the refugees. Local people on Manus Island were never consulted about the offshore detention centres and although the Papua New Guinean government has received huge payments from Australia, little of this has trickled through to local villagers. This has caused local unrest, as the lives of Manus Islanders have been disrupted by the centres.

“This is a humanitarian crisis of Australia’s making. Everyone has the right to seek asylum and the Australian government is not above the law. We are here today to stand in solidarity with the refugees and asylum seekers on Manus and to tell the Australian government that their actions are unacceptable,” said Emma. These refugees and asylum seekers have the right to be evacuated and resettled somewhere where seeking asylum is acknowledged and they will be welcomed into the community.

The Australian government, as a signatory to the 1951 UN Refugee Convention, is responsible for these refugees, regardless of how they entered Australian territory to seek asylum. Instead, the government brought them to Manus Island as part of their ‘Pacific Solution’ policy of preventing any people fleeing war or persecution from reaching safety in Australia if they seek asylum by boat. The Papua New Guinean Supreme Court ruled the detention centre illegal in 2016 because it breached the asylum seekers’ fundamental human rights, which is why it is now being closed.

“It is time for the New Zealand government to do more than offer to take 150 refugees from Manus or Nauru. Here in Aotearoa we have the capacity to help these men and we should be talking with the PNG government directly to solve this humanitarian crisis. Peace Action Wellington condemns Australia’s inhumane border policies that led to this situation, and the government must follow suit,” said Emma.