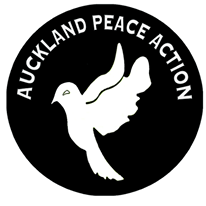 Auckland-based social worker Charlotte Wilson, who worked at the Manus Island detention centre for the Salvation Army from February 2014 – January 2015, has condemned the Australian government.

Wilson said, “As a Social Worker on Manus, I saw first hand the human cost of Australia’s policies. Four years ago, the situation was dire – the men were subject to abuse, arbitrary detention, severe physical and mental health issues, solitary confinement, arrest, and death. Men were pulling out their own teeth from infection. Self harm was occurring on a daily basis. There were frequent shortages of drinking water. Over four years later, I am filled with rage and heartbreak that the situation has deteriorated to this point under the responsibility of the Australian Government. It is absolutely clear that the Government of Australia has no regard for the lives, wellbeing or future of the men on Manus.”

Auckland Peace Action member, Hamish Noonan, said “We have been in contact with some of the refugees on the island, who are terrified and have been imploring the New Zealand government to intervene to save their lives. Yesterday the Papua New Guinea police destroyed the refugees’ sleeping quarters and water supplies. The police said they will violently remove the men at 11am (2pm New Zealand time) today. ”

Noonan said, “Auckland Peace Action is calling on Jacinda Ardern and the New Zealand government to talk directly with the Papua New Guinea government, to arrange for all of the Manus Island refugees to be resettled in New Zealand.”

Noonan said, “Jacinda Ardern will be seated next to Papua New Guinea Prime Minister Peter O’Neill at APEC today, but has said she won’t raise the issue directly with him. Jacinda Ardern must act now to prevent more harm being inflicted on these innocent people.”

Wilson said, “As a New Zealander, I want my country to stand up for human rights. New Zealand has the opportunity to be on the right side of history and bring the men on Manus to safety here as a matter of urgency, and to send a strong message condemning the Australian asylum seeker policy, which is the harshest in the world. The men on Manus have shown extraordinary resilience and dignity throughout their ordeal and deserve nothing short of safety, support and freedom while they rebuild their lives”.

Noonan said, “In the spirit of armistice day, the New Zealand and Australian governments needs to call off their war on refugees. Auckland Peace Action offers solidarity to the Manus Island refugees and supports their peaceful protests.”