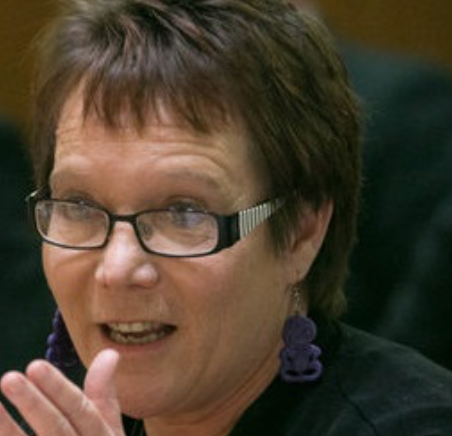 Tracey Martin – one of Parliament’s best kept “secrets”. One to watch out for as her career in politics is on the rise. Recently elevated to Deputy Leader of NZ First, she has the potential to increase her Party’s public approval

Nearly four years later, and my prediction has become reality. On 25 October, incoming Prime Minister, Jacinda Ardern, announced that NZ First’s talented Tracey Martin would be appointed to the new Labour-NZF-Green cabinet as a full-ranking Minister;

… Ms Ardern said New Zealand First’s Tracey Martin would be a strong advocate for children in her ministerial position, which also oversees Oranga Tamariki, the Ministry for Vulnerable Children.

I fully endorse Ms Martin’s appointment to this position. In this blogger’s own experience, Ms Martin should prove to be a dedicated champion to lift children out of the poverty-trap created after thirtythree years of the failed neo-liberal experiment.

In April 2012, Jazmine Heka took a petition to then Opposition MP and NZ First spokesperson for Children, Tracey Martin. The petitions called for;

There was wide-ranging discussion between Jazmine and Ms Martin with the MP treating her guest with respect. She listened to Jazmine for a full hour, discussing dental treatment in schools; food in schools; a warrant of fitness for all rental housing, and poverty in general.

As I reported at the time;

Ms Martin recalled when, in her youth, every school had a dental nurse and clinic-room on school-grounds, and children’s teeth were properly looked after,

“Our policy is that all children must have access to free dental healthcare for the period of their schooling.”

This blogger also reported Ms Martin’s willingness to draw from other political parties;

Ms Martin agreed and referred to a “brilliant speech” by Russell Norman (Green Co-Leader), where he revealed that government had lost $2  billion of of last year’s tax-take. She said, “three years of that and we wouldn’t have to sell any state assets“.

Had those tax cuts [2009 and 2010]  not happened, we could afford free healthcare for all children.

Ms Martin referred to the Mana Party’s financial transactions tax, which she said  Annette Sykes called “the Hone Heke” tax, and which “was worth looking at, and worth taking really seriously“. It was understood that such a FTT would have to be internationally implemented, as it might otherwise risk causing a capital-flight.

The strength of the Labour-NZF-Greens coalition are the core values which each constituent party has to offer. All three have constructive, forward-looking policies and dedicated, intelligent people willing to deliver them for a better future for our country.

If the willingness of a member of parliament to sit and listen to a sixteen year old is any indication, then our new Minister for Children has been an encouraging,  positive first step for our new government.

“Well, to keep that in the view, I would have thought. To make sure that it’s part of every conversation; how will this, downstream, affect children.“

If the Prime Minister was Minister for children, it was suggested, then as with US President, Harry Truman,  “The Buck Stops Here” on child poverty issues.

Jacinda Ardern has appointed herself Minister for Child Poverty Reduction. Hopefully, Ms Ardern and Ms Martin will create a powerful partnership with which to combat and eradicate the scourge of child poverty in this country.

Right-wing idiocy and mis-information has reached new depths in West Australia with the publication of a scurrilous piece of fake news/opinion, by conservative  so-called journalist and former The West Australian editor, Paul Murray.

In an error-laden, ratbag opinion piece on 25 October, Murray  suggested that homelessness and child poverty did not exist in New Zealand. He dismissed poverty and homelessness;

Well, I’d describe it as hyperbole. If they haven’t got enough to survive they would be dying.

An inquiry by the New Zealand Herald found Labour was using a very broad definition of homelessness by international standards and judged that claim “mostly fiction”.

While Labour used a university study showing 41,000 people were “severely housing deprived” — meaning sleeping rough, living in cars or garages, or in emergency or temporary shelters — official government figures for those “without habitable accommodation” was about 4000.

Which would be  inexplicable, considering  that  Bill English promised to cut child poverty by 100,000 during the election campaign last month;

If poverty and homelessness was a “fiction” as Murray asserted, then the Leader of the National Party promised on 5 September, in front of hundreds of thousands of viewers, to raise 100,000 non-existent children out of poverty. And the mainstream media bought it.

He also derided Winston Peters’ decision for his choice in coalition partner;

These themes were echoed by Peters when justifying his decision to bypass the Nationals who won 44.45 per cent of the vote and to install Labour which polled just 36.89 and only 43.16 when combined with the supportive Greens.

Murray omitted to mention that a Labour-Green-NZ First bloc represented 50.4% of the popular vote. Obviously basic arithmetic is not his strong point because 50.4% beats 44.45% every time.

But his outright misrepresentation of facts reached it’s nadir when he shamelessly claimed;

The NZ Nationals got debt down to 38 per cent of GDP compared to Australia’s 47 per cent. Watch that figure skyrocket.

Either Murray is woefully ignorant of recent New Zealand history – or he is wilfully lying. Anyone with even a basic knowledge of facts should  know that by 2008  Labour had paid down net debt to 5.4%;

National did not pay down debt. They grew it massively, fuelled by two unaffordable tax cuts (2009 and 2010) and shameless corporate welfare.

Never let facts get in the way of a right-wingers flight of fantasy.

This is the sort of rubbish that Labour, NZ First, and the Greens will have to deal with in the coming years.

The West Australian:  Opinion – Why the New Zealand poll experiment matters to Australia

The Standard:  After nine long years National discovers there is child poverty in New Zealand