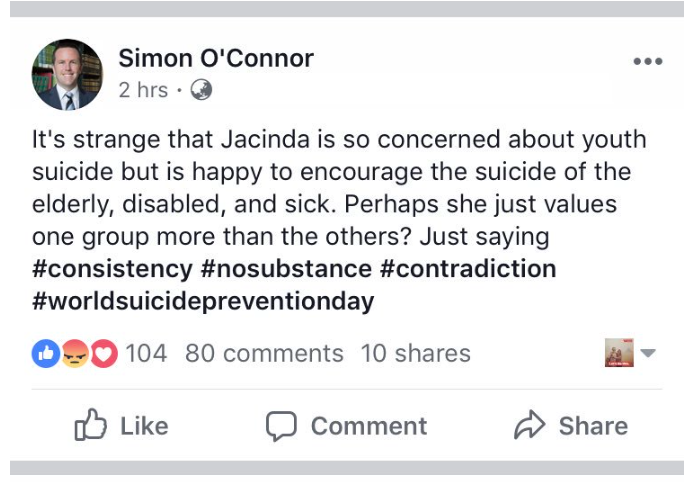 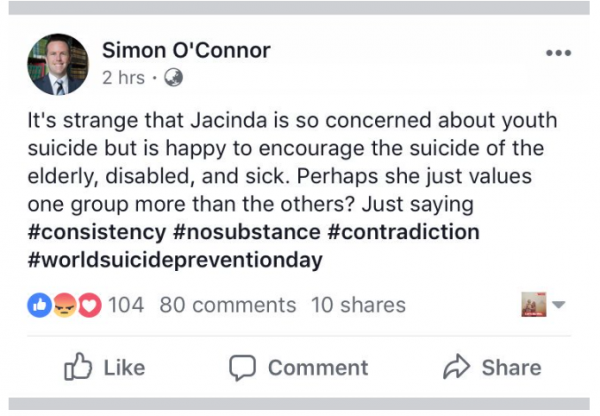 The desperation is really showing inside National right now. First Paula Bennett was boasting about taking away human rights, then Steven Joyce invented an $11.7billion fiscal hole in our budget that doesn’t exist and now National Party MP Simon O’Connor has come out and attacked Jacinda for weeping at a solemn suicide awareness campaign.

O’Connor claimed that Jacinda’s tears at the suicide memorial were strange because she supports euthanasia and went as far as to suggest Jacinda’s motives were driven to exterminate voting groups who don’t support Labour.

Just writing that makes me ill.

Under National, almost $2billion has been underfunded from health, especially mental health. Under National our suicide rate has gone up consecutively over the last 3 years. Under national we still have no suicide target.

For a National Party MP to come out and criticise Jacinda being moved by the pain and horror of our suicide rate for political point scoring shows how National have run out of basic human decency and empathy.

Labour have put together a comprehensive plan to see more mental health nurses in schools, to review the mental health system and to aspire for a suicide rate that is zero.

We deserve a Government that is not as callous and deceitful as the one that National’s MPs have shown us over the last week.

You can vote NOW! Do it for our country. Vote Labour.