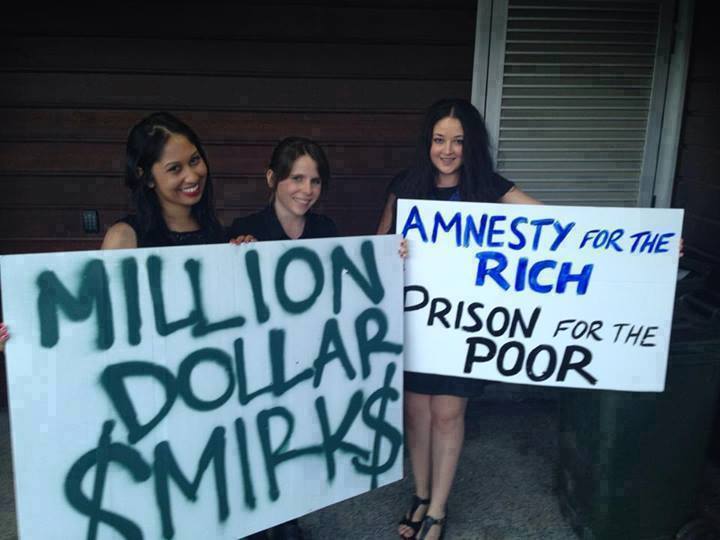 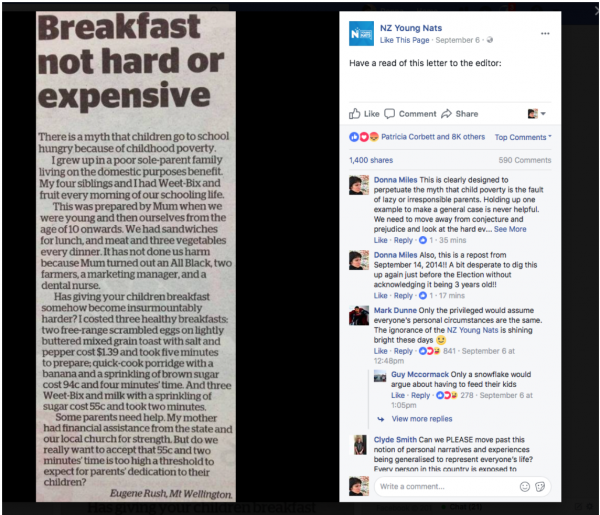 The Young Nats dug up the above letter from their archives and posted it on their Facebook page without acknowledging the fact that it was a repost from September 2014!!

Obviously, they are trying to blame lazy and irresponsible parents for children living in deprivation- another desperate and phony pre-election claim.

Recently Steven Joyce scored a spectacular own goal by dreaming up an $11bn hole in Labour’s budget. Perpetuating an old myth in order to mask the Government’s inaction on poverty is yet another own goal because it demonstrates the unwillingness of the Nats to understand and tackle poverty. 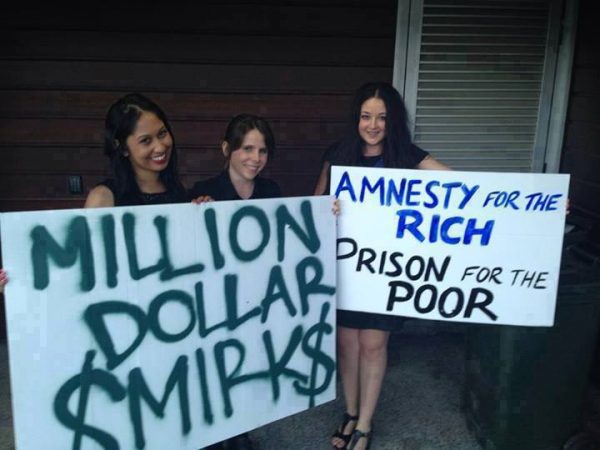 Did the Young Nats forget that their own leader has set a significant target for reducing child poverty? Doesn’t that, alone, prove that government policies matter and can make a crucial difference in levels of poverty in New Zealand?

It was precisely because of these types of ignorant arguments that, in 2015, child poverty experts, Jonathan Boston from Victoria University and Simon Chapple from Otago University, co-authored a book “The Child Poverty Debate: Myths, Misconceptions and Misunderstandings”.

In their book, the authors debunked popular myths around the existence of poverty and its causes in New Zealand.

In reference to blaming lazy or irresponsible parents, the authors argued that the higher levels of poverty in countries like the US compared to Scandinavian countries, show that government intervention can make a difference, unless of course we are willing to assume that Americans are born three times stupider and lazier than Scandinavians.

The increase in child poverty during the 1990s, when the benefits were reduced drastically, is another example of how policy impacts poverty.

Parents did not suddenly become more irresponsible in the 1990s. Also, it is the NZ Super that insures low levels of poverty among the pensioners, not the fact that people become less lazy on turning 65.

According to the authors, there is also evidence that “stress and anxiety caused by poverty are factors that contribute to poor parenting and harmful outcomes for children”.

Maybe, the real problem is that privileged Young Nats have bought into the myth of meritocracy, believing that they own their successes and, by extension, the poor should own their failures.

This cruel point of view completely disregards the cognitive ability and the circumstances that people are born into and the fact that most children born poor will remain poor and most people born rich will remain rich.

In medieval times the poor were referred to as “the unfortunate” for a good reason but the neoliberalists like to think of the poor as “losers”.

The reality is that poverty hurts us all.

Nobel Prize-winning economist Joseph Stiglitz argues that we all pay a price for poverty because of the impact that it has in so many aspect of our society: our democracy, our rule of law and our sense of identity.

Let’s hope, for the sake of our society, whoever gets into government next understands the importance of tackling poverty.