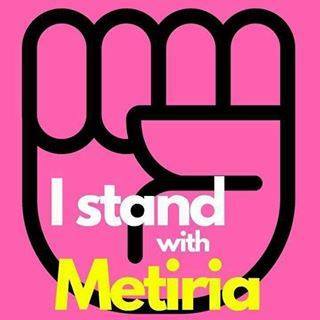 When I think back to where I was almost 24 years ago, no one – especially myself could have predicted the kind of woman I have become. I never conceived that I would be blessed with an outstandingly loving son, that I would be a director and co owner of a business, that I would find the courage to speak up publicly on issues which need to be challenged. 20+ years ago I only had the glimmer of a dream of where I would be now – and my life is nothing like how I thought it would be. I never thought my simple life would allow me to cross paths with, meet, and sometimes even become friends with the amazing people who are now in my life. I have made too many mistakes to recollect every single one – yet the lessons learned helped shape me, my compassion, my empathy, and my determination to make things better.

So Metiria did what she felt she had to do to get by. So she carried that on her shoulders for all these years – never forgetting about it, but certainly using the memory of that situation to push herself into a better place. So she misled a government agency over 20 years ago. I’m satisfied that 24yrs or however long ago, all she wanted to do was study, graduate, and take care of her baby – and yes, she withheld information about flatmates to do it. Whoopty shit.

From experience I know absolutely that when you live as a poor student, you’re focussed on the day to day, and week to week issues… the next assessment, the next application for some student scholarship or fund that you’ve heard you might meet the criteria for, sometimes a resubmit, and of course, your whānau and how your studying affects them in that moment. That’s student life.

I don’t believe for a second that she was thinking about becoming co-leader for a game changing political party. I can’t be convinced that she used a story about her situation back then as political leverage (she’s a smart cookie who knew the risk of this disclosure). I most certainly don’t feel she is unfit as a leader, or is an untrustworthy fraudster, nor do I feel ripped off – not by her at least. I feel NOTHING about this. Not a thing. I give no fucks that 20 something years ago, a person living as a pōhara, single parent, student, managed to get a few extra groceries by not declaring flatmates. It doesn’t even register on my richter scale of what is moral vs immoral.

I am NOT (hastag) Metiria. Nor do I wish to be. I don’t wish to be the 20-something year old Metiria back then struggling to make ends meet. I don’t wish to be Metiria today being vilified and dragged over hot coals now. I can’t even agree that 20 whatever years ago she “made a mistake”. No. She didn’t. It’s NEVER a mistake to do what you have to do to keep a roof over your head, put kai in your bubbas belly, and keep your head above water while you work on leveraging yourself into better opportunities. That’s ballsy. That’s determination. That’s strength. That’s badass-taking-care-of-shit. It’s a lot of things, but it’s not a mistake.

I could start on Jacinda, and talk about how utterly stupid she was for playing the self-righteous-goody-two-shoes-daughter-of-a-law-enforcer-can’t-condone-Metirias-survival-techniques Ardern, but I won’t. Her “relentlessly positive” mantra has truly become “positively relentless” (not my words but whomever said it first pipped me at the post). Less than a week in and she’s already made some silly calls – not backing a decent, hardworking, wahine toa such as Metiria is one of them. When women don’t back woman in spaces such as this, the Jacinda effect becomes over exposed and yawn inducing very, very, quickly. Remember ‘Yoncé, Jacinda – “to the left, to the left”. The catchphrase “Let’s do this” has (again less than a week in) become the voice of Jacinda saying “let ME do this” as opposed to the intended collective “let US do this”. Anyway, enough about Jacinda. It’s only my opinion so I expect the usual pushback when I offer up my thoughts – fracturing the left and all that. I’m just saying, don’t underestimate what might happen if students, women, Māori, and beneficiaries all decide to back Metz. I mean, Labour having a Māori deputy (whose ego won’t allow him to see how having two Te Taitokerau M.P’s – him AND Hone – front bench is beneficial to his people) is not going to help anything. But hey, I digress. Back to the Greens.

I finally saw James Shaw as more than a numbers man. He actually stood for something and did it with conviction. Finally. Don’t worry about the two that resigned (kinda – how does one resign with retention of full benefits – is THAT not fraud? – I’m confused). The Greens have more than enough members hungry to take a step forward. It’s unbelievable that these men would pull this kind of shit when they know damn well that there are internal avenues they could’ve and should’ve taken. It’s also a bad move to put forward a “she goes or we go” ultimatum when they themselves have up and coming young talent nipping at their heels, yet they don’t seem to have contributed a whole lot in this campaign to justify their party listings. Their actions not only backfired, but they clearly weren’t expecting their point blank bullets to ricochet and hit them square between the eyes. Goneskies, and no one from the Greens is even looking back – nor should they with election day looming. I’ve forgotten their names already. Move on.

Metiria, kia kaha. Nevermind the media. Nevermind the resignations. Nevermind the naysayers. As a NON Green Party member, I believe YOU are exactly the kind of person – flax roots, resilient, sleeves-rolled-up, practical and intelligent, that I want to see representing us.