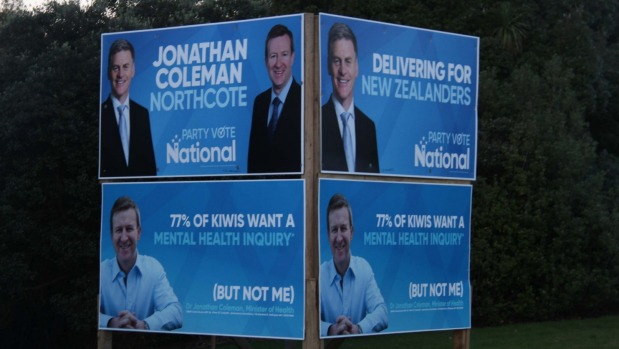 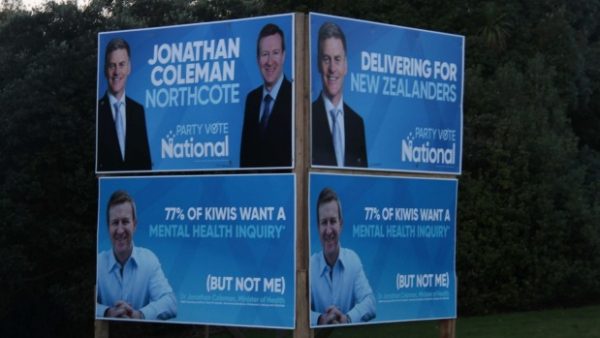 Billboards highlighting the fact that most New Zealanders want an inquiry into the public mental health system have sprung up overnight in the Health Minister’s Northcote electorate.

Community campaign group ActionStation have claimed credit for the covert action after Health Minister Jonathan Coleman dismissed the recommendations from The People’s Mental Health Review which the group released earlier this year.

“Instead he dismissed the 500 people who submitted stories of their experience of the mental health system and the 10,000 people who supported the report’s’ recommendations as ‘anti-government protesters’.”

The signs satirise National Party’s billboards and feature an image of Minister Coleman with the slogan ‘77% of Kiwis want a mental health inquiry (But not me) – Dr Jonathan Coleman, Minister of Health’.

Independent polling conducted by Colmar Brunton for ONE News released in June showed 77% of New Zealanders think there is a need for an independent inquiry into mental health and support services in New Zealand.

Earlier polling conducted by UMR in May showed only 1 in 10 New Zealanders thought the Government was doing enough for mental health system.

“It’s clear that our mental health system is currently under strain and desperately needs more funding. The Government’s current hands-off approach isn’t working. It’s time the Minister is reminded of his responsibility to do more to save lives,” concludes Elliott.